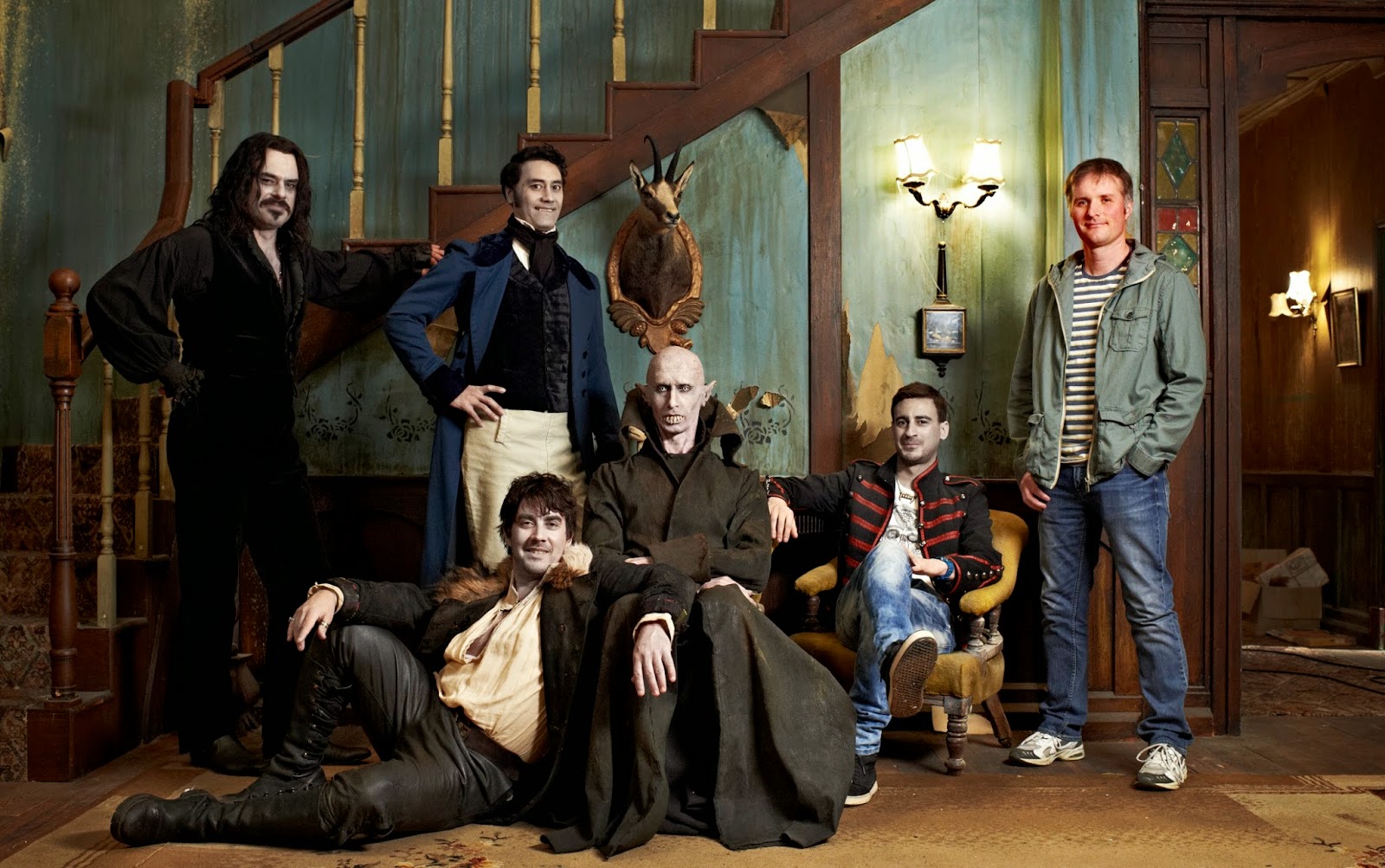 STUpendous – What We Do In The Shadows

There are some ideas that are pretty hard to make fresh and interesting. Sitting firmly among those ideas are Mockumentaries and vampire stories. Mockumentaries have been experiencing quite a heyday since Spinal Tap and the Christopher Guest films came out. Now, it seems like half the movies seen are either mockumentaries or found footage films, and most TV shows borrow from the signature style. Vampire stories, of course, exploded onto the scene around the time of Twilight and still haven’t quite disappeared yet. Rightfully, What We Do In the Shadows should feel bland and overdone, but somehow, it works incredibly well.

It’s not just the genres it employs that have been already done to death. Its specific premise of a documentary crew following murderer(s), that by all rights should be reported to someone, was first utilized in Man Bites Dog and was used again in later works like Behind the Mask. Following that, it’s not even the first horror/comedy to use this very specific premise.

Regardless, What We Do In the Shadows just manages to work by blending these elements with the creators’ very specific type of dry humour. Directed, written and starring Taika Waititi and Jermaine Clement following Flight of the Conchords, What We Do in the Shadows uses the same awkward tongue-in-cheek conversations that contributed to the duo’s earlier success. Less dry than the far-less-popular-than-it-should-be Eagle vs. Shark, the film also benefits with some slapstick and over-the-top humour that blends well with the grim and gory imagery of the picture.

The basic premise of the film is that Viago (Waititi), Vladislav (Clement), Deacon (Jonathan Brugh), and Petyr (Ben Fransham) are ancient flatmate vampires in modern New Zealand who still dress like they’re out of a Dracula film and yet still have to blend in to get regular sustenance. Each one of their characters are expanded upon rather well, which continually sets the movie up for multiple in-jokes based on specific character traits.

Viago is the uptight one of the group and is an over-romantic vampire reminiscent of the characters from Interview with a Vampire, with their dandy traits hyperbolized. He opens the film with frustrated pleas for Deacon to do the dishes since it’s his turn and they haven’t been done in five years. This eventually degrades into an argument of hissing and floating around the room.

Deacon is rebellious because he is currently the youngest and most rebellious of the group. He also holds a chip on his shoulder because, as a vampire created by the Nazis for warfare, he has dealt with a lot of discrimination and dislike.

The former lead hunter of the group, Vladislav, was formerly one of the great vampires but hasn’t been the same since he had a great battle with something the group calls “The Beast”. He is mostly based on Vlad the impaler (aka the inspiration for Dracula) but he was better known as Vlad the Poker since he tortured people using, well, pokers. This results in one of my favourite jokes of the film, where Vlad starts to use Facebook and gets very excited when he finds out he can “Poke” people.

Petyr is the creator of the three and is thousands of years old. Modeled after Nosferatu, Petyr is like a dementia-ridden grandfather that the group has to take care of out of loyalty. He never says a word, but a little bit into the film (after the filmmakers had enough fun just using the group’s chemistry for laughs) he introduces a plot into this film.

During one of their feedings, brought to them by the under-appreciated human servant/working mother Jackie (Jackie Van Beek), their supposed victim Nick (Cori Gonzalez-Macuer) escapes during an assortment of hilarious tricks done by the group and is “turned” by Petyr. Now automatically one of the group, Nick introduces the guys to the facets of modern life while they deal with his stupid and reckless rookie behavior.

Nick also introduces one of my favourite elements of the film, which is Stu (Stu Rutherford). Stu is a seemingly uninteresting computer programmer who becomes beloved by everyone he meets in the film. There’s never any real explanation for this, he’s just seen as the coolest by everyone who meets him in the movie. This is doubly impressive seeing as the group has never spent time with a human unless they were being used as a servant or food. I mean I really love this element of the film since the audience can not only relate to Stu, but somehow his boring and underwhelming personality has characters going off about how wonderful he is for the remainder of the film.

Once again, I can’t really capture just how funny this film is in text. Their chemistry along with their perfectly-rendered dialogue makes every conversation a minefield of laughs. That, paired with impressive attention to detail in horror folklore makes it a truer vampire film than most. The movie also is willing to get surprisingly gory which is not only a good nod to horror fans, but also usually gets played for some big laughs.

Due to the variance of release dates, because of it being from overseas, I can’t really say whether I would personally count it as 2014 or 2015 film. Either way, it’s the best comedy I’ve seen for either year. I expect this one to be added to people’s ritual Halloween must-watch lists.