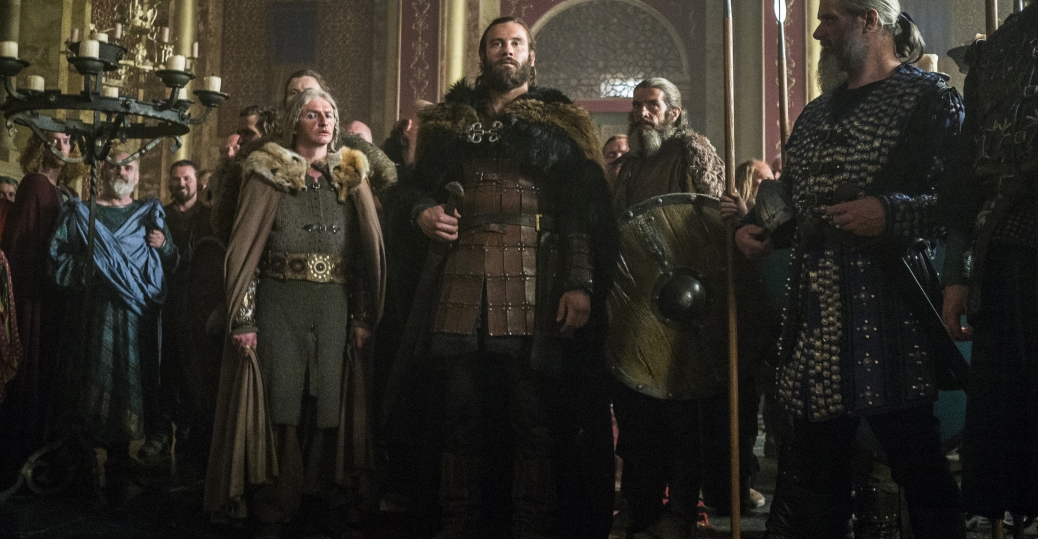 After a mostly strong season, the third season finale of Vikings, called “The Dead” was a bit of a let-down. While it paved the way for a lot of action for Season 4 (which is already confirmed), it also left a lot of problems from this season floating around and was unsatisfying. (spoilers ahead)

The season had been leading up to the Vikings’ raid of Paris. Which they only partially succeeded in. At first, it was going to be a complete disappointment, with the Parisians paying the Vikings to go away, which while historically accurate, doesn’t make for especially exciting TV. But of course, Ragnar had some tricks up his sleeve. The newly baptized Ragnar faked his death, convinced the Parisians to give him a Christian burial, then burst out of his coffin, and let his warriors into the city. It was a brilliant move on Ragnar’s part – his people were able to raid parts of the city, and it could also be used as an excuse to justify his baptism to his subjects who would otherwise take issue with their king being a Christian.

However, it does leave several gaping questions. Was his conversion to Christianity just a trick? Probably not, because his reason for converting was to have a chance to see Athelstan in heaven. Their relationship was such an emotional focal point of the show, so it’s plausible there was truth in that. But here’s a tip for Ragnar: if you want to get into heaven, maybe don’t stab the bishop presiding over your funeral in the throat. I’m not an expert, but it’s probably frowned upon. Despite this bit of trickery, the Vikings didn’t have a total victory. It felt like a lot of time was focused on this one raid that ended with what was pretty much a draw. (By the way, historically, wasn’t the fake funeral something Bjorn was credited with pulling?)

Another question is why isn’t Ragnar actually dead? He fell off a giant wall over a month ago(in the show’s timeline) and is suffering from severe internal injuries. Realistically, given the medical treatments that would be available at the time, Ragnar should be dead. He’ll probably die next season; Michael Hirst has said enough times that he has always envisioned the show going on without Ragnar, and there is a sense of impending doom hovering over Ragnar in almost all his scenes.

“The Dead” felt like stalling. It was too late in the season to launch into anything too heavy, but there was still one more episode to fill, so things happened. Things like exploring Count Odo. Count Odo in charge of defending Paris, and was a decent minor/supporting character. But inexplicably, it was revealed that Odo is into some adult stuff when he takes some minor noblewoman to his creepy sex dungeon. Yes, Odo has an actual sex dungeon. Why? Why? Why was this something that someone decided the audience needed to see? If the writers decided to expand Odo’s character, why in this way? The whole thing was random and made no sense in the grander scheme of the episode. It’s not clear if the aim of the scene was to be dark, or edgy, but there are other ways to do that, and with characters the audience actually cares about. (If the aim was to be sexy, they failed. They failed big time).

Instead of killing time by more mindless violence against women, the show could deal with some of the other storylines it has running in the background. Like the unholy alliance between Kalf the usurper and Erlendur. Although Kalf overthrew Lagertha and is clearly scheming to overthrow Ragnar, he’s still part of Ragnar’s inner-circle. And Erlendur – the son of King Horrik, who Ragnar killed at the end of Season 2- has had all season to get revenge, but he instead spent most of it lurking. Lurking and being mean to his wife.

One of the things that’s great about Vikings is you have to pay attention and remember minor characters or storylines because they pop up later. The not so great thing about this is they pop up a season later, and there are so many other things going on, it’s hard to get properly invested in a grudge or scheme from so long ago. Erlendur will probably play a part in next season’s drama. But since so little time is spent with Erlendur, if he does backstab Ragnar, it’ll be less “there goes Erlendur avenging his father” and more “there goes the Lurker being a jerk”.

Speaking of lurking jerks, Ragnar finally revealed to Floki that he knows he murdered Athelstan. Why the dramatic reveal? The audience knew Ragnar was aware of Floki’s crime. By telling Floki he knew, Ragnar lost the advantage, which is a very un-Ragnar like thing to do. Ragnar is still wounded and barely able to move. Why ruin the element of surprise when he’s not in a position to extract the revenge he so clearly wants?

If this wasn’t enough of a mess, Rollo stayed behind in France to maintain a Norse presence. The Parisians instantly bought him off with the promise of land, a title, and the princess as his bride. In return, he has to defend Paris against Ragnar when he returns. This kind of thing has been done over and over again since the beginning of the show. It always ends with Rollo betraying Ragnar, then feeling terrible about it. After Season 2, when Rollo had a total breakdown then a subsequent reconciliation, it felt like his arc was moving forward, with him committing to his brother. Opening this door again is boring. If he actually betrays Ragnar, then his previous breakthrough is meaningless. Hopefully in Season 4, it will be revealed that Rollo took the deal with no intention of fighting his brother, but even then, why waste time trying to trick the audience into believing Rollo will betray Ragnar?

As an episode, “The Dead” was decent, but not great. As a season finale, it was disappointing. There’s the sense that a lot of things are about to happen, but that they are too big to delve into in a single episode. So the show hit a pause button, in a really anticlimactic way. Hopefully, Season 4 will live up to the promises made at the end of Season 3, and provide more satisfaction.