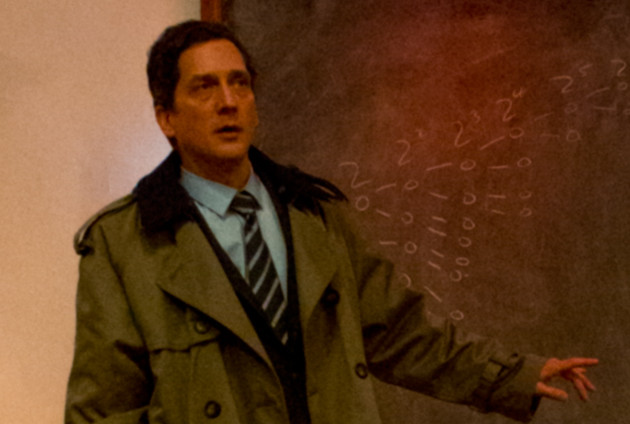 An evening spent discussing quantum physics might not sound like your cup of tea. But this year marks the 70th anniversary of the Hiroshima bombing, and Michael Frayn’s play Copenhagen, about the fateful 1941 meeting of two famous physicists in Nazi-occupied Denmark, strikes a very relevant note. Porpentine Players performed this challenging and timely play, directed by Jon Taie, in the Nave Gallery in Clarendon Hill Presbyterian Church, and it was a great evening of pleasantries radioactively decaying into deep tensions and permanent rifts.

In 1941, Werner Heisenberg, German wunderkind of quantum physics, visited his old mentor, the Nobel Prize-winning physicist Niels Bohr, in the older man’s home in Copenhagen. Gone were the explosively fruitful years of the 1920s and 30s, when theoretical physics was making incredible leaps and bounds and transforming the way scientists of all stripes viewed the world. In 1941, European science was mired in politics and war, and this meeting between the German and the Dane was a highly charged one. Frayn’s play imagines a scenario in which the spirits of Heisenberg (R. Nelson Lacey), Bohr (Floyd Richardson), and Bohr’s wife, Margrethe (Ann Carpenter), meet long after their deaths, to attempt to discuss and explain exactly what happened that night, and what were the consequences for the two men, for their countries, and for the outcome of World War II.

A rough thrust stage was set up in the Nave Gallery (set/light/music design by Taie, set/graphics design by Sharon Lacey). Squares of gauze hung over the lamps, dimming the lighting, and a recording of gentle piano music permeated the background. This was Porpentine’s second show, and they were very attentive to details. The program was full of information, including descriptions of historic physics experiments, a brief summary of Heisenberg’s groundbreaking Uncertainty Principle, and a sobering retelling of the Hiroshima bombing. The set included a blackboard, used to great effect during scenes in which various equations and physical phenomena were explicated.

Unfortunately, although the space was appropriately intimate and versatile, it also greatly challenged the production. Voices echoed easily in the gallery, and the heating pipes clanked so noisily that it was hard at times to hear the actors. However, the performers soldiered on as best they could, bringing to life the ghostly memories of Bohr and Heisenberg. Lighting changes were particularly useful to indicate the multiple shifts back and forth in time.

Lacey’s Heisenberg was phenomenal. He captured the sweaty nervousness and anxiety the younger man experienced during the early greetings and exchanges, as well as his later (occasional) slips into the arrogance and stubbornness of smug youth. Most powerfully of all, Lacey viscerally conveyed the moral trap Heisenberg found himself in during the war: at the brink of developing a devastating weapon the likes of which the world had never seen, he held himself back (but didn’t quite quit) for mysterious and complicated reasons.

Sadly, Richardson’s Bohr sometimes lacked the sharpness to match Heisenberg’s quiet energy. While the real Niels Bohr was known for being ponderous and more staid than his young protege, the difference in pacing between the three performers was the production’s biggest issue. The mismatch was actually evident in the more casual, humorous scenes than during the deadly serious ones.

Carpenter’s tone felt sharper in her asides to the audience than it did in the “real time” conversations with the two men. While this lack of vitality could be explained by Margrethe’s socialized role as complacent-domestic-partner-of-revered-physicist, Carpenter could have been more pointed when delivering what would have been amusingly barbed pleasantries. Tentativeness, hesitations, and forced formality can be just as dynamic as furious arguments, and greater swiftness in the exchanges between all three characters would have enhanced much of the wit and humor in the text.

This is a difficult play to stage, with all the energy focused on three people whose speech is mostly grounded in complex scientific ideas. In order to dazzle, it would have needed to be absolutely crisp, clear, and audible, qualities challenged by the poor acoustics and lagging pace. Still, there were many great moments in this production, and I am very curious to see what Porpentine Players come up with next.