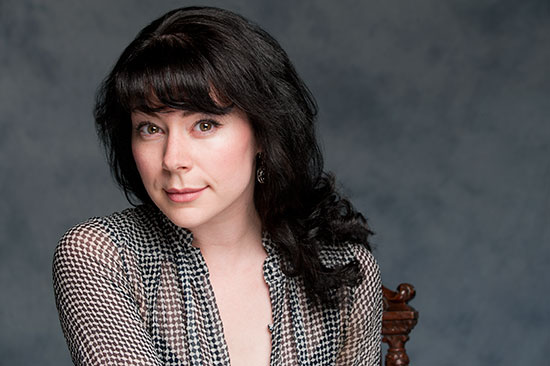 A consistent bright spot in the incredibly strong Shaw Festival company of players, the utterly charming Marla McLean shows off a huge range and host of great accents season after season but it’s her patented sweet-but-strong demeanour that she always seems to bring to our favourite performances. As the tragic Mary, Marla all but carried our least favourite Shaw production of the year on her sweet but strong shoulders.

Can you remember your first experience with theatre?
My first memorable theatre experience was a production at Neptune Theatre Company when I was 13. I remember A fantastic Physical Theatre Company called Jest in Time performing a show they had created and I was mesmerized. Having come from a dance background it was the first time I had seen theatre and strong physical work combined.

What actors and actresses have always inspired you? Are they the same today?
I find myself newly inspired regularly by those I work with or have the pleasure of watching. At the beginning of my career, while on the East Coast, I would name Nicola Lipman and Raquel Duffy as two of many I frequently found myself inspired by.

How did you get started at the Shaw Festival?
I started my career at The Shaw Festival rather suddenly after not receiving a general audition. I knew they were happening on a Monday, so the Thursday beforehand, I wrote Jackie [Maxwell, the Artistic Director] a hand written letter and sent it overnight. It worked! She was kind enough to squeeze me in on the Monday and I found myself in the Company for the coming season.

What was your first big role at the festival?
The first role that felt big to me was the role of Helen in Terrence Rattigan’s After The Dance. Hard Role, Hard Play. It kept me on my toes and helped me to realize there is always more to learn.

Tell us about your My Theatre Award-nominated role in Juno & the Paycock and working with Mary Haney as your mother.
I loved playing Mary in Juno and the Peacock! Coming from The East Coast, I felt a bit of kinship with these characters and their history. What happened to Mary, still happens today and the resilience of these women who continue to move forward in spite of such hardship is eternally inspiring.

The Shaw Festival is a den of accents with your nearly perfect Irish one topping the lot last season. What’s the trick to mastering a difficult dialect?
A den of accents, I love that!

We are immensely lucky to have dialect coaches for both private and cast work. The Irish was a treat as it has a bit of a maritime lilt to it, so I could let my own accent out to play while doing some hefty work on placement and vowel sounds with the very talented Sarah Shippobotham and of course we had Jackie Maxwell our director (who is Irish) there to tweak when we needed it.

It can be labor intensive, but always worth it.

What was it like working with director Jackie Maxwell?
I have done a number of shows with Jackie during my time at Shaw. I am a great admirer of her work both on and off of the Stage. To helm a ship the size of Shaw while continuing to create interesting and moving work is no small feat. I was pretty chuffed to be a part of her production of Juno and The Peacock. Its one that will stay with me for some time.

Do you have a favourite moment from that production?
The party scene with everyone on stage half in their cups singing Irish tunes (especially the duet I got to sing with the fabulous Mary Haney) was a favourite. And the final scene with Andy Bunker. A deceptively simple scene with a great partner.

The previous year you starred in one of the festival’s greatest recent successes- Peter Hinton’s Lady Windermere’s Fan. What can you tell us about that production and working with Peter?
Peter Hinton’s production of Fan was an exceptional experience. From the first day of table talk, I knew we were headed for a great adventure. Peter is innovative, laser sharp and constantly pushing boundaries. It creates a feeling of standing on a precipice, and as you jump into what is being created, you find yourself bolstered by tools you weren’t aware you had. I would work like this again in a heartbeat. It is both fear inducing and invigorating.

What’s your favourite role you’ve ever played?
You know, I can’t say. I have had the great fortune to play a wide variety of roles. From A tweeny in the kitchen to a Shavian woman. They have all brought me joy and have propelled me forward on to the next role in some way.

Do you have any dream roles you think are perfectly suited to you or something completely against type you’d love to try as a big challenge one day?
The dream roles constantly shift with age and circumstance and someone who has been in this business far longer than I said to me not that long ago.. That though we may have our heart set on certain roles defining us, We may find when we look back that it is the unexpected that challenges us to be better.

Who are some of your favourite people on the Shaw stage professionally and personally?
This question, I think is the most difficult! I am far away from my family and have spent almost a decade in this company. I count many of these folks as extended family. In regards to onstage… to name a small few… Jim Mezon. He is singular. Mary Haney. She has a range like no other. And yes, I am biased.. Graeme Somerville (My husband), shockingly intelligent both on and off the stage. This company is made up of very individual and multitalented people. I watch and learn every year.

What are you up to now/what’s next?
I have taken some time off as Graeme and I are having our first little one in July. So I will have the pleasure of seeing my friends and comrades take on this season with gusto and have a chance to see the fabulous work happening in Toronto.. While preparing for our new wee addition along the way of course!