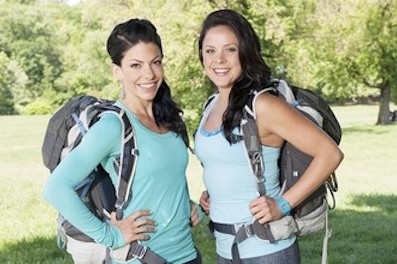 Before we announce the winners of the 2014 My TV Awards, we’re proud to present our annual Nominee Interview Series.

Season 25 of The Amazing Race was cut-throat with multiple teams that were primed to annihilate the competition (only to be beaten by a pair of ultimate underdogs). By far the most likeable of those front-runners were Kym Perfetto and Alli Forsythe, also known as “The Cyclists”. The fierce and funny pair fell out of the race way too early, ending up in fifth place after an ill-fated attempt at winning a surfing themed fast-forward but they were the only team from their season to score a My TV Award nomination for Best Reality Team so we think they’re the real winners.

Why did you apply for The Amazing Race?
Kym: After my brother and I applied for Survivor: Blood vs Water, we got a phone call. Except they didn’t want us for Survivor, they wanted me to be a part of an all female team for Amazing Race. So I recruited Alli and when we won cars, I gave mine to my brother as a little consolation prize.

What can you tell us about the casting process?
It’s a lot longer than you would think, considering the show is shot in just a month. We flew to LA for call-backs in December but didn’t get the word that we were cast until April!

Were you a fan of the show before you were on it?
Kym: YES. My little brother and I had actually applied for previous seasons.
Alli: I’d heard of it but hadn’t seen more than a few episodes. Once cast however, we watched nearly every one!

Have you seen every season? Who are some of your all-time favourite racers?
Alli: My team favorites are The Afghanimals for sure!! I also love The Twinnies.
Kym: I loved Marie & Tim, Afghanimals, Mark & Bopper, and any team that managed to have fun while racing.

How did you train for the race?
Alli: It was a multitude of mainly ridiculous things. We took trips together without a GPS, we raced down our street carrying massive bags of cat litter and even timed ourselves putting together IKEA furniture for practice. All while not telling anyone about going on the race.
Kym: Our neighbors probably thought we were crazy.

Do you feel like being cyclists and having such a physical job helped you on the race?
Alli: I definitely think it helped with navigation, spotting things and of course physical endurance.
Kym: When you’re riding fast as you can through the chaos of a city, you have to be aware of your surroundings and always be thinking two steps ahead.

What other qualities do you have that gave you a leg up?
Alli: Our strengths and weaknesses could not be more opposite – it made for a good team.

Did you have a strategy going in?
Alli: Well we wanted to lay low and underplay ourselves, but by the 3rd leg I think we were already seen as a threat.
Kym: In hindsight, it was a terrible strategy.

Were there any locations or types of challenges you were particularly nervous about encountering?
Alli: No way! Well, jumping out of a plane would have scared the sh*t out of me…but thankfully we didn’t have to go there!
Kym: She would’ve done it without hesitation. Alli likes having the sh*t scared out of her. She’s a full on adrenaline junkie.

What do you think were your biggest strengths and weaknesses as racers physically, mentally and in terms of your relationship with each other?
Kym: Communication. I am definitely the alpha between us but 50% of the time, Alli has better ideas. She struggled with putting her foot down. We only knew each other for 6months before going on the race. We communicate a lot more bluntly now.

Other than trying for that last fast forward, do you have any regrets about how you ran the race?
Kym: No.
Alli: No, I feel like we ran a pretty solid race.

What was your favourite leg?
Alli: I’m split on these two! Copenhagen because first of all, we won cars! Not to mention architecture was absolutely beautiful. I also loved Morocco because the culture there is beautiful.
Kym: I’d say Singapore or Malta. And yeah, Singapore even though we were eliminated. It was still a hell of a leg.

What was the hardest challenge you had to complete?
Simultaneously surfing for 2 minutes. It was what caused us to fall behind and eventually led to our elimination. We started to get the hang of it but that was hard. Even Bethany said she had her reservations about going because Adam had never done a fake wave before.

Watching it back on TV, do you feel like your edit accurately reflected who you are and how you ran the race?
Kym: Yeah!
Alli: I believe we got a pretty good edit. Kym and I just focused on our race, seeing the cities as much as we could and just having fun.

Is there a team you feel didn’t get a very accurate edit (either they were portrayed as bigger heroes or villains)?
Alli: I feel like The Amazing Race is one show where everyone is pretty accurately portrayed.
Kym: Honestly when we’re all racing each other, we don’t spend a whole lot of time getting to know one another. So it’s hard to say.

Was there anything that surprised you when you watched it back on TV that you maybe didn’t know was going on while you were racing?
Alli: Yes! When all of the teams ganged up on us on the ferry, we had no idea. We knew they maybe had been up to something, but we didn’t know that they were all making a master plan to U-Turn us.

Was there anything interesting that happened that didn’t make it to air?
Kym: I think they included most of the good stuff!

Once you arrive at the pit stop, what happens before you take off on the next leg? What’s the procedure?
Alli: We get taken to a hotel somewhere to rest up. The pit stops can last anywhere from 8-36 hours depending on the production. We never knew what was going on. If it was 36 hours, it was 36 hours of staying in one hotel room and alternating between eating and sleeping! Oh, and washing our clothes in the bathtub.

How serious were the rivalries we saw you develop along the way?
Alli: No major rivalries.
Kym: We just ran the race with a big ol’ target on our backs.

What’s the one thing you wish you had known before starting the race?
Alli: I wish that I knew how to heard sheep!
Kym: Surf.

Tell us something about being on the show that we don’t see from our living rooms.
Alli: Kym and I were food hoarders. Anytime there was leftover food, we took it, packed it and never thought twice about it. Food was hard to come by sometimes when you are racing. We didn’t want to spend our money on it.
Kym: We shared clothes, makeup and even shoes. I think everything was mixed up by the end of the race. Even bras and underwear.

Would you come back and race in an all-star season if asked?
Absolutely!

Would you consider doing another reality show? Which one and what would be your strategy?
Alli: I would definitely do Survivor if I had the opportunity. I think Big Brother might drive me crazy – and the kind of crazy that I don’t want aired on television!
Kym: Survivor. Anything adventure based. And Rupaul’s Drag Race. I think I’d slay.

Do you keep in touch with many of the other racers?
Yes, we are good friends with Tim, TeJay, Dennis and Isabelle. We had such a great cast of people.

What have you been up to since the show?
Kym: We are still racing and riding. We are about to fly to Australia and ride from Sydney to Melbourne! And every week I put out new videos on my YouTube channel: “KymNonStop”