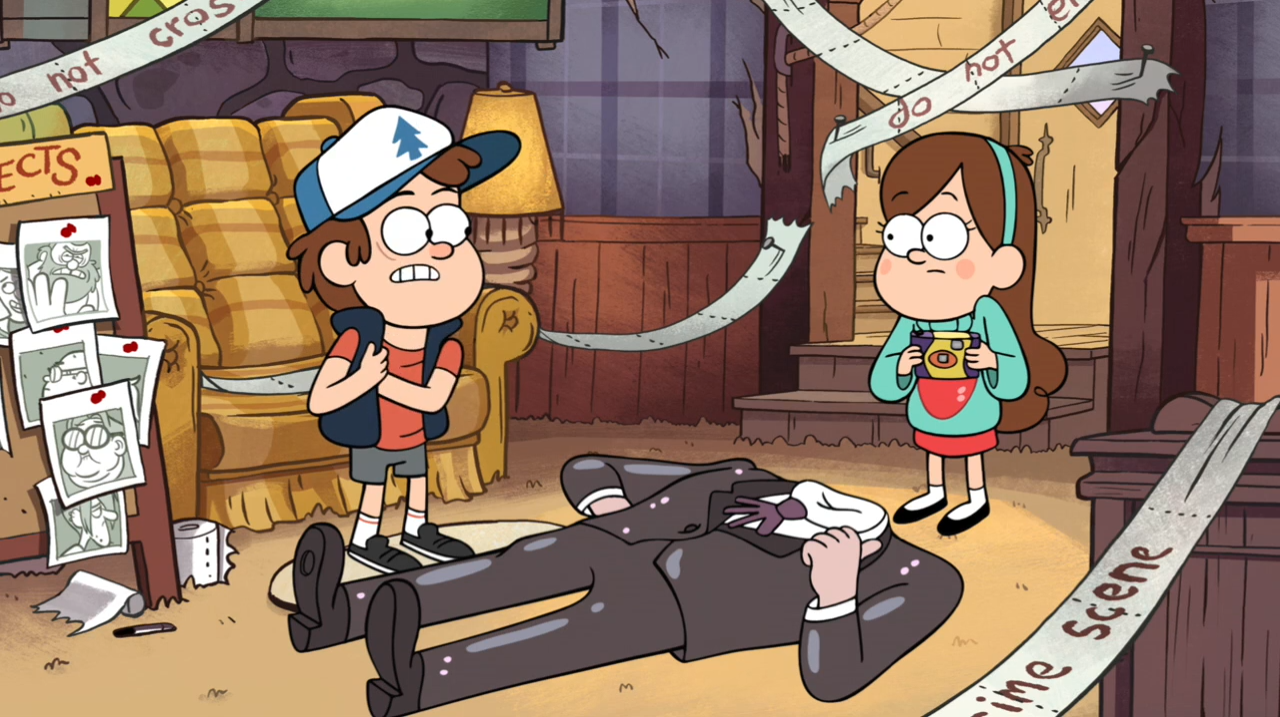 So, now that the show has worked out some of the kinks in its follow-up to the pilot, it has a chance to play around with some different ideas. Here, we find our characters in an episode that is even more steeped in mystery than the first two, and boasts some of the series’ first forays into actually creepy imagery.

But let’s not get too far ahead of ourselves. Our episode opens with the twins watching everyone’s favourite crime show, Ducktective.

The kids’ debate about whether Dipper could out-sleuth the Ducktective is interrupted by Soos’ announcement of a great discovery within the shack. Apparently, a roomful of wax figures was hidden away, and Grunkle Stan completely forgot about it (he seems the type).

Following the discovery of a melted Abraham Lincoln figurine, Mabel decides to build a new wax figure to go with the display. After abandoning her first idea…

…she decides to build a wax replica of Grunkle Stan.

After some hard work and a whole lot of glitter, her creation is finally complete and Stan manages to get a bunch of the community out to see the new figures. Mabel, with a line that is almost too nasty for children’s TV, informs the audience that she was able to create the new figure through spending “blood, sweat, tears and other fluids”.

Mabel’s creation is pretty lifelike, but is not very well received by the audience. Turns out, Stan promised some non-existent free pizza to anyone who attended, much to “free pizza”-shirt guy’s disappointment.

Stan executes a hasty escape with the cash and the angry attendees are left to trash the place before trudging off.

Later that evening, Stan continues his overly loving treatment of his doppelganger and leaves it alone for a minute to grab a snack. When he returns, he makes a horrifying discovery. The wax figure has been beheaded.

Trying to find some justice, our heroes inform the police of the crime, but Sheriff Blubs and Deputy Durland, after no inspection at all, inform the family that the crime is unsolvable. These two side characters, even though they eventually become almost a facsimile of Lenny and Carl from The Simpsons, are two of my favourite minor characters. Their mixture of police incompetence combined with a friendship and love that knows no bounds cannot be played up for enough laughs.

Dipper then decides to make good on his Ducktective challenge from earlier by taking the case into his own hands. The local cops are unconvinced that an adorable boy could solve this crime.

After finding a footprint with a hole in it and a concealed axe, Mabel and Dipper deduce that they can use these clues to discover which angry audience member did the deed. The two twins set out the next day after some words of encouragement from their grunkle.

The two kids start out looking for lumberjack Manly Dan, who frequents a bar in town. After using some cleverly made IDs to get inside,

they come across Manly Dan, who tells them that the axe couldn’t have been his because it’s a left handed axe. Now, Mabel and Dipper haven’t found the culprit, but now all they need to do is find out which audience member is left-handed.

Using a series of clever ploys and disguises, the two kids investigate around town to determine which suspect is left-handed.

After a day of investigating, Mabel and Dipper are “left” with their answer and go to “hand” him over to the police (I already apologized earlier, so you’re just gonna have to deal with that one). But even that option turns up a dead end seeing as local reporter Toby Determined (wasn’t me this time!) has video evidence of a night spent being creepy. 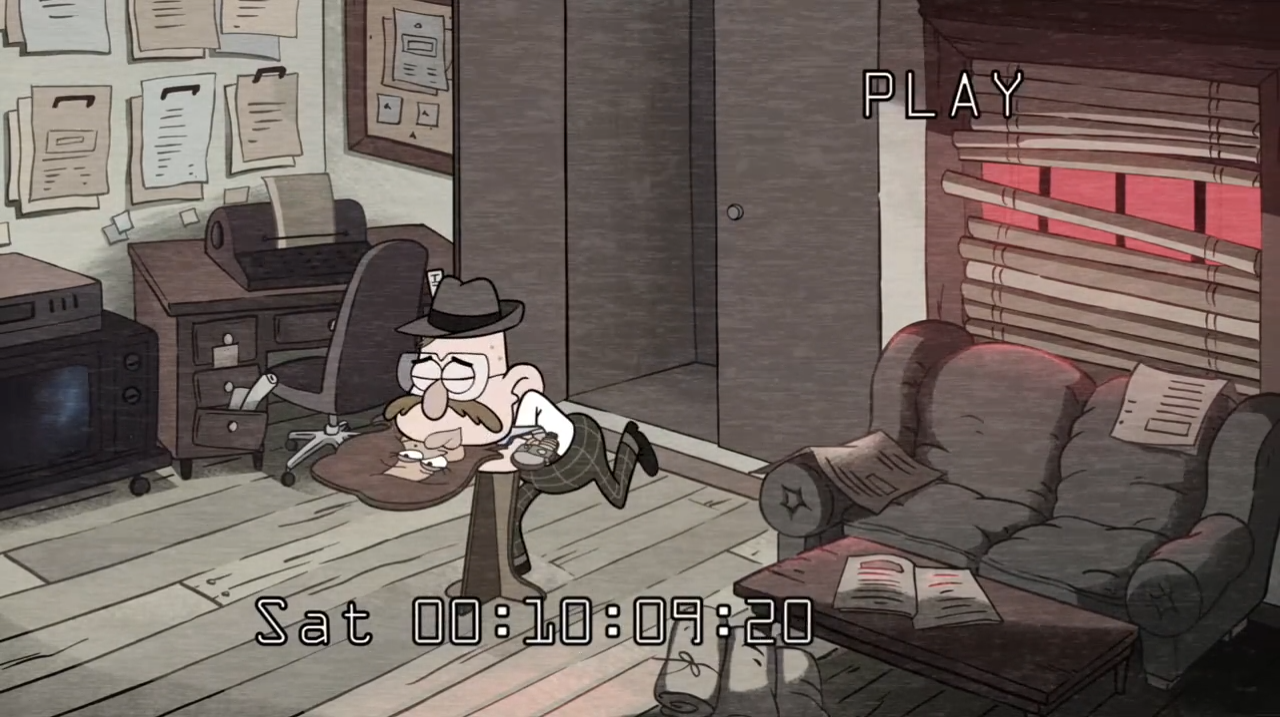 With all leads spent, Mabel and Dipper return defeated to attend the funeral that Grunkle Stan is throwing for his dummy.

C’mon Soos, pull it together. The dummies are staring.

After the funeral, Dipper happens to notice that Stan’s wax figure has a hole in its shoe. Mabel tells him that all the figures have it so they can be placed on stands. This results in the stunning realization that the crime must have been committed by one of the creepy dummies. Instantly, the dummies all come to life to protect themselves. Admitting that they had originally sought to exact revenge on the real Stan for locking them away for years, the assortment of living figures now plan to liquidate the entire family so they can regain their freedom. These figures include wax Larry King, wax Coolio and wax Sherlock Holmes, played by John Oliver (now that’s a strange mix of guest stars).

Our two heroes are vastly outmanned, but manage to gain the upper hand when they realize that the dummies are susceptible to heat. Fighting their way through the crowd, Dipper and Mabel eventually eliminate all the homicidal caricatures until only Holmes is left. Proving that he’s a bit headier than the rest, Holmes manages to sword fight Dipper into a corner. But Dipper, finally fulfilling his promise of being smarter than an inspector, has tricked Holmes into being outside when the sun comes up.

With the mystery solved and the villains all defeated and melted down, Dipper can get some satisfaction from gloating about cracking the case to the authorities. After, of course, Blubs starts taking a looooong slow sip from his piping hot coffee.

And there’s our third episode of the season. Not the laugh-a-line fest that Gobblewonker was, but it still pulls together some pretty good gags. The introduction of Blubs and Derland is enough to make this one pretty memorable. Also, some of the imagery shows that Gravity Falls is already beginning to push the boundaries of what they can get away with. Not one of my favourites, but a solid entry nonetheless.

Now quickly, the continuity and secrets:

-to continue building up for his appearance, Blendin Blandin is seen once again
-also, Robbie makes his first appearance in the crowd before the introduction of his character
-Mabel must have held onto a camera from last episode because she uses the same kind of disposable to photograph the crime scene

To cap this all off, I leave you with the conclusion to the pun-filled crime program Ducktective (like Dipper said, the only reason he’s so good at finding clues is because he’s so close to the ground).