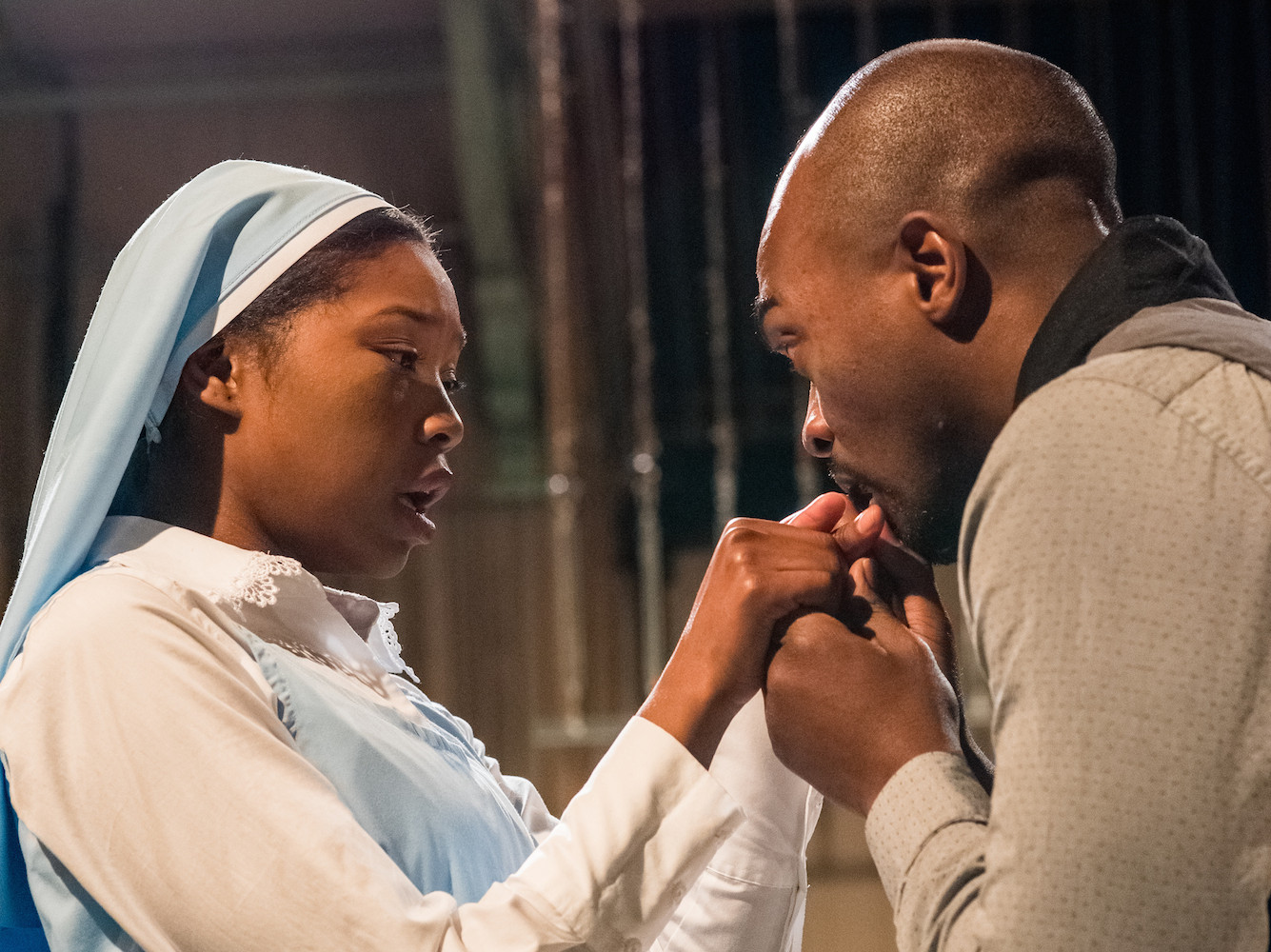 Boston University is loaded with student-run theater groups, and while attending BU I became familiar with plenty of them. I’ve also seen theater productions at Boston College, MIT, Wellesley, Emerson, Harvard, etc. I need not enumerate the number of community theatre groups in and around Boston that I have patronized, and even acted with. Among such groups, Shakespeare reigns supreme. I’ve seen so many Hamlet’s, plenty of Macbeth’s, many Midsummer’s, Much Ado’s, Romeo and Juliet’s, Othello’s and King Lear’s. Titus Andronicus and Love’s Labour’s Lost are becoming quite popular among amateur and fringe endeavors, and even The Winter’s Tale is getting some action (two local productions in the past eight months, unless there were others I wasn’t aware of).

But I’ve always been surprised at how students and community thespians alike avoid Measure for Measure like the plague.

Sure, it’s a “problem play”: it’s neither comedy nor tragedy nor romance, and its dramatic action stems directly from certain societal ills, a difficult thing to translate to a contemporary audience. But I don’t see how this explains why one of Shakespeare’s most complex and interesting plays seems relegated to professional theater alone. It also doesn’t explain why Measure for Measure has not had a proper film adaptation since 1979 (I can’t vouch for the contemporary “re-worked” 2006 film set in the British army, or for the 1994 made-for-TV version, having not even heard of either of them til I was writing this piece).

Naturally, I couldn’t miss seeing Actors’ Shakespeare Project’s production, directed by Megan Sandberg-Zakian, staged at the the Multicultural Arts Center in Cambridge. The ASP production seemed to have anticipated the difficulty audiences could experience in connecting with this play. In cutting it down to a swift two-hour production, omitting extensive sections of early modern clown humor and streamlining the main plot around the actions of the duke, ASP successfully staged the suspense and action inherent to Measure for Measure. Unfortunately, this production failed to rise to the virtuosic pitch necessary to make its current relevance unmistakable rather than implied.

Measure for Measure takes place in Vienna, a hotbed of lax laws, corruption, and sexual malaise. The Duke Vincentio (Michael Forden Walker), well aware that he has let his city go to the dogs, decides to skip town and let his trusted deputy Angelo (Maurice Emmanuel Parent) take the reigns. Although Angelo is known for his upright character and apparent immunity to any sort of temptation (someone even asserts he pisses “congealed ice”), he immediately causes trouble: he sentences young Claudio (Jared Michael Brown) to death for getting his fiancée Juliet (Lydia Barnett-Mulligan) pregnant before their wedding vows are fully sanctified, a “crime” plenty of Viennese men had committed without consequence until now.

When Claudio’s friend Lucio (Johnnie McQuarley) urges Claudio’s sister Isabella (Adrianna Mitchell), a novice nun, to plead for her brother’s life, the hot mix of her purity and rhetorical skills arouses Angelo. He demands that she sleep with him, or else allow Claudio’s fate to be sealed. Thankfully, the duke has never actually left town; masquerading as a friar, he arranges for a classic early modern bed trick to take place to catch Angelo, preserve Isabella’s chastity (for now), and save Claudio. This tidy little summary of course skips over all the hitches and snags in the “friar’s” plans, as well as the humorous antics of various Viennese citizens being arrested for bawdy crimes, who promptly protest and argue over the unfairness of their plight and of the legal madness that reigns supreme in Vienna.

The show was wonderfully staged in a two-story ex-courtroom at the arts center, creating a space that served as a traverse stage (scenic design by Megan F. Kinneen). I had the distinct feeling of being a jury member, judging the action and enjoying the freedom the actors had to play the action where they chose, watching them entering and exiting via a number of doors and staircases. The production was set in modern day, and there were plenty of accomplished performances, as well as some excellent ones. Walker offers a very creative take on Duke Vincentio, a character often seen as a “divine puppet master” (as characterized by Walker in one of the matinee post-show discussions). Instead of witnessing a smooth operator always in control, the play opens with a disheveled-looking duke crawling amidst a pile of office detritus (scraps of legal paper, clothes, an empty bottle of Makers Mark, and empty prescription-pill bottles), clearly feeling the effects of withdrawal and the need to withdraw from his leadership role. The improvisatory nature of this duke made the action of the play more dynamic, raising the stakes and even making his final decision to propose to Isabella seem like a spur-of-the-moment impulse rather than a tyrannical choice.

Parent’s Angelo was smugly self-assured yet genial to begin with, making his descent into lust and corruption more compelling than if he were just an all-around jerk. Regarding cross-cast actors, I was pleased to see Sarah Newhouse morph from the tawdry Mistress Overdone to the upright Provost to the gentle, wronged Mariana. But Barnett-Mulligan took home the versatility prize with her chameleon antics. Be it an intern-like servant to Angelo, the streetwise tapster Pompey Bum, the very pregnant Juliet, or the hysterically harmless executioner Abhorson, Barnett-Mulligan convincingly and amusingly morphed into exactly what each scene needed. That being said, I do think the cross-casting was a bit extreme in this show, to the point of being a tad distracting; having just one more actor for some of the smaller roles would have done wonders for greater between-scene seamlessness.

The one problematic performance was Mitchell’s as Isabella. Isabella is a very difficult Shakespearean heroine to play. Although she agrees to plead for Claudio’s release, Isabella’s pleas are weak until they are bolstered by Lucio’s prompting. Although we sympathize with her when she is in the grips of Angelo’s blackmail, we are alarmed at the extent to which Isabella keeps a death grip on her chastity, as evidenced by the strength of her angry backlash against Claudio for daring to put a chance at living ahead of preserving her purity. Isabella needs to be cold and tempestuous, yet virtuous and pious, all at once, and I did not feel that Mitchell captured that complexity of character or emotion.

Isabella’s contradictions reflect the deep contradictions of the play. What are we to make of the slippery relationship between rhetoric and law, and how human action can be excused based on skilled interpretation? Measure for Measure forces us to directly face the ambiguity of our political and legal institutions, built on the disturbing fact that we can persuade ourselves of whatever it is convenient for us to believe in or hold true at any given time. The imperfections inherent in how we apply the law are frightening; I only wish this production had made me feel that fear more viscerally.

The Actors’ Shakespeare Project production of Measure for Measure is playing now through February 1, 2015 at the Multicultural Arts Center in Cambridge.