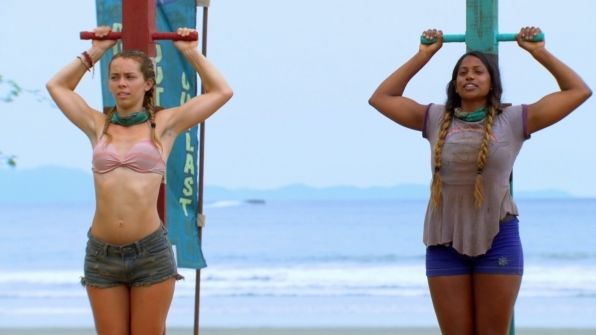 Survivor: Natalie Goes All In

Going into this Wednesday’s finale of Survivor, there’s really only one outcome I want and that’s a win for Natalie.

It’s been a rocky season with the only really “players” voted out immediately following the merge. Early on, Josh was the clear favorite to win and the only person who could seemingly stop him was Jeremy. But then something strange happened: Jaclyn, the quiet floater who really had no game play at all, was reunited with her boyfriend Jon and the two became a semi-powerful couple. I hate to give them any kind of credit as they were playing a very different game than most. In fact, if Survivor is one giant game of Poker, then Jon/Jaclyn duo has been playing War all along. They never used strategy to get by but simply let luck play out as they flip-flopped their way to the final six. But to continue my metaphor, in a game where most people were playing Solitaire, War can seem like a competitive and somewhat interesting game.

Ultimately, Jon/Jaclyn never deserved to win because they weren’t even close to playing poker. So Natalie did what she promised she would do, and managed to turn on the pair and cause a bit of chaos. First, she decided to vote out Alec instead of Keith. Doing so would send a huge red flag out to her alliance that someone messed up. Basically, the plan was to evict Keith since he was winning lots of immunities (good thing he can outplay, because his outwitting is non-existent). Natalie confided in her closest ally Baylor and explained her plan to keep Keith in the hopes that he would beat Jon in the next immunity—or at least outlast Jon. This could have been a really stupid move. Jon and Jaclyn could have sensed the plan and worked with Keith and even Missy to vote out Natalie next. Luckily, this didn’t happen because Natalie has been playing this game from day 1. By that I mean, socially she is dominating. She knew to call out John R. weeks ago in her first real big move. She saw a villain that others would easily hate as well, and it ultimately played a hand in his eviction. That was when I first knew Natalie had some potential and this past week she didn’t disappoint. After volunteering to go to Exile and having an emotional few days, Natalie pulled herself together and defeated Jon in an endurance battle for immunity. It literally came down to just the two of them. Jon was confident as ever and Natalie was eager to take down the number one threat.

After the win, Natalie had two priorities: first was to make sure Keith didn’t say anything at tribal to hint toward a plan and second was to convince Missy that it was time to turn on her alliance. The viewers saw Missy flat out refuse to betray Jon, and Baylor talk a lot of smack to her mom about playing as a team rather than an individual.*Luckily, in the end she was swayed (presumably due to Natalie’s influence) and Jon was blindsided, leaving with his idol. It’s no surprise that I think Natalie deserves to win. She still has an idol which should guarantee her at least final 5 (I can’t remember if she’s allowed to use it for admittance into the final 4 or not). Here are my thoughts on who deserves the win:

5) Keith: If he makes it to the final three, he actually could be a HUGE threat to win. The bitter all-male jury could easily vote for him as “one of them.” I would hope that Jeremy, Josh, and Reid have enough respect for the game to vote for someone who actually knows how to play it. In the card-game metaphor of Survivor Keith is playing hop-scotch (that’s how clueless he is).

4) Missy: She is the culprit behind the no rice scandal earlier this season. She has made a lot of enemies in the jury by helping to vote them out and generally sticking up for her “bratty” daughter. She ALMOST ruined the whole season by refusing to vote out Jon. Other than being a partner for her daughter, Missy hasn’t done much.

3) Jaclyn: While I would actually prefer a Missy or Keith win over a Jaclyn win, she could still redeem herself. As the current underdog, Jaclyn will have to learn how to play the game without her boyfriend. She’s made lots of rash decisions in the past, but the men are all sitting on the jury because of said rash decisions. Other than Natalie, I think Jaclyn has the strongest argument for how she played the game. It would be wise to target her next so she doesn’t sneak into the finals. Granted, I think the jury has no respect for her…mostly because they seem like misogynistic assholes.

2) Baylor: I’ve been saying since the beginning that I kind of like Baylor, and I still am sticking to this evaluation. She aligned herself with the smartest player remaining in the game. Little does Baylor know that the only way to really ensure a win would be if she takes out Natalie. I doubt that she’s smart enough to pull off one last blindside. It seems to me like a final three with her and Missy is almost guaranteed (unless Keith or Jaclyn can win their way to the end).

1) Natalie: As far as I’m concerned, there’s nobody more deserving left in this game. I feel like it’s been a while since I felt so strongly that one and only one person should win. I’m excited for the finale to see what Natalie can do but also terribly nervous that someone will realize she’s a threat and give her the boot. Either way, Natalie is the most deserving of the win. She smartly aligned herself with two couples and chose a pivotal moment to turn on the strongest male left in the game. At this point, Keith owes Natalie his Survivor life. Missy and Baylor had to take a gamble and side with her to advance their game, so I don’t think they will turn on her. Only Jaclyn really has a reason to go after Natalie. At the end of the day, Natalie is the only one playing poker…she may be an intermediate player at best but in a season filled with dummies, she seems like a genius.

* And this is where I’d like to pause and really explain why the Blood vs. Water theme has finally won me over. I was hesitant going into this season, because in all reality the only reason Blood vs. Water worked initially was because it was an excuse to bring back returning players and see them compete as teammates. This season saw all new players coming in so we had to both learn about the players as individuals AND as pairs, which was a bit much. On top of all that, Jeff has been so heavy handed in pointing out all the reasons that Blood vs. Water is so fascinating, when in reality it’s a bit too much. For me, Missy/Baylor and Natalie have finally helped make the blood vs. water concept work and it’s for different reasons. First, we saw Missy’s injury immediately impact her and her daughter’s gameplay. By having an injury that prevents her from competing in most challenges, Missy is now entirely relying on her daughter and their mutual strategizing to protect them both. But even more importantly, Missy and Baylor did not agree on this week’s vote. It seemed blatantly obvious to me, as a viewer, that Missy needed to make a big move and go with Baylor and Natalie, but for a split second I did doubt whether or not she would. I do wish Survivor would have gotten rid of the anticipation and just let us see how Missy/Baylor came to this decision. I suspect Natalie had lots to do with it, but I think the family dynamic would have been more intriguing had we seen the mother-daughter duo really argue it out. Secondly, and more importantly, Natalie has proven the Blood vs. Water theme works by disproving it! In Natalie we have a player who has never been away from her twin for this long. She’s been a duo her entire life and even her reality TV stardom is entirely due to the fact that her and her twin are the same sarcastic/fun person. After week 1 her twin is voted out, and the world (and Natalie) has to get to know her as an individual. So what does she do without her twin and her best friend? She dominates. For me, this season of Survivor isn’t about family, but rather how an individual can have the strength to function and prevail without the crutch of family support. Julie couldn’t do it…she quit. Jeremy was blinded by rage and wanted John R. out for evicting his wife, when in reality John wasn’t responsible for her eviction. Josh’s game was destroyed the second he and his boyfriend were reunited. Natalie had the advantage of playing alone, and I hope she plays her way to $1 million.