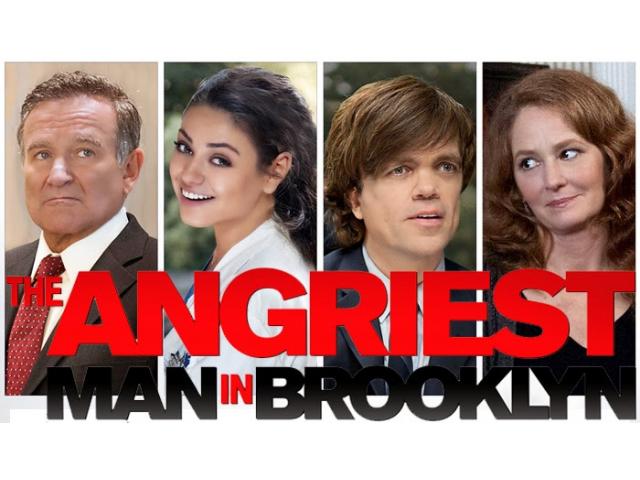 A Requiem for Robin

It’s unbelievable that The Angriest Man in Brooklyn exists- that it was made when it was made by the people who made it. It’s unbelievable that this was one of the last artistic experiences of Robin Williams’ life, portraying Henry, a man plagued by anger who learns to live again as he prepares to die. At one point in this film, Robin Williams jumps off the Brooklyn Bridge. Because of this film, one of the last lines Robin Williams ever said on camera was “on my tombstone it will read 1951-2014”. Its existence is almost eerie, tortured with irony and heartbreaking in the knowledge that even making something this lovely and full of life in the face of death couldn’t help poor Robin.

More than any film before it (yes, even The Dark Knight), The Angriest Man in Brooklyn is inextricable from the death of its star just months after the film’s release. The battle, then, is to see it for what it is beyond that, and I think it’s a pretty special film (if not really a groundbreaking one).

The premise is a little trite (a man is told he has 90 minutes to live by an exasperated doctor trying to get him to shut up) but the execution is wonderful, complete with engaging third-person narration by the lead characters and a superb supporting cast that includes a slightly underused Sutton Foster, Hamish Linklater (I think if we put Hamish Linklater in everything, everything would be better), Melissa Leo and Peter Dinklage (he plays Henry’s brother Aaron with so much quiet sweetness you’d think he’d never even heard of Westeros).

Mila Kunis shares the leading duties with Williams as the miserable doctor who gives the damning and far-fetched diagnosis, giving her best performance in years in a role that requires intelligence, pathos, comedy and, awesomely, no romance to speak of (if we ignore a miserable single-scene dalliance with Louis CK). Williams, it should be noted, is sensational as the pained and desperate Henry, trying to reclaim whatever happiness he can from life before it leaves him.