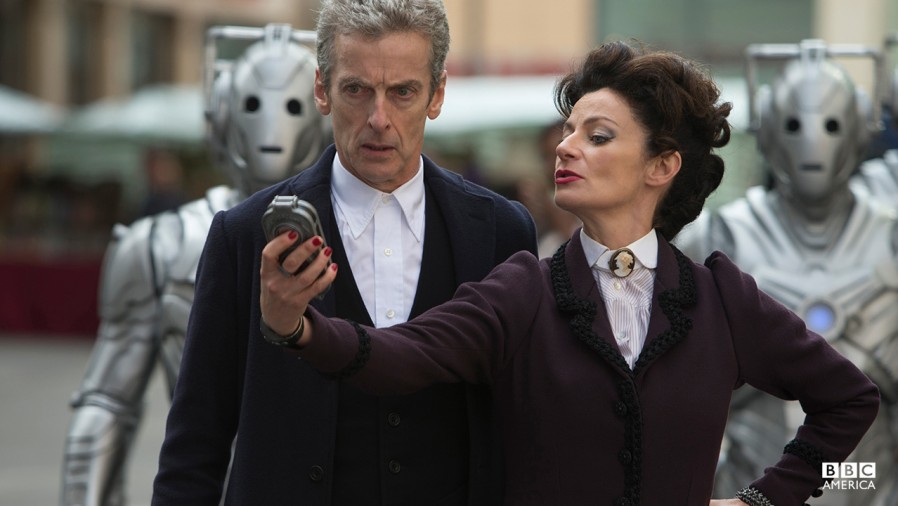 Season Wrap Up: Doctor Who

The Season 8 finale of Doctor Who brought together many of the plot threads it strung throughout the season. It addressed a lot of questions the season posed, but did little to make anyone care about the answers. (Spoilers ahead).

The previous episode ‘Dark Water’ revealed that the Nethersphere teased throughout the season was actually a cloud (the technology kind that later became the weather kind), storing the souls of the recently deceased. The purpose? Creating an army of Cybermen. It’s not really clear why the Cybermen needed souls to exist; Cybermen are wiped of emotions and personality. Wouldn’t corpses to convert into metal androids be enough? The mastermind behind this plot turned out to be ‘Missy’, the latest incarnation of the Doctor’s archnemesis, the Master. One of the biggest problems with the finale was Missy’s plan was so incredibly convoluted and felt complicated for the sake of being complicated. At first it seemed she wanted to rule the world, but she revealed she created a Cyberman army so she could give it as a gift to the Doctor.

Which is the next problem: Missy herself. Before the show announced Peter Capaldi would be the next Doctor, there was a very vocal minority that was hoping the Doctor would regenerate as a female. After all, when a Time Lord regenerates, he changes every cell in his body, so why not have him emerge a Time Lady? So while the Doctor will probably remain male for the foreseeable future, it was a bold move of the show to make one of his greatest enemies regenerate as a woman. The last actor to play the Master was the wonderful John Simm, whose manic, tortured Master was the perfect foil to David Tennant’s Tenth Doctor. Missy doesn’t play well off of the Twelfth Doctor, and so it makes her character fall flat. It’s like the writers took Simm’s insanity and smushed it together with what the show thinks is required of a Strong Female Character. Namely a) being sassy and b) having a flirtatious/potentially romantic relationship with a male protagonist. It’s incredibly annoying to have almost every recurring female character on the show flirt with the Doctor. Missy’s motivations of wanting to connect with the Doctor could be very valid, but throwing in the flirtatious and romantic angle felt like it cheapened a historically complex relationship.

The way Missy was written out felt very abrupt when she was shot by a Cyberman. It felt like such a quick end for such a big character. It’s probably not the last the audience has seen of Missy/the Master, but it still lacked the weight you would expect. It did contribute towards the show’s rather inconsistent attitude towards death. The Doctor and Clara uncovered Missy’s plan when they were trying to find the afterlife in order to bring back Clara’s boyfriend, Danny. Death was presented as something unbearably awful. And yet, Missy was blasted to bits, a lot of secondary characters were killed without a second thought. Missy even killed her assistant in a moment that seemed like it was trying to be a joke. There are a lot of different attitudes towards death, but in an episode about death, treating it with such gravitas one moment, then with such flippancy the next makes it hard to understand the stakes, which makes it hard to get invested.

While it was hard to get invested in the episode as a whole, it was also hard to get invested in Danny’s storyline. Danny and the Doctor never clicked, and that made Danny a roadblock in Clara and the Doctor’s friendship. Danny was always presented as something of an obstacle. He had a lot of promise, and I always felt he was likable enough, but was waiting for him to get a chance to take charge and shine. So while his death was sad, it lacked the emotional punch the writers seemed to be aiming for and that was necessary to make the episode work.

That could sum up the season as a whole. It has a lot of interesting ideas, but it doesn’t invest the time and effort into making the audience care. So when it’s time for these ideas to come to fruition, they don’t quite live up to their potential. The episode (and show) would benefit from choosing less things to focus on. Towards the end of the episode, the location of Gallifrey, the Doctor’s lost home planet was mentioned again. The show hasn’t focused on that subplot all season, so when it was suddenly brought up, it took a moment to not only remember the significance but to feel the significance. Filling the episode (and season) with too many complicated subplots diminishes what could otherwise be a very strong story. Doctor Who is very fortunate to have Peter Capaldi and Jenna Coleman starring, because even if there is a disconnect with the plot, Capaldi and Coleman are capable enough and charismatic enough to reel the audience back in. If Season 9 can combine the narrative potential of Season 8 with an equally strong cast, it will be in great shape.