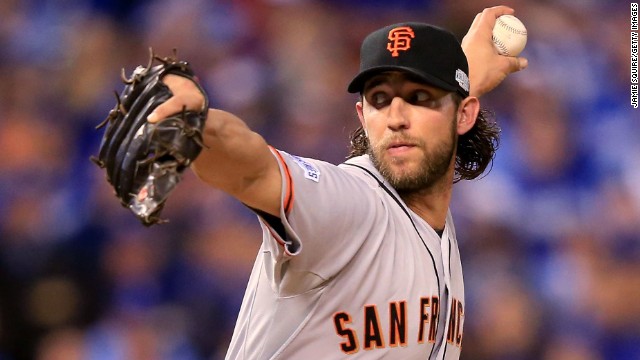 The World Series came and went. It was a championship game that pitted a dynasty against an underdog. The Giants vs. the Royals. The World Series was a matchup of two Wild Card teams, where only one would be the receiver of the rings. This year, the San Francisco Giants came up on top, defeating Kansas City 3-2 in Game 7. The series ended with a finale that had fans screaming on their feet, as the Giants brought yet another one home. October 29th marked the 8th time that San Francisco would win the World Series title, 3 in the past 5 years. The World Series not only showed the dynamics of an experienced team, but also the San Francisco powerhouses that lay in the roster.

Madison Bumgarner might not yet be a household name, but after his World Series performance, he is on his way to becoming one. ‘Mad Bum’ is the 25 year old Giant who not only would become the World Series MVP but would also pitch 5 shutout innings, hoisting the Giants up 3-2 within reach of the title. Yet, Bumgarner wasn’t always the titillating success story, pitching an era of 2.98 in the regular season and he struggled to deliver during key games. While having won two games in the 2010 and 2012 World Series, he fought to gain focus and was caught up in the excitement that surrounded the pitch. Overpowering was his game and he threw every pitch without his usual . The Giants ended up losing the division, only to gain back the ground they had lost in the Wild Card game against Pittsburgh. Bumgarner came back, rested and focused. He became known for his calm yet precise pitches, throws that would lead him into becoming arguably the best pitcher of October. The start of the World Series brought a new variable into the question of whether the Giants would take another one home; whether or not they could lose the Royals. Kansas City shadowed San Francisco every game, where one would step, the other would follow. Giants 1-0. Royals 1-1. Giants 2-1. This continued for 6 games, one would gain ground and the other would take it back. The 7th game, a 3-3 tie breaker led to a momentous breakthrough. Bumgarner would become known as the staple that led to a Giants win.

Mad Bum would go 18-10 for the Giants, an era of 1.03 in the playoffs. He would walk off the field with a brand new Chevy truck, Jockey underwear being modelled after him and a signature post game celebration pose (which involved him pouring bottles of beer into his mouth). He had 52 ⅔ innings, a record in itself, and is being argued as the best pitcher in World Series history. So Madison Bumgarner might not have been a name you knew. #40 on the Giants roster might not have been a number to remember. The World Series might have just been another attempt in an otherwise successful yet average career. However, it wasn’t. Mad Bum changed the course of his history as he pitched a series worth remembering. San Francisco played some great baseball in October, marking their legacy in the chalk ridden dirt. The players fought for their win, working as a team, enforcing the image of a dynasty. And as for the 25 year old pitcher? Well, he pitched his way to a legacy.