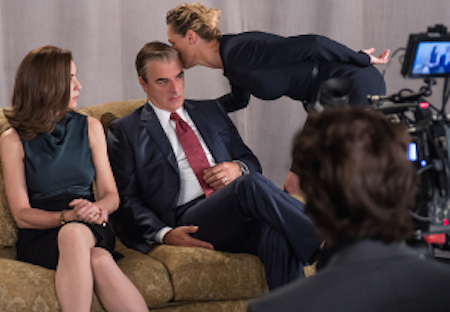 The Good Wife: The Politics of Politics

As Alicia is working to build an ad that will show who she is and the experience that she that qualifies her for States Attorney, she gets a visit from Frank Prady. David Hyde Pierce is becoming one of my favorite recurring guest stars on this show.

Prady approaches Alicia with a Pandora’s Box of negativity, the ammo he and his team could use against her, but he does not want to run a negative campaign. Prady wants to make a pact with Alicia that neither will go negative. Alicia is a person of integrity, and typically values straight forward type persona.

Alicia is also tempted by what’s in the box. I can practically hear Brad Pitt screaming at her “What’s in the box?” Like any normal human being she opens the box and there are pictures of her with Finn Polmar, but most devastating are the photos of her husband Peter with his new attorney Ramona in some not so delicate positions.

Like with any campaign, there is a need to create the perfect ad with both angles. Frank’s supporters leak a negative Alicia add, and thus Alicia’s people leak a negative add about Frank. I like the way this show explores politics. It’s also interesting to see the way this affects Alicia. I would like to see of Diane’s perception, she was has been oddly background this season. I would also like to see more of Peter.

The Ramona of it All

I called this was one as soon as Ramona showed up on the scene. It always seemed like Peter went for the trampy or easy women, but Ramona is everything he wants in a “good wife.”

Peter and Alicia have been separated for a while. I would like to see a fall out happen. I know this would probably impact Alicia’s run for States Attorney, but I think it’s time for these two to move on. I would also like to see this helps evolve her character.

Many are complaining about the Cary story, but I think it’s great and Mat Czuchry has sold every moment. In this installment, the FBI has found a tape of Lamond Bishop putting out a hit on Cary. Is Cary in jeopardy? Was that bodyguard’s word slip a hint that he works for Bishop?

Next week looks like this story may come to a head, with a plea offered to Cary. Will he take a plea? I would like to see this story have a surprising end. The Kings are King and Queen of this, and I have faith they will take this story to a great place.