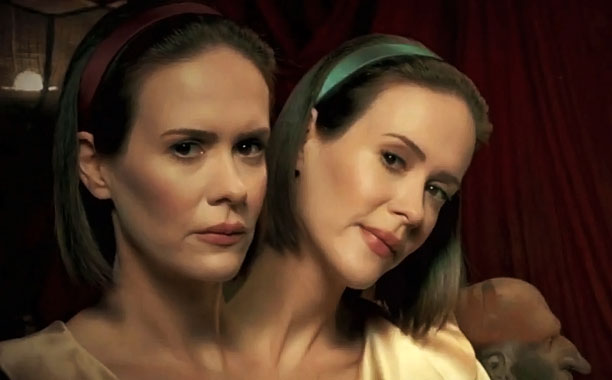 American Horror Story continues to be one of my favorite hours of television. Even the terrible Coven season offered more entertainment value than most hour-long dramas, and it certainly continued to offer the best acting on television. The concept of Freak Show got me really excited. For starters, the press leading up to the premiere released photos of the freaks and showed the return of Kathy Bates, Angela Bassett, and Sarah Paulson, among others. Most importantly, Sarah Paulson gets to play two characters this year in her role as Siamese twins Bette and Dot. I’ve always been a little perplexed as to why Jessica Lange gets all of the acting accolades for these mini-series. Don’t get me wrong because she is wonderful, but Paulson is hands down the best, most transformative actress in the bunch (why did her portrayal of Lana Winter not garnish more rewards?!?). Lange basically plays the same character each season, and she does it well, but it gets old.

Four episodes in and I’d say this season of AHS is good but not great. It certainly beats Coven but it’s nowhere near as good as the original or Asylum. It’s still early so hopefully that can change, but my biggest issue is that there seems to be a hero missing. Vivien and Violet were the heroines of Season 1, Lana Winters and Kit Walker were the heroes in Asylum, and Coven actually had a lot of characters you could root for (Cordelia, Zoe, Myrtle, Misty). Freak Show is really lacking any heroes. All the freaks are kind of bad people. Most of them have already helped to chop up the body of a detective, who let’s be honest, wasn’t actually deserving the brutality. In fact, the cop was trying to arrest Bette and Dot for a murder that they did commit. Even Bette, who isn’t responsible for the actual killing of her mother, is not a very likeable character since she hates her sister and basically wants her dead. The closest I can come to a character to route for is Ethel but she’s got a nasty drinking problem and seems a bit too self-destructive. I get that the show is trying to make Jimmy into the hero role but I don’t entirely buy that. He’s ultimately responsible for killing the detective, and he seems like a ticking time bomb.

What’s also interesting about Freak Show is that the villains are almost more interesting than anyone else. Twisty was a brilliant clown who was both terrifying and extremely entertaining to watch, but (SPOILER ALERT) he died way too soon. That being said, the momma’s boy Dandy seems to be picking up where Twisty left off and may end up being the real villain this season. There’s something about Dandy that I really love and part of me hopes he does a 360 and ends up being a good guy. It helps that Frances Conroy is perfectly cast as his doting mother. The two make for some great scenes.

My other issue with AHS: Freak Show is that there are too many cast members. It took three episodes to introduce everyone and having all the leads share screen time means less time to fully develop these characters. I’m hoping Dandy goes on a killing spree and we get to see more and more of the characters I love (Bette and Dot, Jimmy, Ethel). More than anything though I want Freak Show to kill off Elsa. I have nothing against Elsa but I think her death could really liven up the show a bit. It would give the freaks even more of a reason to band together and it would send the message that AHS can be a great show without Lange. Let the others shine and show to the audience that nobody is safe from the killer clowns.