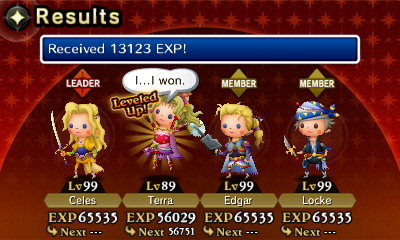 [Note: I have no experience with the iOS port of the original Theatrhythm: Final Fantasy, and cannot personally speak to changes in the game first implemented in that port.]

Square-Enix’s Final Fantasy series has produced some of the best music in video games, a fact which they capitalized on (as well as the 25th anniversary of the series) in 2012’s Theatrhythm: Final Fantasy for the 3DS. Billed as a “rhythm-RPG,” the original Theatrhythm featured tapping and sliding the stylus to the beat as your party of characters traveled and battled through different songs. It covered the first 13 main numbered Final Fantasy titles, and over 70 songs, in the vanilla game. I personally put about 150 hours into it, in just under two years of ownership.

Theatrhythm Final Fantasy: Curtain Call, also for the 3DS, has taken everything that was good about the first game and made it bigger and better — twice as many characters, three times as many songs, and many more useable items and collectables. The RPG aspects have been deepened, allowing the independent boosting of stats (using the Collectacard items that were pretty purely cosmetic in the original) and the ability to reset a character’s level back to 1. The somewhat-random Chaos Shrine has been expanded into Quest Medley mode: instead of a two-stage chain picked from a limited pool of songs, a Quest provides a branching pathway with anywhere from 10 to 85 stages and all music pulled from the general library of the game, including any DLC downloaded. There’s also a Versus mode to go head-to-head against other players for the best score, complete with abilities that mess up your competitor’s display.

This time around, you’re no longer limited to the touchscreen interface, either. In addition to regular stylus tap’n’swipe, there are three additional control schemes that the game will recognize: regular button input, a one-handed button input, and a hybrid button/touchscreen input. Although I haven’t used the button input on anything more difficult than the easiest scores, it seems to me that not having to fumble the stylus around would be a great advantage on, say, crowded public transport. Menus are also navigable by buttons rather than the touchscreen.

Possibly my favorite thing about Curtain Call compared to its predecessor is the way it has streamlined the core experience. The post-stage experience/acquisitions recaps have been sped up considerably, so there are fewer delays and unskippable bits between songs. Demos (seeing the stage played perfectly by the computer) are available from song selection and not merely the post-song menu. Downloaded songs are integrated into the by-game listing rather than being segregated. In the tracks themselves, different note types retain their distinctive colors even during special sequences. Best of all, quests are easy to pause, so you can leave one suspended in-progress while you go play a different game, or even just play versus mode.

Perhaps the only drawback is just how enormous the game is. Series mode from the original — which sent the player through the three songs representing a single game title — has been dropped, leaving the player to pick through individual songs virtually unguided. The sheer number of things to play through (220+ songs), unlock (60+ characters), or collect (80+ items, 150+ cards in three rarities; all random drops), is overwhelming almost to the point of debilitation for lack of direction within the game itself.

However, that is really only a minor quibble. Theatrhythm Final Fantasy: Curtain Call is wholly a joyous shot of nostalgia that is easily enjoyed a song at a time or in hours of questing.   If you’ve ever loved Final Fantasy, or video game music, I would highly recommend it.

PS – Curtain Call also contains all the song content of the original (minus one DLC track from a game that isn’t released yet), so don’t worry about purchasing the first one if you haven’t already.