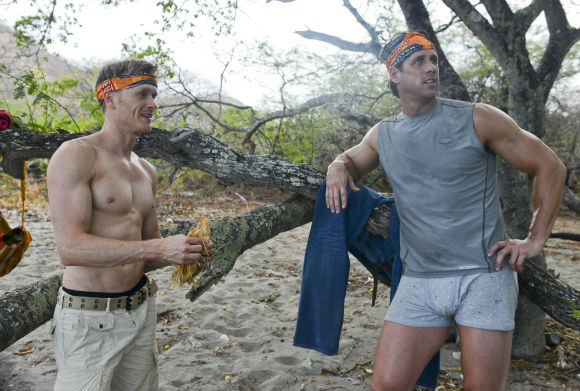 Last week, I made the comparison of John Rocker and his girlfriend Julie to Monica and Brad Culpepper, and this week John made that comparison look really smart. Thanks John.

Wednesday night’s episode of Survivor once again started with Baylor being a bit angry about the votes. She was under the impression that Val was the main target, yet she was chosen as the back-up choice in case Val had the idol. This is the second week in a row that Baylor received surprise nominations, and she was rightfully upset. As I watched the first few minutes unwind, I thought to myself, “It’s too bad Baylor is in a tribe with an all-male alliance because she could probably shine as a good player if given the chance.” But it was quickly made clear that Baylor or Jaclyn would be voted out next….or so it seemed.

As the episode continues, we finally get to see some smart strategic moves from people who aren’t only named Josh. Wes, finally winning a competition for his tribe, sent father Keith to Exile Island along with his ally Josh. This is the first time this season that I thought this decision was made strategically. Wes likes Josh, Josh is smart, and sending Josh to spend time with Keith would plant seeds for a possible future alliance. Good move Wes. Over at Exile, Keith suggested he and Josh share the immunity clue which was another good decision (again, gaining trust with Josh). That’s when the two realized that the idols were back at camp and Jeremy or John Rocker could have them.

Meanwhile back at Hanahpu, Jeremy is fuming because John Rocker betrayed him and he holds John 100% responsible for the demise of Val. What Jeremy and his tribemates don’t realize, is that John actually did try but he’s too idiotic to play this game correctly and his fellow tribemates (but, let’s be honest really just Josh) figured him out. So Jeremy decides to expose John for saying racist and “homosexual” things. I’m quoting here…not homophobic…homosexual…So I’m picturing John Rocker mid-sports interview saying “I love penis”. Sorry Jeremy, use your words correctly. But I digress.

The exposure of John’s true identify led to Julie crying and feeling as though her games was ruined. In addition, it led to one of the biggest fights post-immunity challenge. After Hanahpu wins (again), Natalie and John get into a verbal fight which leads Natalie to share his wicked past, and leads John to say more dumb things like: if you were a boy I’d punch your teeth out. This is why I hate John, and this is why I love Natalie. I knew having the “twinies” on Survivor would be awesome after watching their Amazing Race seasons. These are girls who aren’t afraid to speak their mind and be rude when needed, but they are the rare bread in that their rudeness is really just them saying what we all want to say. Part of me really hopes that Natalie’s verbal attack of John was strategy, but the other part doesn’t care because John annoys me and I’m glad she put a dark cloud on his game.

As Coyopa debates who to send packing, Josh has the idea of turning on John. He knows John has the idol and that John will never use it to protect Josh, so why not get rid of him now? So Josh convinces Baylor, Alec, and Wes to oust John and his plan played out at tribal council. Now, the all-boys alliance seems to be divided and my best guess is Dale’s days could be numbered.

Additional note: I both love and hate having a tribe perform so terribly on this show. I love it because the audience gets to know certain players really well and I love an underdog story. I hate it because you never get the really know the other tribe. I still couldn’t name half the members of Hanahpu without looking them up. I’m 100% routing for Josh at this point, but I really have no one to compare him with over at Hanahpu since they haven’t needed to strategize yet. I’m hoping for a tribe shake up soon so we can have a bit more screen time for everyone.