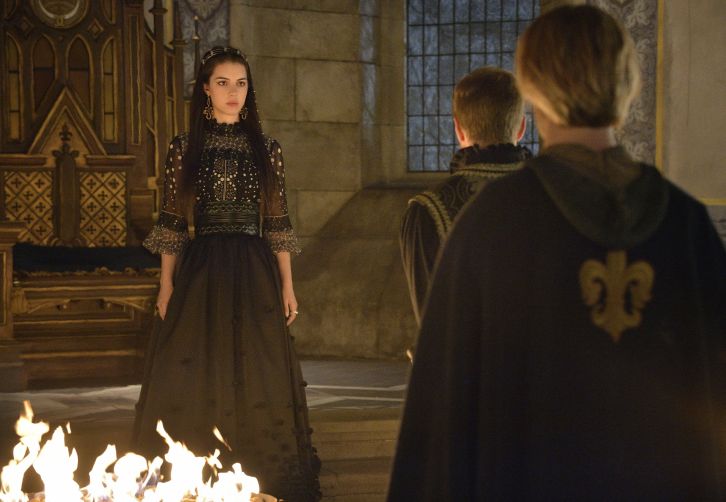 I have to admit Reign is my biggest guilty pleasure. I absolutely love this show. I don’t care at all about historical accuracy. There’s just enough CW drama and romance to keep me hooked, but there are also some really strong characters in the show. And the first season had some great plot twists. It’s just a really enjoyable show. Honestly, the CW knows what it’s doing.

The second season premiere of Reign, titled “The Plague,” was, obviously about the affects of the Plague coming in and taking over. Of course it was a really scary time and incited a lot of panic. Mary was left in charge after Francis went after Lola and his baby. And she had a tough choice ahead of her. With people in court quickly getting infected, a nobleman decided to use this as his advantage. He demanded that Mary let him quietly kill his enemy or he won’t provide the food they need. After a lot of back and forth and death and drama Mary poisoned Catherine to make her think she had the Plague and killed that nobleman. She did what she thought was right saying that every life mattered. But will she and Francis change as time goes on?

Kenna and Bash, meanwhile, both almost got the Plague separately. Kenna was looking for Pascal, who ended up getting sick and dying and Kenna got locked in with him. Luckily Bash found her. At the same time, Grier found out about Leith’s new relationship and convinced him to leave her because she didn’t want to be tortured by having to see him all the time and be in-laws. Then, coincidentally, Yvette died while waiting for him.

Finally, Francis found Lola and his son. There was a lot of back and forth and suspension while Francis had to decide what to do with his son. In the end he decided that he couldn’t let his kid and Lola go, which was not what Lola wanted. So it’s going to be really interesting to see Mary’s reaction when they all come back together. It looks like this season of Reign is going to be just as crazy and dramatic as the last one, and I can’t wait.