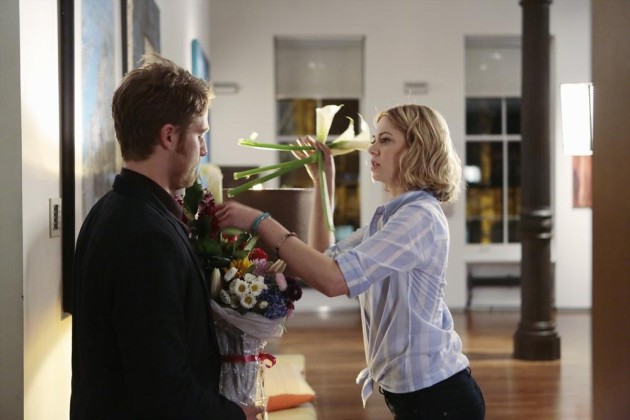 I’m going to be honest. I didn’t particularly like Manhattan Love Story. I didn’t find the characters to be relatable or even likable really. They all felt pretty simplistic, but maybe the show just needs to grow into itself some more. I’m not so sure though. A lot about the pilot episode and the characters’ inner thoughts felt very stereotypical.

Manhattan Love Story is about a girl named Dana and a guy named Peter. Dana just moved to New York to start her dream job in publishing, and she does not get a warm welcome. People have been getting fired and everyone thinks that she’s after their job, so they’re complete jerks to her. They don’t show her around or give her work and then play a prank on her where she gets stuck in the stairs. She calls it the worst day in her life. It sucked but I’m not sure it was worst-day-worthy. Maybe that’s just me.

Dana then goes on a date her with her friend’s husband’s brother and that doesn’t go well for poor Dana either. She just ended the worst day in her life and now the guy is checking out her chest while pretending to listen to her and making fun of her list of cute things she wants to do in the city. Peter, on the other hand, thinks that Dana’s beneath him and kind of crazy. She then randomly starts crying and hiccupping and leaves.

Dana’s friend forces Peter to apologize. Dana accepts until she realizes he didn’t mean it. Finally Peter realizes that he’s a cynical, sarcastic guy and comes back to really apologize to Dana. He takes her on an epic date to cross off some of the things on her list and he realizes that she was right all along. By the end of the season they’ll be in love and will make each other better people I guess.

I’m don’t have much hope for this show There were a couple of moments that I laughed, but overall I thought it was pretty predictable. I also didn’t find the characters very likeable and could have done without the inner monologues. Maybe it’ll get better as it goes along… if it goes along.