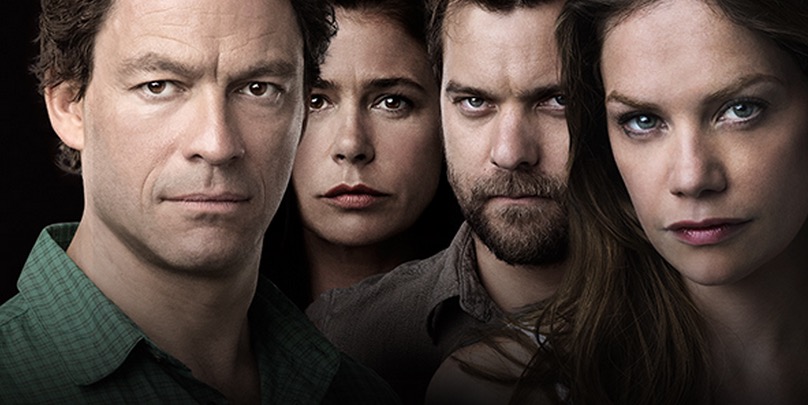 Showtime’s new drama The Affair is compellingly elusive. At the end of the first hour, not only do we not know why the principal characters are being interrogated, we don’t know where we are, when we are, and, despite having seen the same flashback action play out twice over the course of one episode, we have no idea what happened. We don’t know who the good guys are, nor the bad guys; you get the feeling that The Affair is too sophisticated to make such distinctions.

Like most great Showtime series, The Affair is well-paced and unpretentiously engaging enough to completely eliminate what so many prestige cable shows inspire- the feeling that watching is like a chore- though it still manages to capture the best essence of a prestige cable show: moral complexity, intellectual intrigue, a looming sense of atmosphere.

The captivating pilot episode begins with a red herring- family man and budding novelist Noah Solloway (Dominic West) at the pool with a young woman whose romantic advances are far from subtle. Noah all but brushes her off completely, finding his way home to his sleeping wife Helen (the superb Maura Tierney) and four rowdy children (including Bunheads standout Julia Goldani Telles as icy teenager Whitney and Jake Richard Siciliano as the dangerously careless eldest son). As the family finds their way to grandpa’s fancy estate in the Hamptons (not without horrific incident), we get to know Noah; or at least we think we do.

Later in the episode, our perspective shifts and we see the same day as recounted by a waitress named Alison Bailey (Ruth Wilson). She awakes in bed next to Josh Jackson but is nevertheless miserable. As Alison sleepwalks through her day, we learn that today would be her son’s birthday, had he not died in 2012 at the age of 4. Her husband Cole (Jackson) is slowly moving on, refusing to give up on her doing the same, and Alison hates herself for resenting him for that. As we watch her push her husband away and struggle with mounting depression, we get to know Alison; or at least we think we do.

At some point in this miserable, rotten day, Noah’s family comes into Alison’s diner and his youngest daughter begins to choke while Alison is taking their order. The girl recovers and Alison rushes to the bathroom to settle her nerves where she has a brief encounter with Noah. They meet again late that night, on a beach, and Noah walks Alison home. He’s inspects her outdoor shower and apparently leaves. Alison takes a shower. Cole returns home, exchanges harsh words with Alison, and they proceed to have rough sex against their car as Noah watches from the edge of the driveway. These are the facts of the case and- as they appear in both characters’ versions- they are undisputed.

Pretty much everything else, however, is disputed.

We see Noah’s perspective first. Here we see Whitney ordering egg whites instead of haggling over espresso like in Alison’s version. According to him, it’s Noah who saves his youngest daughter’s life and he’s checking on his son when he runs into Alison outside the bathroom. According to her, Alison’s the one who saves Stacey and Noah comes looking for her in the bathroom to thank her. In Noah’s version, Alison’s skirt is a little bit shorter (the camera lingering on her legs a bit too long) and he returns to leave her a tip, which Alison doesn’t seem to recall. When he sees her on the beach, she makes a joke saying “you found me” but in her recollection, it’s him who says that. Her version of the story adds a frumpy sweater around her revealing sundress and a strong self-deprecating streak in Noah as he calls himself neurotic and antisocial. It goes without saying that they disagree on whose idea it was for Noah to walk Alison home. He recalls sincerity in her invitation to try out the outdoor shower while she recalls awkward irony. The timing of Alison’s undressing for her shower is also in scandalous dispute. The last thing we see through Noah’s eyes is a the mysterious, imposing man verbally abusing then raping Alison. By the time we get to the same scene in Alison’s version, we know that man to be her husband Cole; we know the circumstances, understand their argument, and hear her consent to the sex (particular props to Jackson who turns a traumatizing character introduction around and makes a remarkable argument for Cole’s humanity mere moments later).

Wilson and West play most of their scenes twice, with the tiniest of nuances separating the two accounts as they frame themselves and each other in forebodingly skewed ways. West is particularly brilliant, finding some sort of character-defining consistency between the two portraits of Noah and tweaking them ever so slightly to unsettling effect. We see Noah as one might see a real person- in broad strokes defined mostly by his circumstances (family man; teacher) and without the benefit of TV-viewer omniscience when it comes to his true character. Is he harmless and bored or anxious and predatory? One man’s hero is always another man’s villain so it’s very possible that he’s both.

Is this a story about perspective and the intractability of human memory or are these characters purposefully mis-remembering, setting their side of the story up to save themselves or destroy each other? As more circumstances around the interrogation are revealed, we may gain enough perspective on the characters and their present circumstances to begin to excavate the truth from these two fictions but, as TV viewers, we’re accustomed to a God-like view of any story. With narrators as unreliable as these, it’s clear that omniscient clarity is never something The Affair will give us, but murky, perspective-skewed ambiguity is a lot more interesting.