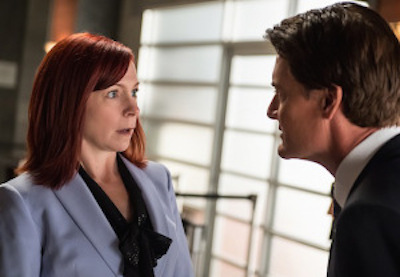 The Good Wife: The Return of Elsbeth Tascione

After a week off from re-capping- sorry, Aruba was calling my name- I am back and so is Carrie Preston, who plays Elsbeth Tascione, a fan favorite guest star on The Good Wife.

The Return of Elsbeth Tascione

The case of the week involved Alicia and Dean (Taye Diggs) took on Elsbeth Tascione and her law partner Rayna Hecht (Jill Hennessy) on a lawsuit involving sexism.

While Preston was her usual charming self, the case was a bit of a snooze this week, thankfully she added some levity, although the things she saw in her head were weird. J-Serve (the company) was eventually served with a federal indictment from Josh Perotti (Kyle MacLachlan) a long time admirer of Tascione. Fans rejoice the federal indictment will bring Preston back next week, let’s just hope the case spices up a bit.

The law firm was hit with a case of cyber terrorism this week, caused by Diane clicking on an e-mail she thought was from Alicia.

The big reveal we found out through this piece of the story is that Diane owns the space, formerly known as Lockheart/Gardener. After a leaking ceiling, a cockroach in a drawer, Diane has had it, and the firm may move to her old stomping ground.

Kalinda Sharma and her Juggling Act

Kalinda is tasked to find to cyber terrorist, and this pushes her back into the world of her former FBI female fling/love interest.

At the beginning of the episode Kalinda is sexing Cary, and then throughout the rest of the episode she is sleeping with the FBI agent. Kalinda’s sexuality has always been an unspoken fluid topic in the show (one of the only CBS shows to cover this). In a heartbreaking moment when Kalinda is asked if she has come out to her family, you can see why Panjabi was the first person to win an Emmy for this show. On the heels of discovering that she is leaving the show at the end of this season, I am excited to see how this is explored more this season.

On another note has Chris Noth not learned anything from his characters? This past week Noth made some terrible comments calling Carrie Bradhsaw a slut, and Mr. Big misunderstood. This past week he and Alicia got into a screaming match over Finn endorsing Alicia. At the end he was cut down yet again by Alicia. Noth continues to be part of shows that celebrate women. In the end Peter shows up to endorse Alicia, which was a nice moment for her, but has Noth learned nothing from these women and the excellent programs in which they’ve shared the screen?