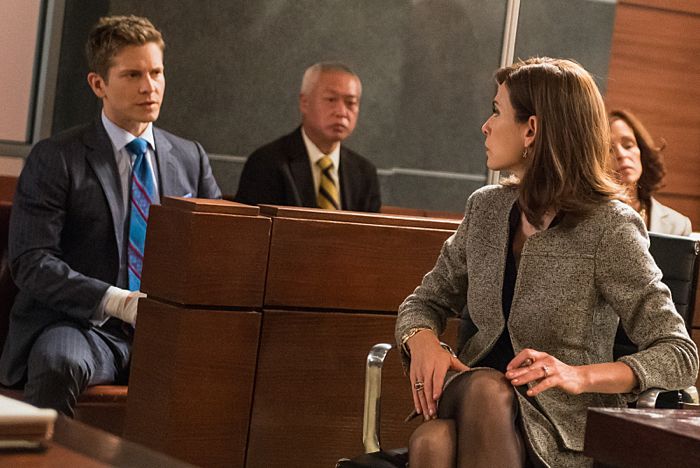 The Good Wife: If I Ran, What’s the Plan?

All throughout the episode Alicia denied she was running for States Attorney, even Gloria Steinam, who seemed to turn into her guiding force in her mind could not sway Alicia. Then one last interaction with current States Attorney Castro about Will and she was ready to “go to the mattresses,” Godfather style. Will Alicia run? I’d like to see this show go in that direction.

Everything isn’t as it seems

Joy is tough, non-emotional, and wants “just the facts” like a famous television cop. As each of them is questioned you see the definition of perfect editing on television, do their answers to her questions match what is actually happening? Hell no, but its about the relationship these three have formed and their care for one another.

In the end their answers save Cary from being placed back in jail, because the key witness against him has gone missing. Lavin’s testimony at the end to save Cary, is heart wrenching, and she should be considered as an early front-runner for a Guest Actress Emmy nomination.

God is your Judge and Jury

The case of the week takes Florrick/Agos to a different type of court, Binding-Christian arbitration. Who knew that existed, not this atheist.

Alicia has some great scenes with her daughter Grace speaking about scripture. Alicia has always been a self proclaimed atheist, is this case her conversation with her new associate played by Taye Diggs the awakening she needs to run for office?

This case also highlights Cary trying to balance helping his client, and fighting the good fight for himself. Cary has lost the firm 4 clients, but this client has stayed true to him. There is more of the spiritual connection, and forgiveness is possible.

Last nights episode was fantastic and the interaction between Castro and Alicia sent shivers down my spine:

Alicia: “You have something to say to me?”

Alicia: “[Laughs] I doubt that. Men always have something to say.”

Castro: “No, after I put your partner away for 15 years, then I’ll have something to say.”

Alicia: “If you’re still in office.”

Castro: “[Laughs] So, that’s why you’re running – to get your partner off the hook. Or so you can keep your client, Lemond Bishop, out of jail…” [Alicia walks away.]

Castro: “Or because your lover was gunned down in one of my courts. That’s the rumor anyway. Will Gardner was your lover. you blame me for his death. That’s why you’re running. Retribution.”

Alicia: “Anything else?” [Alicia gets right in Castro’s face.]

Castro: “What do you want?”

Alicia: “No, get it all off your chest.”

Castro: “I have a lot on my chest. I’ll save it for the campaign.”