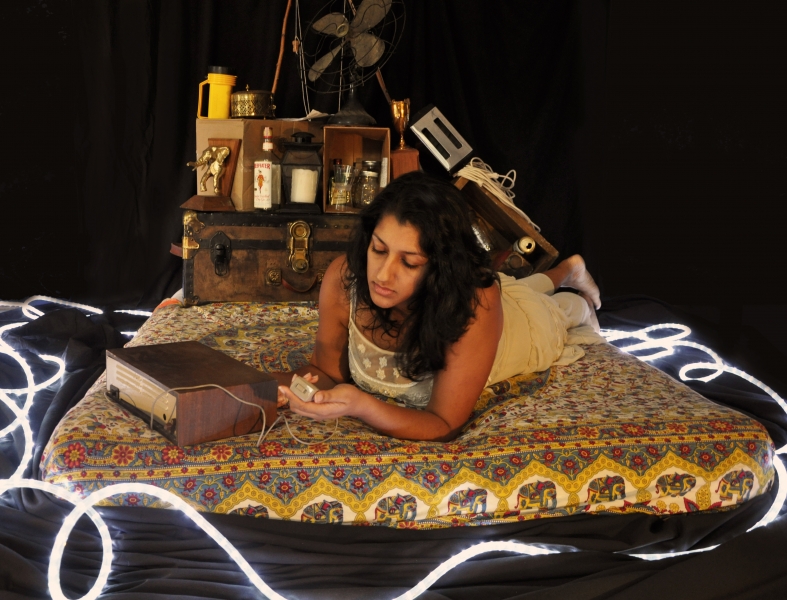 The folks at Company One don’t leave much to chance. When I arrived at the BCA Plaza Theatre, anticipating an interesting but wearisome six hours of theatre on a lovely fall Saturday afternoon, it quickly became apparent that any discomfort or confusion during the press viewing marathon would be minimized. I picked up a small baggie filled with a few candies and a Prime of India teabag, placed my order for mid-viewing samosas (from Mela restaurant, nearby), viewed the small displays featuring Hindu deities in the lobby, and, once seated in the theatre, leafed through a program stuffed with extensive notes on the Displaced Hindu Gods Trilogy, written by Aditi Brennan Kapil.

The trilogy comprises three plays that echo the Hindu trimurti, or trinity of gods, formed by Brahma the creator, Vishnu the preserver, and Shiva the destroyer: Brahman/i: A One-Hijra Stand-up Comedy Show, directed by M. Bevin O’Gara; The Chronicles of Kalki, directed by M. Bevin O’Gara, and Shiv, directed by Summer Williams. Each play stands on its own as a work, but viewing them all in one sitting allows a greater appreciation of Kapil’s ability to weave similar themes, symbols, and voices into one cosmic entity. C1’s daring staging of the trilogy underscores their continued commitment to deeply smart, funny, and damn relevant theater.

The marathon began with Shiv. A thick, worn mattress adorns the stage, upon which lie two trunks. Though we don’t know it when we see it, its purpose soon becomes clear: this is the vehicle upon which the eponymous Shiv (Payal Sharma) travels through space and time over the churning waters of the cosmic ocean. It is also the mattress upon which she sleeps in a one bedroom apartment she shares with her parents in Skokie, Illinois.

What ensues is a fantastical tale of family ties, loyalty, and limitless imagination tested by harsh economic realities, postcolonial resentments, unexpected romances, and cultural disenfranchisement. Shiv has witnessed her father’s failure to translate his considerable gifts as a Punjabi modernist poet into literary success in America. Her bapu (Michael Dwan Singh) has taught her the language of poetry, of science fiction, of imagination, and from this rich foundation she can access the entire universe. But although he gives her a sea-worthy vessel to weather the cosmic ocean, his humiliations and bitterness, his lost opportunities and regrets, anchor Shiv to one address: 27 East Lake Rd.

Shiv is the most undefinable of the three plays, and the most challenging of the three to critique. It lacks the faster pace of the Chronicles and the comedic familiarity of the stand-up routine. The shifts in atmosphere and fluctuations in time are most abrupt here; the text is dense with political commentary often delivered in blocks of monologues. And while the wit is sharpest here (“Colonialism was an act of destruction, there is no denying, but out of this was born modern India! In all her glory!” “She’s still in labor, actually. We expect a birth announcement any decade now.”), some of the performances did not rise to the challenge of the text.

Sharma’s performance as Shiv is sharp and warm, both when she is guiding us through her constructed world, and when we watch her struggle to destroy it for the sake of rebirth. It’s a treat to watch an actor gifted enough to make witnessing exciting; Shiv does a lot of listening, to her father and later to the Professor (Jeffrey Phillips), and she does not slacken her attention for an instant.

Unfortunately, Shiv’s loyalty and fast hold on her father’s memory depends largely on his ability to be riveting to us as well. We need to find him as compelling as Shiv does; otherwise, his long speeches dilute our compassion, and our minds start to wander. I found Singh’s performance as the sweepingly passionate Bapu dipping into the cartoonish, and while his moments of aggression and resentment were powerful, more often than not I felt more repelled than moved.

As I mused over what I saw as Bapu’s lack of magnetism, and wondered how to put it into words, in strolled the professor, the uncle of Shiv’s new friend Gerard (Casey Preston), the man who rejected Bapu’s poetry years ago. In an instant, the play shifted. With a kindly but condescending tone, an air of self-importance and self-absorption that felt all the more chilling for not being too affected, Phillips mesmerized as the figure of the oppressor in a fraction of the time Bapu had to garner our sympathy as the oppressed. Phillips put my nerves on end (in a good way), and his interaction with Sharma is a high point in the play, distinct from the sludgier segments dominated by Singh or Preston.

Soon, it was time to leave this predominantly male world to set sail for the Chronicles of Kalki. In the blink of an eye, the set changed: three jagged, dingy panels continuously dripped water between panes of “glass,” providing the effective illusion of rain seen through three windows. A spare table and metal chairs are all that is needed to help the action of the play alternate between a classroom, a bedroom, a convenience store (echoed from Shiv), and an interrogation room. Two girls (Stephanie Recio and Pearl Shin), their friendship strained under the devastating denigration inherent to any high school experience, find their dismal existence shaken by the arrival of Kalki (Ally Dawson), the final avatar of the god Vishnu. The line between reality and fantasy is blurred, grounded only by the presence of a kind cop (Brandon Green) who struggles to piece together exactly who Kalki is, and what ruckus has she left behind her.

Kalki is brimming with references to the Ramayana, to comic book culture, to the “high school hate machine,” and these three women bring it to life. Dawson dazzles with other-worldly badassery, great dance moves, and what I considered the funniest line in the entire trilogy (it’s about a parasol…you have to hear it yourself). Recio and Shin convincingly capture distinct teen attitudes without succumbing to hair-twirling or gum-smacking stereotypes. While I found Recio touching in her skin-crawling discomfort and yearning to be accepted, I was really captured by Shin; her every small gesture (nervous finger-tapping on a table, sullen arm-crossing, sensual awe at Kalki’s touch) felt right, vibrant and humorous.

If my energy was waning as I entered the “Displaced Lounge” (the BCA Black Box) for Brahman/i: A One-Hijra Stand-Up Comedy Show, I forgot it as soon as Aila Peck took the stage, armed with her trusty bass-playing sidekick (Preston). The gender-fluid Brahman/i, donning what I suspect was Girl 1’s hat from Kalki, proceeded to entertain and elucidate Indian culture and history for just under two hours while guests enjoyed drinks and finished off their samosas. Peck, taking periodic sips from a carafe of water, as any good creator-god would to keep up her life force (do you see the trend? Oceans, lakes, rain, drinking water?), made great use of her vocal gifts, treating us to an assortment of accents (“You people are suckers for accents! I could recite the damn phone book up in here”). Her sense of comedic timing was exquisite as she irreverently barreled through views on high school, imperialism, and Indian erotic art (the highlight of the show, for me).

Granted, after the first hour, and several clever and amusing jabs, the piece did start to feel one-note, or perhaps two-note (gender, British imperialism, gender, British imperialism). And some of the jokes fell shorter in wit than others did (e.g. conflating the prehistoric creators of Stonehenge, most likely slaughtered by some other invading barbarian force, with the pompous sustainers of the British Raj struck me as just a wee bit juvenile). But Peck is never dull, and the stand-up routine provides yet another way to use humor and performance to unpack Kapil’s seemingly endless creative and intelligent source material.

The Displaced Hindu Gods Trilogy, biting and brilliant as it is, would never have gotten off the ground without the marvelous staging I witnessed in all three productions. The spare scenic design of all three productions (Justin and Christopher Swader) allowed for greater dynamism in scene switches, a particularly useful element of Shiv, in which kite lines seamlessly became laundry lines. Costuming (Raissa Bretaña) caught my eye in Kalki, where notes of fringe help connote permanent dampness in the avatar, a subtle touch. The projection images in Brahman/i, and indeed all the dramaturgical materials included in this production, were outstanding (kudos to Jessie Baxter and Ilana Brownstein, resident dramaturgs). But I reserve my highest praise for lights and sound (by Christopher Brusberg and Liz Panneton, respectively). The effective changes in atmosphere, the subtle mood-setters (convenience store music? Of course!), the fantastical, the mundane, all the alternate states of mind were colored and enhanced by the light and sound design.

Whether for one show or for all three, I highly recommend you go see these Displaced Hindu Gods, these underdogs that insert the holy into the everyday, these manifestations of a bright mind put into the hands of fearless and creative thespians and stagehands.

The Company One production of The Displaced Hindu Gods Trilogy is playing now through November 22, 2014 at the Boston Center for the Arts, Plaza Theatres.