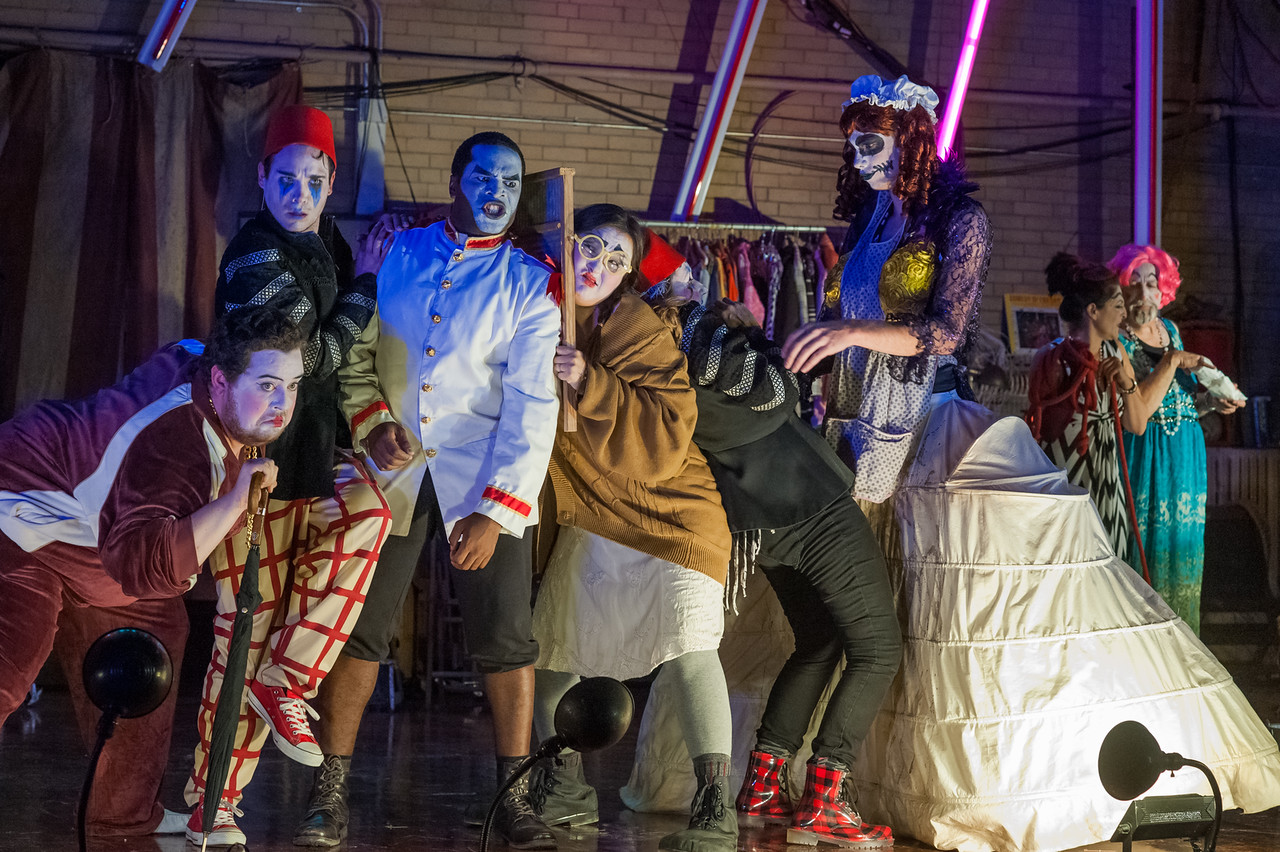 Don’t screw around with Shakespeare…unless you can make it hella-entertaining.

This was the thought that pulsed in my mind as I watched the Actors’ Shakespeare Project’s production of Comedy of Errors, directed by David R. Gammons. I was both excited and apprehensive about this show due to my own shifting views on one of Shakespeare’s earliest plays, and on the director at the helm of it. Until last spring, I was one of many folks all-too-ready to dismiss this early farce. Recent re-examination of the text made me reconsider what I had assumed was nothing but a Scooby Doo-like romp through rebooted ancient Roman humor. Whether ASP would confirm or shake this new opinion was an open question.

I was also very excited about seeing another show directed by Gammons. His direction of Boston College Theatre Department’s production of Chekov’s Three Sisters last year was astonishing and fantastic, full stop.

But as I sat in the Brighton High School auditorium, observing a proscenium stage crammed with gewgaws (hula-hoops, tarnished mannequins, a piano, racks and racks of costumes, all flooding an impressive set designed by Gammons himself), my confidence faltered. A crudely printed sheet declared we were about to witness a production put on by “Snoo & Snee, the Amazing Siamese Twins and their Traveling Siyd [sic] Show Sircus [sic].” What kind of ridiculous modernized staging had I walked into?

Carnies rushed to and fro, faces thickly daubed with black and white makeup, decked in garish plaid, gaudy lace, hoopskirts, tracksuits, fezzes, and dowdy round spectacles (costume design by Gail Astrid Buckley). Multiply the kitsch to the nth degree with single-spot lamp lights and bright neon tubes shining Bombay Sapphire blue, Gatorade green, and bubblegum pink (lighting design by Jeff Adelberg). This truly was a circus, and the show was about to begin: a two hour, uninterrupted presentation of Comedy of Errors.

The plot is madcap. Unexplained antagonism separates the lands of Syracuse and Ephesus; Egeon (Richard Snee), a Syracusan, caught in Ephesus during his search for his son Antipholus (Jesse Hinson) and the son’s servant Dromio (Susan S. McGinnis), has one day to pay a thousand-mark fine or lose his life at the hands of the sympathetic yet law-abiding Duke Solinus (Sarah Newhouse). Little does Egeon know that his son is about to be successful in his quest to find his and Dromio’s long-lost identical twin brothers…also named Antipholus (Omar Robinson) and Dromio (Eddie Shields), respectively (because that makes sense). Mistaken identities, angry wives, unpaid debts to the Mafia, and an attempted exorcism are only a few of the hijinks that ensue.

ASP’s show is oodles of fun. It is also one of those productions that particularly inspire me to praise all the members of the crew as well as the performers. It takes a lot of talent and craftiness to convincingly portray near-anarchy and spontaneity onstage, to make the illusion of ongoing playing-within-a-play complete (kudos to stage manager L. Arkansas Light, and production manager Deb Sullivan). Eerie carnival music pervades and complements the unearthly effects made by the fun-house set, lights, and costumes (sound design by David Wilson). The performances are acrobatic, involving plenty of slapstick physical comedy as well as whirling and wheeling and purposefully unconvincing stage combat (excellent violence design by Ted Hewlett). The actors are often juggling a variety of ridiculous props while capering about, among them a ridiculously long chain, a violin that doubles as a Tommy gun, and a wash board that serves as a very “sturdy” door (properties design by Nina Alexander).

The production weaved in and out of Shakespeare’s text, with occasional meta-interruptions by the “director” Cameron M. Cronin, even while he was playing various Ephesian townsfolk. This re-imagining of Comedy of Errors had plenty of references to the trials of putting on a play: any actor could identify with these carnies calling for lines, forgetting their blocking, and wildly missing their fight cues and targets. It made for some fine theatre. The two Dromios, in particular, were a delight to watch. The exchange between McGinnis’s Dromio and Hinson’s Antipholus, during a particularly famous moment in the text, comparing the kitchen wench Nell’s (Ryan O’Connor) features with various geographical locations, was hilariously seasoned with a convincing rolodex of accents (vocal coaching by Melissa Baroni-Healey). Other high points: Paige Clark, as the knock-kneed carnie scapegoat “Melissa Bigfoot,” in her various roles; Omar Robinson’s wonderful booming voice as Antipholus of Ephesus; and the Siamese twins themselves, a joined-at-the-hip Richard Snee and Sarah Newhouse. I’ve been a fan girl of Newhouse since watching her play Macduff in an all-female Macbeth back in 2007. She doesn’t disappoint as an amusing Adriana, the violently jealous wife of Antipholus of Ephesus. The fact that she is “attached” to her sister Luciana (Snee), who draws the romantic attention of Antipholus of Syracuse (Hinson), makes for an even more acute dose of silliness.

Other changes to the text added a different flavor of silly. What to make of the modern references peppered into this production? Forrest Gump and Say Anything are just two cultural nods I identified during the night. The crusty reactionary in me raised its hackles…at first. Don’t screw around with Shakespeare…especially when it comes to the text. I have long resisted the notion that loosely adhering to one of Shakespeare’s plots while flooding a new work (play, film, book, whatever) with modern characters, circumstances, and language can be called an adaptation. Ten Things I Hate About You (a great film) is inspired by Shakespeare, not an adaptation of his work. When you lose the language, all you have is an inspiration; Shakespeare is found in his words, in his highest poetry and his basest, lousiest doggerel. You can count on one hand how many original plots he wrote, and to have the story without the language is not enough.

But this show was a real adaptation. As the audience roared with each reference it caught, the crusty reactionary in me fell silent, and with good reason. We can cast a production with all men in Jacobean drag, can approximate period accents and authentic minimalist sets, and we would be no closer to experiencing Shakespeare as the Jacobeans experienced his plays. Catching contemporary sources of wit while also being skillfully guided through early modern English by these crazy carnies may actually be the closest I have ever come to identifying with those Jacobean viewers over four hundred years ago. An amazing feat.

One reservation to be made is whether this staging, with all its meta-interruptions and modern references, may prove too confusing a cacophony for someone unfamiliar with the original plot. And yet, perhaps this question is moot. While I enjoyed seeing how Shakespeare could be mangled and molded without losing its essence, like a Stretch Armstrong doll that remains recognizable in any distortion, a newcomer to the play is gaining access to a text less performed and more misunderstood than others in the canon, enjoying themselves all the while. No harm, no foul.

ASP not only made Shakespeare “hella-entertaining”; this production was completely successful in exploring the dark underside of the cheery play, in doling out wit and menace in equal measure.

The Actors’ Shakespeare Project production of Comedy of Errors, directed by David R. Gammons, is playing now through October 19, 2014 at Brighton High School