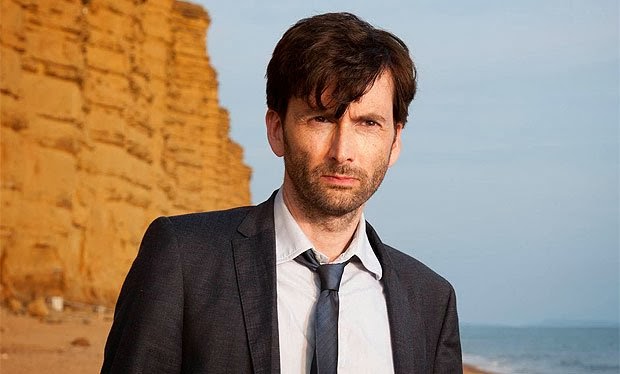 Talking to The Doctor: David Tennant on Gracepoint

It’s my turn to do an instalment of Talking to Fox! This time we were lucky enough to join in on a conference call with David Tennant, star of Doctor Who, Broadchurch, and many beloved Shakespeare productions. His upcoming mystery mini-series Gracepoint will premiere on FOX October 2nd at 9pm ET/PT. Tennant play Detective Emmett Carver who has just arrived in the town of Gracepoint to investigate the death of a young boy named Danny. Many of the interviewers were quite excited to talk to their favorite Doctor so the topics were varied between his work on dramatic television, Doctor Who, and stage work. Gracepoint is the American remake of Broadchurch although David assured us that the show is a standalone remake and the characters are definitely different people. After a moment of getting accustomed to his accent, I was delighted to hear what he had to say about the show. He was so gracious and sweet to all the interviewers, and genuinely seemed to be having a good time.

Here are the highlights:

“On one level, it’s a whodunit and the sort of spine of that is something that I think is familiar to us from many TV shows and movies of the past. [Then] there’s the procedural element of cops trying to solve a case.

I think it’s very hard to watch the first episode without your heart breaking for the family, actually. That’s helped by the fact that they’re played by Michael Pena and Virginia Kull, who both really take you on this harrowing, awful journey of two parents who lose a child. That, in itself, is about one of the worst things that human beings can imagine.

It doesn’t shy away from really showing you what the true repercussions of that will be. That really follows through the whole series. It’s very honest. It’s very candid, and yet at the same time, it’s a thriller as well. It kind of grabs you and takes you on this journey, which is a bewildering and thrilling and gruelling and gruesome, and yet, at the same time, I think impossible to turn off. I think it’s a compelling story. I think it’s been brilliantly told. I’m just very pleased to be a part of it.”

On the differences between Gracepoint and Broadchurch

“I think Hardy and Carver are very different, actually. They certainly feel very different in my bones. Obviously, they look quite similar. They are following the trail of an investigation which has many similarities, but they feel different to me. It’s probably for others to make a list of quite how obvious those differences might be. That’s not really my principal concern. I just want to tell this fantastic story as truthfully and as honestly as I can, I suppose.”

Reporter: Obviously, like you said, there’s some differences. When you’re playing Carver, does it tend to at all though bleed into Hardy? Do you ever get confused or do they get mixed up?

“I was worried that might be the case. There’d been quite a long gap between Broadchurch Season 1 and then shooting Gracepoint. There’d been about 18 months. Then I came straight off the end of Gracepoint into the start of shooting Broadchurch two, which is what I’m doing right now. That was literally a 24-hour turnaround, and I headed into the read through lousy with jetlag. I thought this could be tricky. I don’t want to be slipping into the wrong accent. I think, bar calling one of the families by the wrong name once, I don’t think there’s been any other time where I’ve got confused between the two.”

On working with Anna Gunn

“I was nervous, of course, turning up on day one to meet Anna, because we had so much to do together, that that relationship was so important to get right.

It was a huge relief and then a great joy to work with her throughout the ten episodes. Everyone who knows her work knows how talented she is. I was very chuffed to get to play alongside and also get to know her offset as well. She’s a lovely lady and someone that I feel greatly enriched to know.”

On working in the US instead of the UK

“It’s kind of the same job all over the world really; it kind of works in the same way. Actors are a very similar breed, whichever country you go to.

Craft service, that’s a difference. We don’t have that in Britain. There’s more snacks on a US TV show. That, I would say, is the biggest difference.”

Reporter: You’re doing an American accent on this version of the show.

Reporter: Executive producer Carolyn Bernstein praised as impeccable. I know that some critics have been more critical, saying you sort of sound like Batman at times, so –

David: Well, there’s nothing wrong with that, is there?

Reporter: It was great talking to you, and since it was brought up earlier, you would make a fantastic Batman, just so you know.

David: Joel, I appreciate that. I believe the part’s taken, but I’ll keep that in mind and I’ll say that we’ve got your recommendation for the future.

On whether he prefers theatre or television

“I’m quite greedy for the variety, I suppose. I like the fact that I get to flip between them all. That’s something that I would sort of work quite hard to preserve my ability to do that, I suppose. There are advantages and frustrations with each, I guess. In theatre, you get to tell a story many times, over a number of months, and you get to investigate every possible corner of what that story might be.

I guess if you’re filming something, whether it’s film or television, it’s all about chasing that one moment and getting it in the can to make it live just that one time. They’re both related but very different techniques. I enjoy trying to master both of them really. I think they are quite different jobs, but the experience of working the theatre I think informs working on film and television and vice versa. I feel very fortunate that I get to dabble in all these different genres. Hopefully, that’s something I’ll be able to continue to do.”

“Because I started in the theatre, that still sort of feels like the day job to me, and any kind of filming, it still fills like a bit of a sabbatical, even though I probably do a lot more of that now than I do on stage. I guess that’s in my bones, that’s how I sort of approach things.”