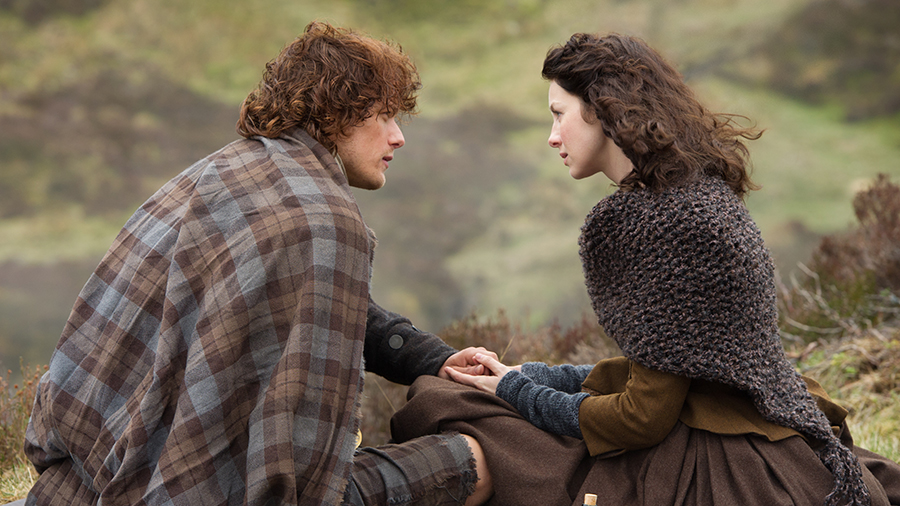 April is a really, really long way away from now. And unfortunately, that’s when Outlander will return after it’s action-packed mid-season finale. If you haven’t been watching this addictive show, you have several months to catch up. Also if you haven’t watched, stop reading this, because there are spoilers. Just watch the show instead.

The episode split more time between the 18th and 20th centuries than most of the previous ones. And this episode also spent the most time with Frank since the pilot. It’s easy to get swept up with Claire and Jamie’s romance and the intrigue and danger their world presents, so it’s important to remind the audience of what Claire is missing. Up until now, the show has featured flashbacks of Claire and Frank when they were together. This was the first time the audience saw how Claire’s disappearance affects Frank. Poor Frank isn’t doing well at all, being seemingly depressed and emotionally volatile. He’s miserable without his wife, which heightens how important it is that Claire get back to him.

Claire was a little distracted from her mission to get home, what with marrying Jamie so she could be a Scottish citizen and get legal protection against Frank’s evil ancestor. But this week, she saw a chance to get back to Craigh Na Dun, the rock circle that transported her back to the 1700s in the first place. Obviously Claire wasn’t going to get back home, not yet, but cutting between both her and Frank running to Craigh Na Dun trying to find each other was just mean. Claire ditched her Scottish friends, only to be captured by the British right before she could touch the stones, and taken to…Frank’s evil ancestor. The man is like a cockroach- he makes your skin crawl, he’s just awful, but it’s impossible to get rid of him. If there were some kind of nuclear fallout and every other life form was dead, somehow, Black Jack Randall would survive and continue to ruin everything.

The episode ended on a rather rude cliffhanger, with Black Jack terrorizing Claire, and Jamie coming to her rescue. While I’m sure Jamie will get Claire out, who knows at what cost to the rest of the clan. Not to mention it’ll be slightly awkward between them, since Claire was captured while trying to run away from Jamie. And we have to wait several months (only you know, like seven) to see how it all plays out. It’s a shame, since the story was really picking up pace.

For people who have been following the show, there’s plenty of time to rewatch the first half of the season and drool over the gorgeous scenery and costumes and fall in love with the characters again. For newbies, that’s seven months to fall in love for the first time.