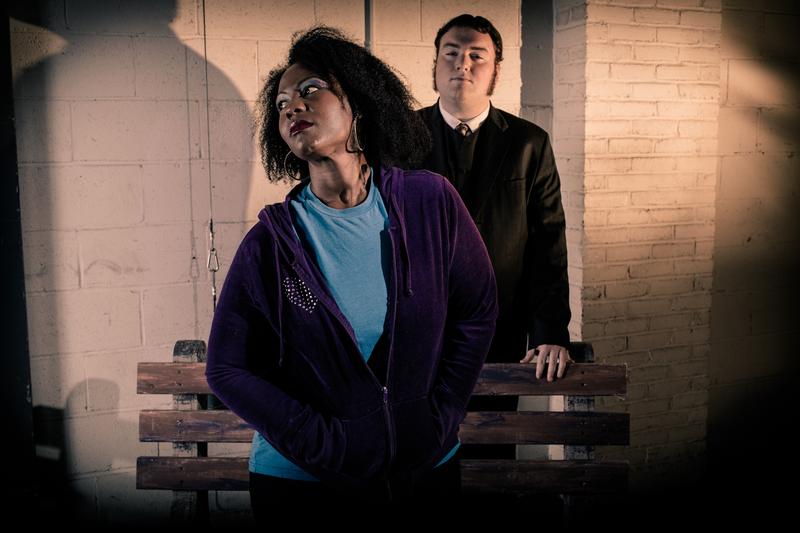 One day, as a teenager, I was about to read a copy of Pygmalion and my father said to me, “Why do you want to read Pygmalion? Isn’t it just My Fair Lady?” That question struck me as odd at the time, but I’ve come to realize that there’s something of a consensus among American theatergoers that the musical version of Pygmalion has replaced and rendered irrelevant the original play. It makes me cringe to hear people leaving Flat Earth Theatre’s production of the play and complain that Shaw’s work isn’t as good as My Fair Lady. Delightful as that musical is, it doesn’t replicate the fascinating psychological complexity and insightful, layered portrayal of class in the underperformed original. And I wish Flat Earth had done the original. Because they haven’t. They’ve created a dystopian, contemporary adaptation of Shaw that makes no sense.

The 1914 version of the play by George Bernard Shaw riffs on the Classical legend of Pygmalion, the artist who falls in love with his sculpture of a beautiful woman before she becomes animate. Shaw’s play reimagines the eponymous artist as Henry Higgins, a renowned phonetics professor and dialect coach who transforms lower-class flower seller Eliza Doolittle into a refined would-be duchess. The play explores their tempestuous albeit flirtatious relationship and the oppressive late Victorian class structure in which they live. Flat Earth’s production, adapted and directed by Devon Jones and unofficially retitled #PygmalionUnderground, retains most of the script but resets the play in a future ruled by a totalitarian empire where the government relegates everyone to wandering the subway while riots ensue above ground.

In theory, the futuristic setting serves to emphasize the societal problems in the play by drawing parallels to contemporary fears of governments spying on everyone and of a general lack of privacy in society. As such, in a radical departure from the original, all of the interior living room scenes now take place out in public subway stations, in a set design by Allison Olivia Choat. Though a few lines change to reflect the new setting, attractively represented with a minimalistic couple of benches against a backdrop map of the London Underground, the setting makes bizarrely little sense. Higgins’s maid is with him in the subway for no reason, Eliza goes off to change as if she’s in a house, and it’s ridiculous for the characters to meet and talk the way they do in the middle of the Underground. Perhaps Jones is thinking that life has become more public and we now discuss freely out in the open business that we once kept in our homes, but the characters in this production all talk and act like they’re in someone’s house even when on a subway bench. Most frustratingly, repetitive train announcements randomly ring throughout the course of the evening to remind us that we’re in the Underground, during which the actors frequently have to pause their scenes. It’s like intermittent blows with a hammer to the pace of the show.

The modernizing changes to the play feel misplaced and inconsistent. With Cara Chiaramonte’s costume design, poor characters dress in contemporary outfits while upper-class characters wear period Victorian dress. The design heavy-handedly accentuates the play’s class issues and provides a confusing atmosphere in which the play takes place in two eras at once. Text changes exacerbate the time period problem. While much of the script remains unchanged and Higgins refers to outdated material like gramophones and phonographs, characters also talk about getting an espresso and one scene features Eliza repetitively saying the word “fuck.” To adapt Pygmalion to the present day believably, you would have to completely rewrite the script and remove all traces of antiquated speech and language. Throughout the play, an ensemble of extras pantomime contemporary background scenes to create an atmosphere of lower-class pain and torment. Like every element of the contemporary revision, the scenes emerge out of nowhere, having nothing to do with the text and doing nothing to support the drama. Randomly adding a few swears and scenes about class struggles to the background of a play doesn’t make the play more timely, it just causes confusion.

It’s as if the production put all its effort into the reimagined text and setting, leaving the performances unpolished. The cast is universally in good voice, with believable dialects (though the dialects lack the extreme precision demanded by the text, something with which any American company will struggle if there’s no dialect coach). But few of the cast members listen to one another and they deliver line readings more than they connect with each other. Chris Chiampa as Higgins has a ringing voice well suited to the character, but he focuses on the musicality of his speeches more than making a connection with anyone. Frequently, actors pause between lines, partly because of the pacing problems fueled by those train announcements and partly because they look like they’re struggling to remember lines.

J. Deschene as Mrs. Eynsford Hill, an upper-class friend of Higgins’s mother, is an exception to most of the cast, reacting believably to the action of the play and delivering lines with pristine comic timing and wit. Jaclyn Johnson as Eliza Doolittle gives a similarly believable performance, capturing her notoriously challenging character evolution and playing each stage in Eliza’s growth into high society with precise voice and physicality. Her scene with Chiampa at the end of the play is the only one in which characters seriously listen to each other and their elocution turns into compelling dramatic action. But even this last scene struggles to make sense, as a background scene of police officers threatening a couple of homeless people upstages it. And that background scene ironically makes Eliza look snobbish in that she completely ignores the homeless characters.

The whole reimagining is unnecessary. Flat Earth has a noble mission with this show. In the words of Chiampa, they want to “free it from the tyranny of the long shadow of My Fair Lady.” Boston audiences love their classics and cerebral material, so companies ought to perform more of Shaw’s work in town. But there’s a more effective way to bring Pygmalion out the shadow of its musical usurper and appeal to a contemporary Boston audience. And that would be to revive the play Shaw actually wrote.