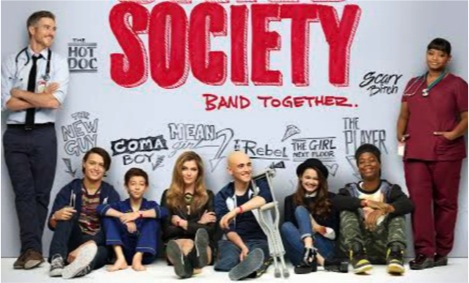 I can picture the meeting in which Red Band Society was greenlit. “There seems to be a lot of buzz around that The Fault In Our Stars thing. Maybe cancer’s hip these days?”

And then, later on in the same meeting, someone found themselves remembering the tone-hopping, vaguely edgy days of early Glee. And then, Red Band Society was born.

The series follows a bunch of hospital inhabitants. Most of the patients are children with varying degrees of illness: eating disorders, heart defects, comas, and the aforementioned cancer. The below advertisement tells you about all your going to learn about the patients from the first episode:

It’s The Breakfast Club meets The Fault In Our Stars, but without the depth of either.

The “Rebel,”Leo Roth, is painted with broad strokes around his bad boy-hood. He and “The Player,”Dash Hoshney, are introduced smoking a joint while skipping class. This is rebel 101. We are told by the voice over that all this rebellion is masking the pain of having been sick for the vast majority of his life. If we didn’t already get that, then the heavy handed Henry V references spell it out. Despite this being the literal text of the first episode, though, I never really felt the pain behind the shenanigans.

The “Mean Girl,”Kara Souders, is painted in similarly dissatisfying broad strokes and touched by heavy handed metaphor. The “girl without a heart”finds out throughout the episode that her heart is in trouble. Cue sad trombones.

All is not lost, however, for the series. In the pilot, the acting is awkward and unconvincing, but I can see these kids growing into their roles.  The pilot isn’t sure how edgy it wants to be versus how much it REALLY wants to pull on your heartstrings, and so the result is a hodgepodge that’s never fully satisfying. If the show can grow into it’s tonal inconsistency, combined with attempts to flesh out its teenaged inhabitants, it can stand a chance.

What the show really needs, however, is to grow some balls. In the pilot, everyone is nice, with the exception of the mean girl, who is nice underneath a transparent veneer. In order for Red Band Society to function as a sick kid dramedy, it needs to lean into how unfair these kids lives are, and accept the VERY REAL stakes they’re facing. The only storyline that affectively finds these in the pilot is that of the Mean Girl, and that’s hampered by the aforementioned over-the-top acting and painfully on the nose analogies. The episode hinges on one of the characters losing his leg, and I never for a minute bought this as anything more than an aesthetic challenge.

A lot of this is due to ensemblitis, which is a thing I just made up. Basically, it’s where a show that will eventually hinge on the strength of its ensemble forgets that a pilot episode requires an emotional throughline: your Jack on Lost, your Finn/Rachel on Glee, your Sarah on Orphan Black. By trying to get me to invest in ALL of its characters, Red Band Society causes me to invest in none of them.

I’ll probably give Red Band Society a few more watches before I call it quits. The cast, in interviews at least, is charming and promising. The story behind the show is similarly heartwarming. And the talent that went into its development is undeniable (hi Stephen Spielberg!). Let’s hope it can shake off the pilot doldrums to emerge a fully functional series.