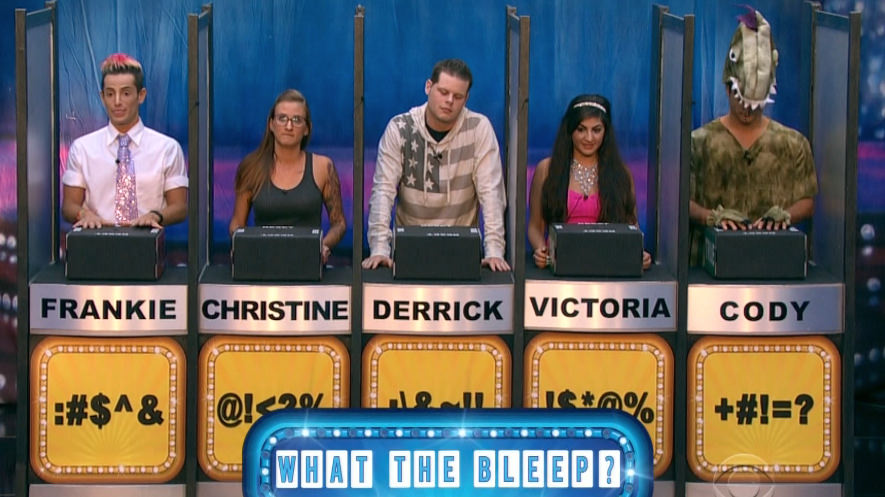 Big Brother: The End is Nigh

Another week of Big Brother draws to a close as the last few weeks of the season approach. I must say that I’m impressed. It’s not often to see a solid alliance make it to all the way to the end and we’ve pretty much seen that with the remaining Bombsquaders (it’s tempting to keep calling them the Detonators, but really that was a group which did not include Caleb). Sure, they got rid of Christine this week, but the Bombsquad was initially an all-boys club and the core group of boys stuck together until now (with the loose canons of Devin and Zack getting the boot).

I was incredibly sad to see Nicole leave this week as she was the only person left who could possibly break up the alliance. That being said, Nicole did return to the house in a somewhat defeated state. She was close to being saved by Derrick but made the silly mistake of praising his gameplay and comparing him to Dan. Nicole was smart to recognize the power of Derrick but dumb to speak it out loud.  So it was no surprise when Thursday’s episode started with the first of two live evictions being Nicole. I must say I loved her speech asking the houseguests to stop playing Big Baby and start playing Big Brother.

Nicole’s complaint echoes mine. This season has really lacked big moves. Even when a big move occurs, like turning on Christine, the entire alliance is on board with it which makes little to no waves in the house. While this might not make for most interesting season to watch, it certainly goes to show how smart the players are. Led by the brilliant influence of Derrick, the Bombsquad has stuck together and played a really intelligent game. They haven’t made big moves but they acknowledged that a tight alliance is the best way to get to the end. But eventually every alliance has to turn on each other.

With the live eviction show airing on Thursday, I expected a bigger surprise than the ousting of Christine. Given that there was a plan to evict Frankie instead of Nicole, and given that Caleb shared this plan with Frankie, I only assumed that the Frankie versus Derrick match would finally come to a head. But then Derrick won HOH and we had a double eviction episode with no drama and eerie calmness. The entire episode just reinforced Derrick’s intelligence. He didn’t scramble to nominate anyone. He had a plan going into the night and he followed through. Derrick had two possible targets: Christine and Frankie. He targeted Christine but threw Victoria up as a pawn to please the remaining men in the house. Derrick would have made a big move had Christine won Veto but that didn’t happen.

I do somewhat question Derrick’s choice of evicting Christine this week instead of Frankie. Ultimately, I think Frankie is the largest threat to Derrick’s game but then again Christine has proven to be a strong competitor, especially in intellectual competitions. In the end, I think Derrick is putting too much faith in Frankie. He thinks Frankie will target Victoria should he win HOH next, but really that would be a dumb move. In fact, at this point bringing Victoria to the final two is the best move for every houseguest.

This upcoming week could have been the most important week of the game and the most important HOH. With Derrick ineligible for HOH, he needs to rely on Colby or Victoria to win and secure his stay in the house. He may fair well with a Caleb win also, but if Frankie wins I suspect he’ll finally break up the alliance. But ultimately, none of it may matter as a new twist was teased which could save both nominees from eviction. I hate this twist. Inevitably, there will be some sort of punishment for the person who pushes the button (ie. you only win $250K in the final, or you can’t compete for HOH) but if the nominees can push the button, there’s no reason they wouldn’t. Paranoia will set in and both nominees will fear eviction. This means the entire week is a waste, which seems pointless.

Alas, I’m still excited to see the end of the show. Derrick is the most deserving winner at this point. Next in line would be Colby who’s played a great social game but been pretty quiet in strategy until recently. Caleb is likely third in line for the win. I wouldn’t have said that a few weeks ago but he is doing well in competitions, and socially everyone seems to like him. I certainly don’t want Caleb to win, because it would just inflate his ego too much and verify (in his mind) that he’s been running this game. Frankie has been annoying the crap out of me. His “in your face” approach to the social game is getting a bit much and he’s slowly turning into a bit of villain (or the editors are finally showing his true side). I’m keeping my fingers crossed that he’s the next one out of the door, but he still has played a decent game. And then there’s Victoria. Victoria probably doesn’t have a shot in hell at winning this game, but she probably has a decent shot at making it to the finals. Maybe the jury will be bitter and they’ll award her by default….but probably not.