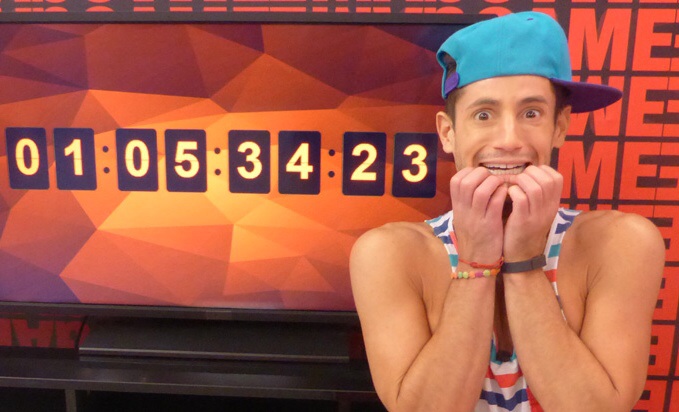 BB16: The Queen is Captured

The Big Brother producers must be SO happy: the reset button did exactly what they wanted. After winning HOH and the Power of Veto, Frankie went from being in the most powerful position in the house to being nominated.

Going into Monday’s episode, Caleb had already been crowned as the new HOH and nominated Victoria (for the 8th time this season…that must be some kind of record?) and Frankie. It’s no question that Frankie is a beast when it comes to challenges, but Beast Mode Cowboy is probably second in line. One thing Beast Mode Cowboy is not a beast at is strategy. Frankie immediately begins asking Caleb why he was chosen as the nominee, and Caleb gives some poor excuse about how Derrick didn’t have the option to compete in either HOH so it seemed unfair to nominate him. Frankie pushes Caleb even further to give a better answer, and Caleb admits that the group was concerned Frankie would win Veto and possibly save Victoria if he was not nominated. Derrick and Cody put it best in the diary room when they each called out Caleb for his terrible game play. The boy can win competitions but he cannot use his brain (case in point: Telling Frankie he was going to throw the Battle of the Block competition and sitting out instead of just throwing it, and even further case in point: when he told Frankie that he considered backdooring him just a few weeks ago).

Really, this episode was all about the second Power of Veto. The houseguests were given the extremely rare opportunity of knowing exactly what the competition would entail thanks to the reset button twist. Knowing that the competition would be the facial morphing one, they all did what any smart houseguests would do and studied the wall of faces. The editors cheekily cut to Victoria studying the nutrition label of some food while the boys prepped for the veto (side note: I’m curious to know what actually happens on the live feeds. Does Victoria play the game? Is she strategic or is she really this dumb player that the editors make her out to be?). So the veto competition beings and Cody starts with a time of about 2 minutes and twenty seconds. This is leaps and bounds better than his time last week, but can he beat the competition beast Frankie? Yes, he can and he did!

Frankie tries his best to save himself this week. He talks a lot about loyalty and explains that he’s been an honest and trustworthy player all season (…I’m sorry…are we ignoring the fact that he turned on his entire alliance back when Nicole and Christine won HOH?). His words change no one’s mind as Cody and Derrick finally evict Frankie. What follows is validation why I’ve grown to hate Frankie as he ups the showmanship and provides parting words to each of the houseguests. He tells Victoria to win something. He tells Cody he’s had better. He tells Derrick to watch after his fish. And he tells Caleb, “even though I’m a queen, I have been the king of this house for 88 days.” He then becomes BFFs with Julie Chen as I begin vomiting at home. During his exit interview, he again talks about his honest game play and how he was loyal to his alliance, and then contradicts himself a minute later when he explains how the revelation of him being Arianna Grande’s brother helped the house to forget all of his lies. Listen to yourself Frankie. Stop pretending you played a loyal game. You are the first one to try and oust your alliance, and they beat you to it.

Let’s talk more about Frankie. He was my favorite player early on. He was clearly the editor’s favorite player too as they made him out to be the star of the season. As the game progressed, America/the producers/some of the houseguests started to realize that the real star was actually Derrick and his quiet gameplay. The two played such opposite games that you knew it would come down to a battle between them. In a Derrick-less season, Frankie probably would have convinced Caleb to keep him around and he would win this game. He was a competition beast. He was really strategic. He was an all-around player, but the reason I dislike him so much is because he loves himself so much. It’s one thing to be cocky in the diary room, but it’s a whole other thing to be cocky in front of the house and Frankie has told them on several occasions how big of a threat he is. If he loved himself a little less, Frankie might have stuck around a little longer.

On the flip side, Derrick has played such a quiet game that I worry he’s not guaranteed a win. This week we saw Cody step up his game and win POV. We’ve seen Caleb as a competition winner several times and Caleb certainly thinks he is the most strategic player in the game. And we’ve seen Victoria too: we’ve seen her, she’s there, end of story. With Derrick’s HOH win after Frankie’s eviction, he has guaranteed himself a spot in the final 3. It’s a challenging week because ultimately the winner of the Veto decides the outcome of the final three, so there’s no way to predict who will leave. I do think Derrick’s best bet is to oust Beast Mode Cowboy and hope that Victoria and Cody take him to the finals. I would love to see a Cody/Derrick final two but I do wonder how many jury members really know how well Derrick has played. We all know Nicole knows, and that’s why she was evicted, so here’s hoping she’s had enough time in the jury to let the other’s in on the awesome gameplay.

Frankie called himself the king of the house this week. A few days prior Caleb called Frankie the pawn. So let’s use this chess analogy to determine who the players really are:

The Pawn: Victoria. I mean, could this be any more obvious? She has been the pawn for 8 weeks. She is completely expendable so she continues to be nominated, but ultimately the larger threat is always evicted. She’s such a perfect pawn that it, if given the option to take her to the finals, any intelligent player would do so. Bottom line: Caleb, Derrick, and Cody all win against Victoria in a final two.

The Knight: Caleb. The Knight is powerful chess piece. It has the most complicated move and is thus one of the larger threats. If you take down the Knight, you’re one step closer to taking down the King. The thing about the Knight is that everyone knows it’s a threat. Caleb is loud about his gameplay. He’s open with his strategy. He is a threat, and everyone has known it but he’s likeable and also somewhat predictable. The Knight typically doesn’t make it to the end of the game because it is viewed as a strong piece. I suspect Caleb won’t make it to the end either, because he is now the strongest physical competitor left in the game. Also, the Knight is the only piece that can pass through his own teammates. Caleb, without knowing it, has passed in and out of his alliance. He was never a Detonator but somehow outlasted most of the Detonators. He also would love nothing more than to be considered the knight in shining armor so I’ll give him the privilege.

The Rook: Cody. I’m no chess master, but in my games the rook tends to be a fairly strong piece who sticks around late in the game. With the ability to move forward, back, right, and left as many spaces as he wants, the Rook can take out some serious competition. He does need to work with his teammates to ensure he stays safe. The rook actually tends to work best with the other rook by his side (but for the sake of this analogy we can consider ‘the other rook’ his alliance members). The rook has always been my favorite piece because its movements are easy to understand and it can quickly go from one place to another. I think Cody fits well with this description as he is arguably the most likeable personality in the house, has had the strongest teammates who are seemingly devoted to him, and is a somewhat predictable player.

The Queen: Frankie. And I promise this isn’t just because he’s gay. The Queen is the most physical and obvious player in the game. All players keep their eye on the Queen because they know that if the Queen targets them, they are next. It’s really a great privilege to be compared to the Queen in chess, but ultimately the Queen tends to be captured before the King. Everyone knows what the Queen is capable of and they work as a team to destroy her. Sorry Frankie, but for 88 days you’ve been the Queen.

The King: Derrick. I was going to say Derrick was the Queen of this season as the Queen tends to be the most powerful player in chest, but it’s actually the King who holds all the power and it’s just not that obvious. When you think about it, the entire game of chess revolves around the King and protecting the King. All the players are just minions in the quest to keep him safe. The King can only move once space so he’s barely noticed, but the Queen and all the other players take out all the others and often sacrifice themselves so the King can survive.

Here’s hoping we don’t see a checkmate and Derrick wins this entire thing.