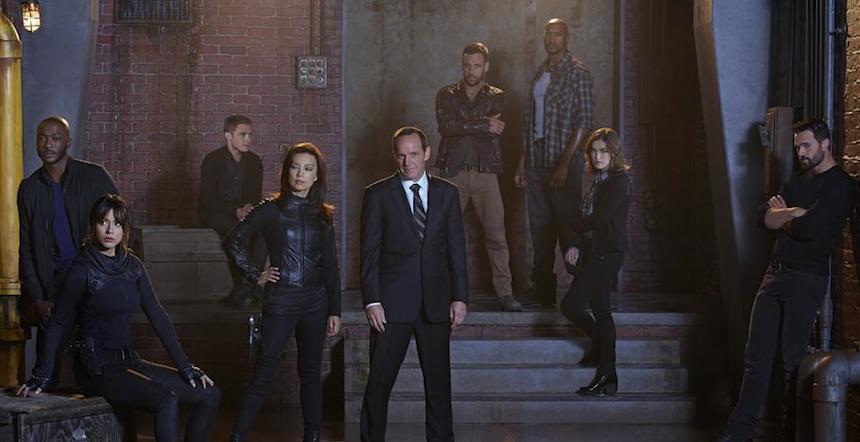 The first five minutes of the second season premiere of Agents of SHIELD was a quick reminder of the show’s biggest problem: it’s a Marvel TV show, not a Marvel movie. In the opening, viewers were treated to a cameo of Peggy Carter and the Howling Commandos of the first Captain America movie as they confiscated a dangerous artifact from HYDRA at the end of WWII. (Peggy and the Howling Commandos will all feature in the Agent Carter, set to premiere mid-season). Their short appearance was just a reminder of how beloved the cinematic Marvel characters are, and how much more invested most people are in the films.

Agents of SHIELD has a very difficult job. It has to be a part of the Marvel canon universe and play by its rules and follow its timeline, but can’t overshadow the events of the movies. As a result, the stakes never feel very high. Season 1 revolved heavily around Extremis, but since Iron Man 3 took out the creator of Extremis, and had Tony Stark find a cure for it, it made it seem like the Agents of SHIELD were behind the curve. The show beautifully incorporated the events of The Winter Soldier into the tail end of its first season. The Winter Soldier revealed SHIELD had been infiltrated by HYDRA, a secret Nazi subsect, and that one of the main characters of the show was actually a traitor. Brilliant. The problem was until the show got to that point, it just felt like a procedural, and not a particularly interesting one. It was stalling, waiting until it could play off the big reveal, and as a result, most of the first season was stagnant.

This season might have a similar problem. SHIELD is in shambles and has to rebuild itself. The team discovered HYDRA isn’t actually taken care of, it’s just gone further underground. Anyone who watched The Winter Soldier already knows that, and knows that Samuel L Jackson’s Nick Fury is on it. But okay, let’s pretend this is new information. The show kind of addresses the fact they need to deal with this. They also introduce a new antagonist who…has…special evolutionary powers? Mutant. He’s a mutant. I know Marvel sold the rights to X-Men so they can’t really say mutant, but I’m pretty sure the guy’s a mutant.

The reason this is enough to give one pause is The Avengers: Age of Ultron will also deal with the age of mutants. I mean ‘miracles’. (Side note: watching The Avengers dance around using the ‘m’ word for a movie was already going to be hilarious. How is Agents of SHIELD going to do it for a whole season?) Is Agents of SHIELD going to have another season of stalling, wait for a Marvel movie to be released and handle most of the heavy lifting, then have the show clean up the pieces in the last few episodes? When Agents of SHIELD is good, it’s really good. But it’s not worth sitting through a season of mixed episodes if they’re only going to pull out the big guns towards the end. If for most of the show there aren’t any stakes, it’s very hard to get invested in the story and characters.

This week’s episode was all over the place. A lot of individual elements were enjoyable. Coulson, who is supposed to be the team leader, felt like he was barely in it. When he was present, Coulson’s struggle as newly appointed director of SHIELD was an interesting new facet to his character. Melinda May and Trip are always solid whenever they’re on screen. Fitz’s recovery after sustaining brain damage last season has the potential to be a compelling storyline. And Lucy Lawless was a great guest star, though she and her team could have been and should have been used more. Individually, all these elements were strong. But when put together, the episode lacked focus.

Until Agents of SHIELD forges its own identity slightly more independent of the movieverse and decides what to focus on overall, viewers will continue to get a little bit of everything, which adds up to a whole lot of nothing.