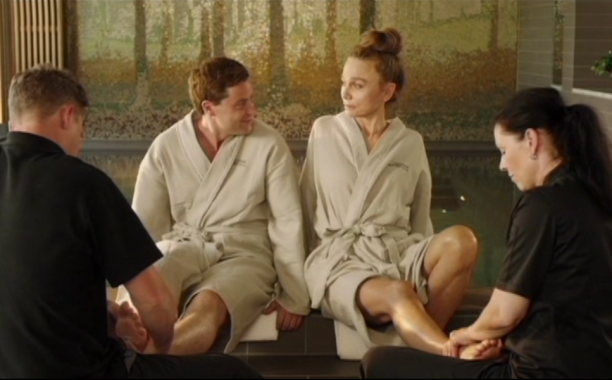 Bruce is still struggling to fit in this week on Welcome to Sweden and it’s affecting Emma’s relationships. Her friends don’t want to invite her to parties anymore and her mom says that Bruce isn’t even trying. Bruce tries to fix it by calling her friend on the phone to get an invite to the party, but doesn’t try to have an actual conversation with her and just says what he wants to using Google Translate. He also takes Emma’s mom to a spa, which ends disastrously, but they make progress and she even sends him a friend request, which he is a little too excited about.

Bruce and Emma go to the party, and Bruce does his best saying hi to everyone and asking how they are in Swedish. He messes everything up by retelling a story Emma’s friend had told about her husband to the husband. It’s super awkward. Plus Bruce ruined the floor he worked so hard on because nobody told him that you don’t wear shoes inside.

Things get even worse for poor Bruce when his only friend Hassan, who Bruce kept saying wonderful things about, breaks up with him. Bruce had been struggling the entire episode to tell his friend that he’s an American, but Hassan stops him before he can to tell him that he doesn’t want to be friends anymore. They have nothing in common and Bruce is holding him back from making true Swedish friends. It was so telling because Bruce had pretty much been using Hassan to avoid making a real effort to fit in and make real Swedish friends. So Bruce starts screaming he’s an American, which, again, makes things horribly awkward for him.

Bruce’s misery doesn’t end there though. His parents call him at the end of the episode to let him know that they’ve booked a cruise and are coming to visit him. He is less than thrilled, but I have a feeling it’s going to be pretty to watch these two families interact.