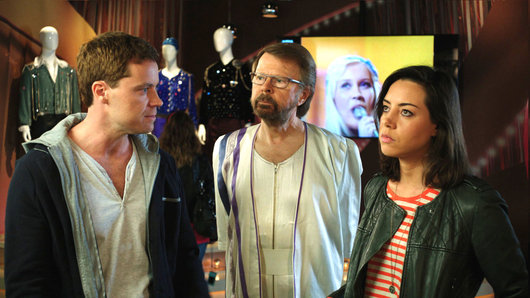 Welcome to Sweden had two episodes this week, and they were by far the best episodes so far this season. There were parts that were absolutely hysterical. I loved seeing Bruce’s parents clashing with Emma’s family. They were both a riot, the whole ABBA thing with hilarious, and I’m pretty much obsessed with both Amy Poehler and Aubrey Plaza, so seeing them again was awesome.

The first episode “Parents!” was all about Bruce’s parents’ visit, obviously. And it all went wrong, obviously. Bruce’s parents did not make a good impression, especially his dad who had really firm beliefs about America and religion. He especially didn’t agree with having children out of wedlock, which was a huge problem because Emma’s parents didn’t get married. Plus, Emma thought she was pregnant. It turns out she wasn’t though. Bruce was not helpful in that situation at all, but honestly I didn’t feel like that plot was necessary.

“Homesick” dealt with Emma and her mom thinking that Bruce was feeling depressed when in reality he was just trying to fit in as a Swede. Aubrey Plaza, meanwhile, was stalking Bruce while on a mission to bring him back to the states. It was absolutely hilarious. In the end Bruce tried to be a money manager for famous Swedes, but that just blew up in his face. He finally talked to Emma and told her that he had an offer to go home and he kind of wants to take it. After hearing how much money he would make, Emma said they should definitely think about, which he took as “yes we should definitely go” and immediately started running around with joy while getting ready to go home.

So I guess for the last couple of episodes we’re going to see if Bruce really does go home and if Emma ends up going with him. Throughout the season I was mostly staying for the cameos. I thought the show was pretty funny and cute, but it wasn’t the best. The cameos were what made it. However, I thought these last two episodes were hilarious and incredible. They each had great stories and really funny moments. We’ll just have to wait and see if Bruce and Emma last though.