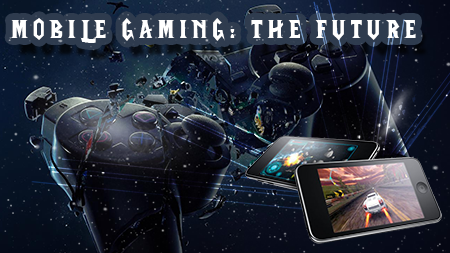 Wow, times have changed more than most people could have ever anticipated, haven’t they? Think back to the Video Game Crash of 1983, where the Atari and games like E.T. almost completely destroyed the gaming industry before it even blossomed. Now look at the world we live in. Video game sales are reaching exponential amounts and people are even making careers out of playing video games or talking about them in front of a camera. With so many changes and evolutions happening in gaming over the last few years however, what could be the important ones that will affect the industry in a profound way? Two years ago I might have said that motion technology was going to be the new fad in gaming, but I’m starting to change my tone as Nintendo has even moved away from this area and Microsoft had to remove the Kinect from its Xbox One in order to compete with Sony. What new component has been introduced to gaming that could change the future of gaming in a huge way? Mobile gaming.

In a fairly early state, Mobile gaming is still frowned upon by hardcore gamers as something only casual players enjoy, but that is starting to change in a big way. With newly released games like Modern Combat 5, players can basically play a reimagined, mobile version of the Call of Duty franchise on an iPad or mobile phone. The graphics are reminiscent of the PS2 generation of consoles, but they are slowly improving as tablet technology advances. The biggest drawback to gaming on a mobile device has to be the controls; throwing up virtual joysticks and static shoot buttons really gets clunky and difficult in various situations. How could anyone really get into a mobile game with difficult controls, you ask? Apple thought about that and answered by enabling newer devices to be Bluetooth compatible with certain controllers, so now you can start up your iPad, grab a controller, and play games like you’re on a console that lets you buy games for $6.99 that would be $59.99 on an actual console!

It’s obvious that casual gamers do enjoy the games that thrive on mobile platforms, like rearranging candy squares and making their own farms or cities, but a lot of them also enjoy games with more depth and some story. I am an avid gamer across every platform, but I do enjoy sitting down and playing some games on my iPad from time to time. Many games are even being ported over to the IOS to take advantage of the new iPad Air processor and a new API called Metal that will be coming out with the IOS 8 operating system. This addition to the IOS will bring gaming to life on a whole new level, allowing more particle effects and atmospheric elements. Right now is the beginning of a time where mobile gaming will take off; what is better than having an arcade in your own pocket?

Do I honestly think mobile gaming could ever compete with or derail console or PC gaming? Not a chance, but that doesn’t mean that it won’t become a sidekick to the hardcore ways of gaming. Rather than competing, I think mobile gaming will be a great alternative or companion for gamers to be able to participate in their games on multiple levels and on multiple platforms. World of Warcraft already started working toward this trend, as did other games like GTA V and Battlefield 4. By letting players access their inventory, auctions, armory, and even talk to guild members on mobile devices, World of Warcraft is doing what a lot of games will want to do in the future; giving more access to their virtual worlds even on the go. If you can’t make a hardcore gamer play some great games on his phone, you can at least tease him with a new way of checking in on his favorite game when he’s away from his PC or console.

Let’s embrace mobile gaming and help integrate it into the gaming world instead of ostracizing it because it’s only at an early stage in its development.