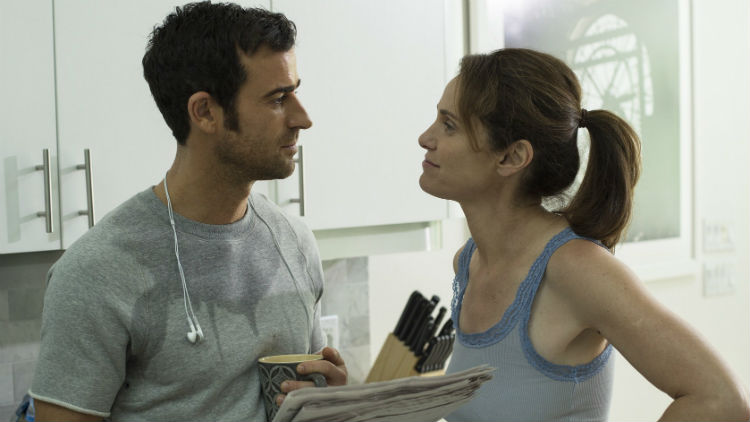 The Leftovers: The Garveys at their Best

This week’s episode of The Leftovers, “The Garveys at their Best” finally showed us a bit of what life was like before everything got all screwed up. And yes, everything was screwed up back then too. And things were just as weird and kind of sort of supernatural and connected. Patti was Laurie’s patient and talked about how they could both feel that end was coming. And guess who Laurie’s prospective dog breeder was? Gladys of course.

We see a pre-hospitalized grandpa who’s still the chief, has a surprise birthday party, and tells his son to shape up. The episode showed a less than happy Garvey family. Kevin wanted out. He spent his time running, tracking down a deer that’s ultimately hit by a car, being miserable, and telling his wife he doesn’t want a dog. Coincidence that he has that whole thing with dogs now? Of course he also cheats on Laurie. The woman he cheats with in the end disappears while they’re having sex.

Jill’s really the only one who’s happy in that family, though of course she ends up being one of the most screwed up. She has a good relationship with Tom, but he’s getting into all sorts of his own trouble. They witness someone disappearing at a science fair together.

Laurie, meanwhile, is struggling to tell Kevin that she’s actually pregnant. She goes to the doctor, and sees the baby disappear on the monitor. That’s all kinds of messed up. Her story was definitely upsetting.

Nora has had a really interesting story on The Leftovers though. We’ve slowly seen how her perfect family has changed throughout the season. First she found out that her husband cheated, but she was unhappy long before that. She was at her wits end when they disappeared in her kitchen. She had been trying to get a job for the mayor, who was running for the position at the time and had something going with Kevin’s dad, but her family was less than helpful.

I really appreciated this flashback episode, though I was a little annoyed that weird things were happening even back then and that nearly everyone we met just had to be connected to each other in some way. Also, that deer’s totally haunting Kevin, which is weird. So we learned a little more of the characters’ backstory and where they were before the departure, which informed us a bit about why they are the way they are now. Things certainly weren’t perfect before this all happened, which of course is true.