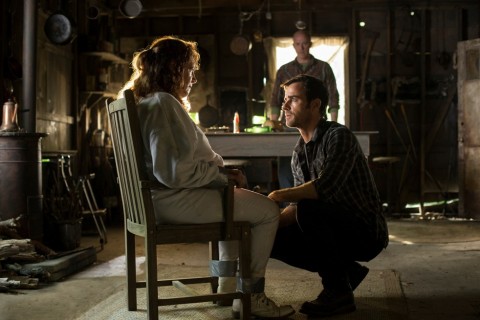 Okay, so there are two episodes of The Leftovers left, and I’m always left with so many questions that never get answered. This week, in “Cairo,” Kevin blacked out, which we learned he has been doing this whole time (his missing shirts were even in the woods there!), and kidnapped Patti. Patti and he talked and Patti was not going to let Kevin get away with this, though he wanted to let her go. Also that bald guy Dean was there because they’re a team. Dean’s real right? Or is this like Fight Club? Anyway Patti revealed that she planned Gladys’ death, which we kind of knew, and that Laurie’s is coming up. She also talked about how the GR strips itself of everything so they can just remember what happened when everyone else wants to forget and gives people purpose. She started yelling at Kevin that he understands what’s going on, and I wanted to yell back, that I really don’t. In the end he lets her go, but she kills herself, which I guess means Laurie’s in charge now.

But Laurie wasn’t having such a good time because Megan was being annoying and kept talking because she was mad at Matt. She really did not grasp the vow of silence thing, and the whole thing was really hypocritical. She eventually went to apologize to Matt with Laurie and Nora confronted Laurie about Jill. It looks like they have something big planned for the town tough. Patti was laying out clothes earlier in the episode and they started unloading bodies I think. They’re probably those bodies that guy that Nora met sells that look like the people who were taken.

Meanwhile, Nora went to dinner to get to know Jill and Aimee and Jill was super angsty as usual. She asked Nora about her gun, and when it wasn’t in her bag she and the twins went to look for it in her house. She also had a fight with Aimee and Aimee moved out after Jill asked her if she slept with her dad. All of this led to Jill showing up at the GR and asking if she could stay there, which I do not want to happen. Laurie’s been quietly struggling with her attachment to Jill all season, so maybe she’ll do the right thing and turn her away, but let’s be honest, this is The Leftovers where bad things happen.

Things actually happened during this week’s episode of The Leftovers, and we did learn things. Questions were answered. But I’m not sure enough will be revealed by the end of the season.