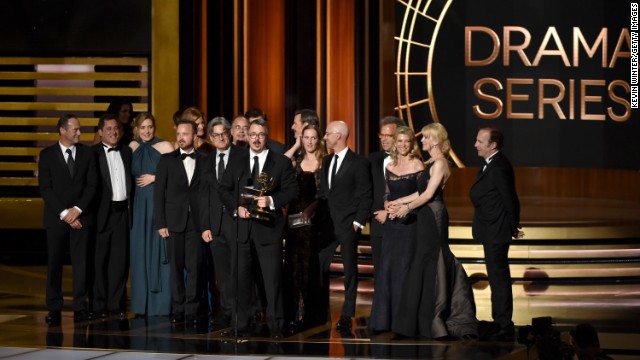 Emmy Week: Lazy & Stale, a Wrap-Up of the Show Itself

First and foremost, I must say I am happy with all of the Breaking Bad wins, that show deserved every trophy it won tonight, but more on that later.

Let’s start with the host, poor Seth he tried, he started out with some great zingers about cable television and Netflix being the most nominated shows, but slowly the show and his jokes started to fall flat. Did their need to be a bit making fun of television theme songs with Weird Al?  The best bit of the night was Meyers running around Billy Eichner, doing Billy on the Street.  After that he tried to use pal Amy Poehler to help out, and their bits were good, but mostly because of Amy.

The show itself was atrocious, sexist, the Vergara bit.  The mix of showing and not showing clips, which threw presenters when they were presenting the awards, was also messy.  Speaking of presenters Kimmel was my favorite, followed very closely by Julia Louis-Dreyfus, and Bryan Cranston, who both won tonight.

On to the winners, the Emmy Awards insist on separating the show into genres, which means they start with Comedy to keep your attention and then there is filler middle, and then they hold drama to end.  The last two categories of the night are seen as the “top two” Best Drama and Best Comedy, which is entirely insulting.  This has been done for many years now, and I think its time to change it up.

I will be breaking their genres down into my own:

If you look at the winners of the night there is a common thread, the have all won multiple Emmy Awards.  Modern Family tied the record with Frasier tonight, winning five for Outstanding Comedy Series; sorry Modern Family is no Frasier.

Julia Louis-Dreyfus deserved her win in Lead Actress in a Comedy Series, for Veep, but this was her third win; she is becoming the Helen Hunt/Candice Bergen juggernaut.

Jim Parsons won a fourth Emmy Award tonight; did he really deserve this tonight?  Gervais made an excellent joke about this, and I realized he only lost this award once in the last five years, and that was to Jon Cryer, seriously Jon Cryer, look it up.

I am somewhat alright with the Ty Burrell who won for Supporting Actor in a Comedy Series, but this is his second win, they couldn’t give this to Jesse Tyler Ferguson who’s tape was far superior?

Allison Janney had the funniest episode in the bunch, simply put.  Janney won two awards this year; she now has 6.  I was hoping for Mulgrew to win, but it looks like Orange is the New Black is just not their thing, and never will be in the comedy categories.

Louis C.K. was the best win of the night; he won for writing, “So Did the Fat Lady” this is also his second win in this category, he should have beat Parsons tonight, but that will never happen.  Gail Mancuso even beat out Jodie Foster, to be fair Mancuso directed the funniest episode of Modern Family last season entitled “Las Vegas,” but this is her second win in a row.

So Boring I think Missed It (Reality Programming)

Why even keep this category in the main show with only one award that The Amazing Race has only lost twice now?

Now that Jon Stewart has stopped winning, it looks like this award could have belonged to Stephen Colbert for 8 years too, if he wasn’t ending his Report to move to network late night.  I am happy for Sarah Silverman who won in writing, one of the best wins of the night.   Three categories here, and the winner for Directing was directing the Emmy Awards, interesting.

Are You Kidding Me? (Mini-Series/Movie Categories)

Sherlock: His Last Vow won three awards tonight, and five at the Creative Arts Emmy Awards, making this fake television movie, which is really a mini-series the show with the most wins this year.  Sherlock won Lead Actor (Benedict Cumberbatch) Supporting Actor (Martin Freeman), and Outstanding Writing.  I am utterly shocked that this show won the most Emmy Awards, but like with most things they are behind the curve.

American Horror Story: Coven, had the other more surprising wins of the night, Jessica Lange and Kathy Bates won the actress categories.

As these categories were winding down I was scared for both Fargo and The Normal Heart, Fargo only won directing, and not for the correct episode, and Heart had won nothing.  In the end Fargo won Mini, and Heart won Movie, which was great, but how and why did this happen?  The world may never know.

I think Breaking Bad, Margulies, and True Detective deserved every win that happened tonight, it’s hard to argue with them.  Bad had one of the best final seasons of all time, and the acting was great.  Margulies was the token win for The Good Wife’s buzz this year.  True Detective should have been in Min-Series, and they messed up and were punished.  On the plus side, none of these people will be back to win next year, except Margulies but she probably won’t so these categories will have a lot of new blood.

While repetition was the biggest winner of the night, the biggest losers were HBO and Netflix.  HBO won just a little over 10 awards at the Creative Arts Emmys, and 2 tonight, that’s barely 10 percent, and is one of their worst years in recent history.  Netflix was brushed aside too, and won 4 of their 31 nominations.

I think they Emmy Awards were a massive failure this year, and the show was a mess.  The only worthwhile moment was the touching  tribute to Robin Williams from Billy Crystal, the only silver lining in this pile of shit show.