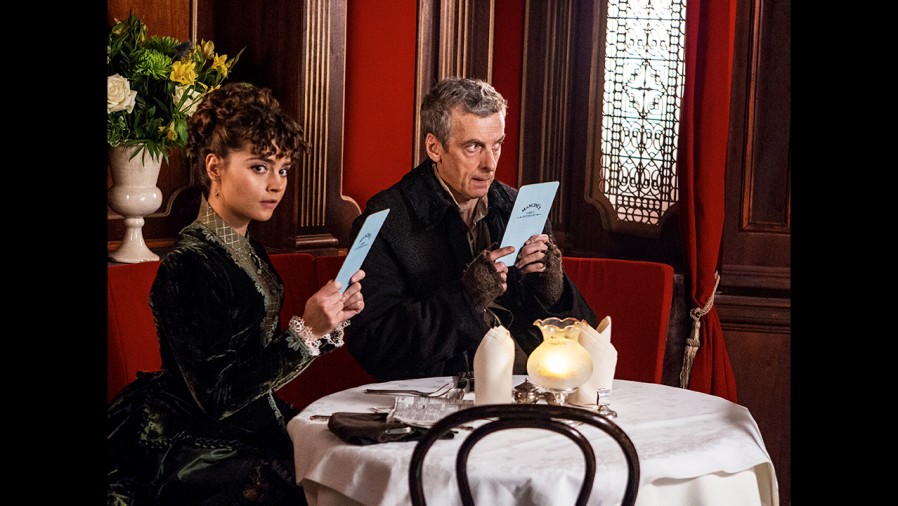 The premiere of Doctor Who’s eighth season was aptly named ‘Deep Breath’, because you will have to take multiple in order to calm down and not be annoyed at the bizarre plot, tired repetitions and frankly squandered opportunity. Peter Capaldi’s debut as the Twelfth Doctor should have been an absolute triumph, and he deserved a much better episode. Fresh off a regeneration, the Doctor has a new everything – new face, new body, new personality. One of the biggest problems with ‘Deep Breath’ is the Doctor was barely in it. Much of Twelve’s screen time was him being confused and out of sorts. When Capaldi finally had the opportunity to be the Doctor and not just some angry confused man, he was fantastic.

The buzz on the internet before his debut was that Capaldi’s Doctor would be much darker than past Doctors. I find that a bit contentious; David Tennant’s Doctor became very dark by the end of his run. Matt Smith’s Eleventh Doctor even became dark towards the middle of his run. What was troubling about Eleven was he would commit mass murder or other awful, or at the very least, highly unethical deeds and the audience was supposed to forgive/forget he was actually a pretty terrible person (or, you know, alien) because he wore eccentric clothes and had quirky catchphrases. I would agree that Capaldi’s darkness is acknowledged on the show, which is an improvement. He also brings a lot of intensity to the role, which he balances with tender moments shared with Clara. While I couldn’t get a firm sense of who the Twelfth Doctor is just yet, I am excited to see more of him, largely because I have faith in Capaldi.

I also have faith in Jenna Coleman, who did the best with what she was given. Coleman is a talented and charismatic actress, but there’s only so much she can do with a character who spent a great deal of the episode pouting, complaining and being in denial about the Doctor’s regeneration instead of being useful. Sure, for a normal person, watching someone you know and love get a new face can be a lot to swallow. But Clara isn’t a normal person – she travels through time and space and deals with the fantastical and unexplainable every day. Can she take time to adjust? Absolutely. But Clara’s internal struggle shouldn’t threaten to take over the episode- it should work with the plot, not interrupt and threaten to commandeer it.

For example: Clara had a long, bizarre conversation with Madame Vastra in which Vastra tested Clara and her loyalty to the Doctor. Vastra and Clara had met before so this character test seemed unnecessary, and took up entirely too much time. It was just too much for a resolution that had little satisfaction, since it wasn’t even the only scene devoted to Clara working through her feelings.

Also unsatisfying: the continued presence of Madame Vastra, Jenny and Strax. When the three of them appeared in season 6’s ‘A Good Man Goes to War’, they were a welcome addition to the motley crew the Doctor assembled. When they came back in season 7’s ‘The Snowmen’, it was fun to revisit the ragtag team. But it didn’t stop there. But ‘Deep Breath’ marks the fifth appearance of the trio. This is problematic for several reasons. First because Vastra, Jenny and Strax live in Victorian London, and when they’re on the show, it means that at least part of the episode will be spent in Victorian London. Doctor Who is a show that can go literally anywhere, any time in the universe. Why does it have to keep going back to Victorian London? At least when the show fixated on modern day London, it could be explained as the show’s way of connecting with its audience. In any case, Victorian London was fun the first few times, but now it’s stale.

Which is the other big problem with Vastra, Jenny and Strax. They haven’t been given a chance to evolve into much beyond quirky side characters. Until they are, perhaps it’s time to retire them. Show runner Steven Moffat is good at picking up on secondary characters or lines of his show that fans like. What he’s not so good at is letting them go. Twelve had a quick line referencing how he missed Amy. Nostalgia is good, but a lot of the nostalgia on the show seems focused on Amy. Karen Gillan has moved on (and is kicking ass in Guardian of the Galaxy), and it’s time the show moves on too. It needs to stop building her up as the most important companion of all time. She was great, but so were the dozens of other past companions the Doctor has had. Matt Smith also had a brief cameo, which was bittersweet, but proved Moffat has yet to master the art of ‘leave them wanting more’. Smith was a wonderful Doctor, but his time has passed, and he should have had a clean break.

It’s not just the characters that stick around past their due. Let’s not forget how the amusing ‘timey wimey’ line from season 3’s ‘Blink’ was resurrected and not only used repeatedly, but spawned ‘spacey wacey’, and most cringe-worthy of all: ‘humaney wumaney’. Hopefully this twee pattern of speech died with the Eleventh Doctor. No such luck with ‘Geronimo’, which was uttered again this week. It was a joke in the season 5 premiere, and became a joke that just didn’t die. Now, I love a good running joke. But the show should work on having consistent characterization and plots instead of relying on catchphrases and gags.

This season, there’s a new mysterious woman who is meddling with the Doctor’s life. She lives in the ‘promised land’, which she claims is heaven. So we’ll probably puzzle over this for the rest of the season before being distracted with another new, shiny and overly-complicated plot without ever getting answers, as has been the show’s style of late. Disregarding the season long arc for a moment, the plot of the individual episode was a bit jumbled as well. There was a dinosaur, cyborgs who harvest human parts, and a skin-powered air balloon. It felt like the show took a lot of things it thought were cool and jammed them into one episode, hoping the audience would also think it was cool, and not care about coherency. And it wouldn’t be the first time.

Doctor Who admittedly has a lot of style; I just hope season 8 shows that it still has substance.