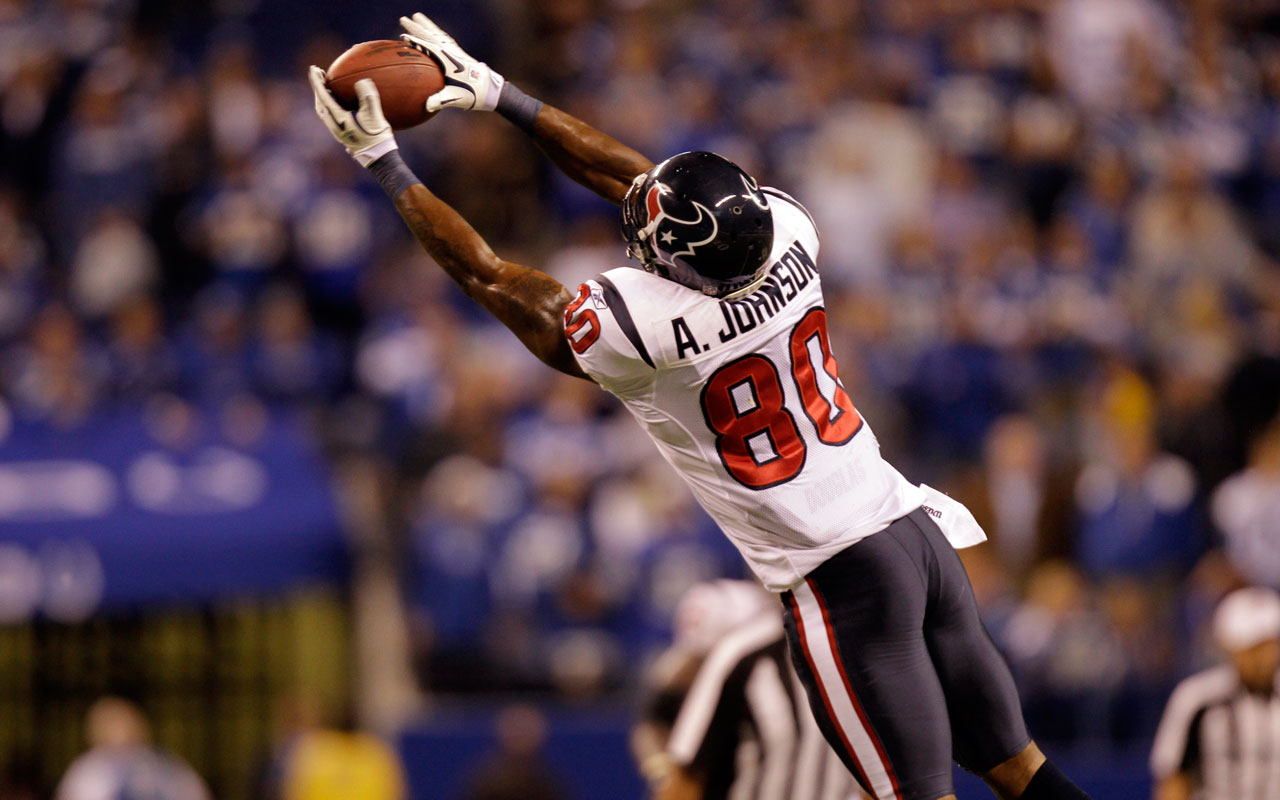 What’s Next For Andre?

The Houston Texans, after putting on one of the worst regular season performances in NFL history, have no doubt had an eventful 2014 offseason so far.

After ending last season on a dreadful 14-game losing streak, the Texans went into the 2014 NFL Draft with the first overall selection (thanks to that aforementioned losing streak). They used that pick to bring South Carolina quarterback-killing phenom Jadeveon Clowney to Houston, a selection which was a consensus no-brainer according to many experts, and one that instantly transforms the Texans defense.

This came after the organization hired former Penn State head coach Bill O’Brien to be the Texans new coach after dismissing Gary Kubiak from the position. O’Brien was seen as a good hire by many, as he had also recently worked within Bill Belichick’s regime in New England as the Patriots offensive coordinator. With O’Brien renowned as being a “quarterback’s coach”, the team then named newly acquired Ryan Fitzpatrick as their starting quarterback in an effort turn around the team’s stagnant offense.

Fitzpatrick had a lukewarm season last year in Tennessee while filling in for the injured Jake Locker, but he brings some experience to the table at a position which had little permanence in Houston last year.

And yet, when the team’s longest tenured player Andre Johnson saw all of this unfold, he decided that he wanted out.

Originally, he intended on making things work between him and the organization. However, once the team made it clear that Johnson wouldn’t be receiving certain bonuses on account of him skipping a number of offseason workouts, Johnson decided that he was set on leaving Houston.

Despite the ongoing saga though, the Texans have been reluctant to trade their star wideout. And can you blame them? Johnson, since the start of his career in 2003, has been one of the most dangerous and potent offensive weapons in the league. Closing in on 1,000 career receptions, Johnson has haunted defenses throughout his 11 year career in the NFL. But with so much tension between the two parties, it is possible that we could see Johnson catching passes for a different team in 2014.

And if you have any doubts about the matter, just take Johnson’s word for it. When asked about his future plans, he quite simply told NFL Network, “I don’t know. I can’t answer that question… I just choose not to talk publicly about it.” Now to me, if Johnson truly wanted to stay in Houston, he would say just that.

He went on to explain “It’s in-house, and that’s the way I choose to keep it. I’m not a big media guy, so I won’t … you know, I refuse to talk about it. Training camp is a few weeks away, so we’ll see what happens.”

So what exactly will play out between the Texans and their disgruntled 33-year old wide receiver? The way I see it, Johnson is ready to change teams. As reluctant as the Texans are to move him, the fact that they are withholding bonus money from Johnson (and rightfully so from a team policy standpoint) tells me that deep down, Johnson is expendable to them. If they were desperate to keep him, they would simply meet his demands and pay him his bonus.

But the team has made it clear that Johnson doesn’t deserve the bonuses due to him skipping OTAs and other minicamp activities. At the same time, Johnson has made it clear that he is ready to turn the page. And with news coming out, per NFL Media Insider Ian Rapoport, that teams are now coming forward with interest in acquiring Johnson, a deal could formulate sooner rather than later.

One good fit for Johnson that comes to mind is with the New England Patriots. Bill O’Brien left New England on good terms with Bill Belichick, and there were trade rumours between the two sides on draft day involving Patriots backup quarterback Ryan Mallett heading to Houston. The Patriots longstanding need for a deep threat receiver also comes to mind when considering a potential deal between these two teams. And on top of all that, I’m sure Johnson wouldn’t mind catching passes from arguably the greatest quarterback of all-time in Tom Brady.

One aspect to consider however, when forecasting potential landing spots for Johnson, is cap space. Johnson will make $10 million this year and $11 million three years from now under his current contract. This effectively rules out teams like New Orleans, who have little wiggle room in terms of cap space as their assets are tied up in players like Jimmy Graham, Jahri Evans and Marques Colston.

One team where cap space isn’t an issue, and one that would be an interesting fit for Andre Johnson, is the Oakland Raiders. Already with an improved receiving corps, adding a guy like Johnson would make life much easier for whoever wins the starting quarterback job in Oakland this year. Interestingly enough, that person could very well end up being former Texans quarterback Matt Schaub, who joined Oakland this offseason. But whoever it ends up being, whether it’s Schaub, Derek Carr or Matt McGloin, they’ll be excited to have both James Jones and Andre Johnson lining up on either side of them.

And let’s not forget another team with a wide receiver saga of their own, the Cleveland Browns. With their star wideout Josh Gordon struggling to stay out of trouble – and likely having played his last game in a Browns uniform – Johnson would add a much needed lift to Cleveland’s offense. And in bringing Johnny Manziel to town this spring, the Browns have already proven that they are looking to make some noise this year.

The Indianapolis Colts are an additional team which could comfortably take on Johnson’s contract, but it’s doubtful that Houston would trade such a dangerous player within their division. They would effectively be gifting the best team in AFC South a receiving corps consisting of Reggie Wayne, Hakeem Nicks, T.Y. Hilton and Andre Johnson. That looks to me like a group of receivers belonging to a fantasy football team rather than a real one. Houston is smarter than that.

If all else fails, can it be possible that Houston gets their way and Johnson stays put? As I said earlier, I’m fairly convinced that Andre Johnson is on the move. But if he stays, he would be sticking with a team that does have a promising future. They now have one of the most feared defenses in the league after drafting Clowney and Louis Nix III, pairing them with Pro Bowler J.J. Watt on their defensive line. And offensively, Johnson would himself be paired with Houston’s second-year breakout receiver DeAndre Hopkins and their emerging tight end Garrett Graham.

At this point, it will likely take a lot of negotiating on the part of Bill O’Brien, Texans general manager Rick Smith, and Texans CEO Bob McNair to convince Andre to stay put. They will all need to assure him that, while the organization is in a rebuilding phase, the turnaround will be quick for a Texans franchise that won back-to-back division titles in 2011 and 2012.

Whether Johnson buys into that is another story. It may come down to whether he receives his workout bonuses, and the Texans might just have to budge on that if they want to retain Johnson’s services.