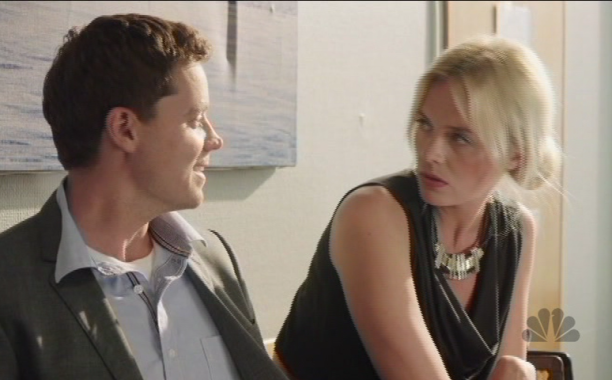 Welcome to Sweden is just getting better and better. It’s really hitting its stride, and I think that this episode was the best. Bruce was still figuring out his new Swedish life. He was hell bent on trying to get to know new people and his neighbors, but Emma told him that that’s weird in Sweden. Just say “hey, hey” and walk away. I loved the moment when Bruce had finally given up and just said “hey, hey” to the man who was begging him for help in Swedish. It was great.

The main plot of this episode had to do with Bruce and Emma trying to have their relationship validated by immigration. Emma was nervous, but Bruce didn’t get nervous until he saw a couple that was rejected. Then he just lost it. His interview went terribly, and I loved when he started comparing himself to serial killers. It was hilarious. The immigration actually went to ask Emma if she was in any danger.

This problem led Emma to start questioning their relationship, which her family only made worse. She was concerned that Aubrey Plaza kept calling him. She was an old client of Bruce’s and she did an amazing job. Amy Poehler was back and had asked her to call him and try to get him back. Plaza was also just flat out stalking him. Poehler said she’d fire her as her friend if she didn’t get him back until Plaza told her she’d have to go somewhere else for her drugs. I loved this part and just love them together so much. I’m so sad Parks and Recreation is ending. Emma’s dream about Plaza in their bed was priceless too.

Bruce’s furniture also finally came in, and their stuff did not go well together at all, which just led to more anxiety. Bruce suggested that they get rid of all their stuff and start fresh, which was really romantic until the immigration guy paid them a surprise visit in their empty apartment. Bruce showed up right on time and revealed he couldn’t get rid of his special football from the best left handed NFL player and they started bickering. After seeing them argue so much, the immigration guy said he had no problem believing they were a couple and ran away. They then decided that Bruce’s football could live on Emma’s chair, which was adorable.

This was a particularly funny episode of Welcome to Sweden. It’s getting funnier each week and I think that the problems in their relationship are pretty believable. Plus, I am loving all of these cameos. It’ll be interesting to see what Bruce does alone in his new country once Emma goes back to work. Somehow I think he’ll get lost, but we’ll just have to wait and see.