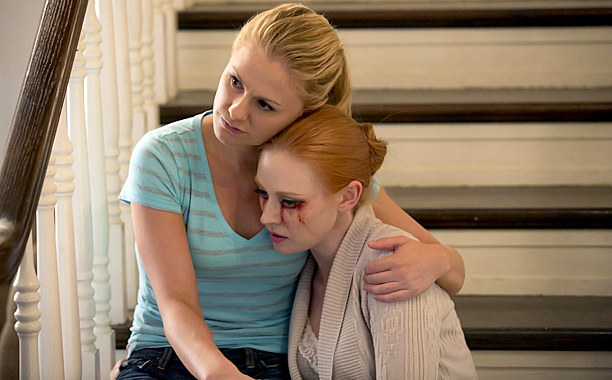 The season’s allegory for Hep-V as a type of HIV/AIDS is interesting.  With Sarah Newlin and co. behind the creation of this disease there is the thought or connection that like Hep-V, HIV/AIDS were human made diseases meant to wipe out a population, but what about the other victims?  This week explores that topic on a deeper level.

Pam and Eric vs. Yakuza on the Hunt for Sarah Newlin

I think if this were just Pam and Eric in this hunt I would be fine, but the Yakuza’s involvement seems odd, even for this show.  The Yakuza did invent True Blood so it makes sense to bring things back full circle, but this cat and mouse game for Sarah Newlin needs to end soon.

Sarah evades Eric and Pam, when they are attacked by the Yakuza; she goes to her sister, and magically informs her of the cure she drank, meaning Sarah is the cure for Hep-V; she has a purpose and this will drive home the fate of several characters.

Bill is positive…but so is….

Sookie!  In his haste to be seen by doctors and get his affairs in order Bill places a loud telephone call, which is overheard by  Jessica who calls Jason who wakes up a drunken Sookie to inform her of Bill’s status.  As Sookie and Jason go to comfort Jessica, Sookie has the realization that she may be positive too.

The Search for Tara in the Beyond

If Marcia and Greg did it why can’t we?

Andy catches Adilyn and Wade having sex, there is blow out, odd that that this is the one sexual hang up within the show.   As the two escape they are “helped” by Violet, the show’s most pointless character who wants to drain and kill Adilyn more than help her.

Sam Never has it Easy

At last week’s party Nicole said everyone is crazy, and this week she is packing up and ready to move in with her mother; she issues Sam an ultimatum that she will be leaving with or without him.  I think this is the best way to write off Sam, give him some happiness.  Sadly this relationship has been handled the laziest, and there does not appear to be any chemistry, like with Luna, but give the guy a break.