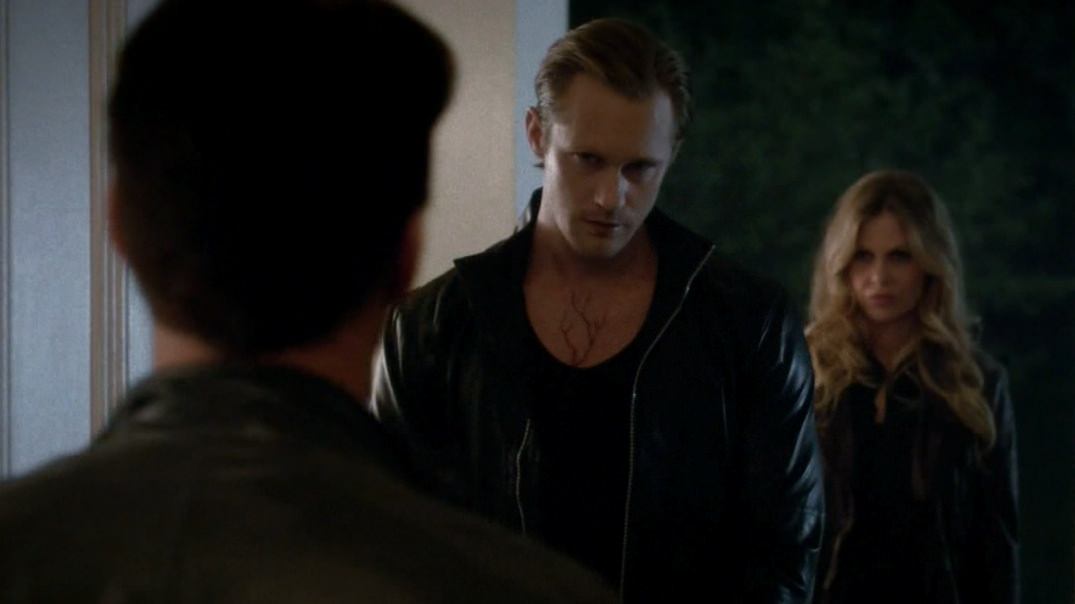 True Blood: Death Comes to Visit (not the Way You Think)

With the death of Alicide it was time for Sookie to let his father know, in a rare heartfelt moment you see him shed some grief.

Jason calls Hoyt in Alaska, to tell him his mother was killed.  If you don’t remember, which I didn’t Hoyt had his memory of Jason taken away from him

Mrs. Fortenberry’s death seemed to have more closure then Alcide’s, I’ll say it, and this show just does not know how to write certain characters.

Dear Sookie,
There are about a million other people who should be giving out advice.
Signed,
Are You Kidding Me?

In all seriousness Sookie gave some great support to Arlene’s two children, and she put Jessica, who was not eating in her place pretty well.  I have to say I liked her tonight.

Flashbacks with Pam and Eric

As Pam and Eric are flying to find Sarah Newlin, their plane heads to Shreveport, and glimpse into their past.

In 1986 we see the birth of Pam and Eric in their roles as owners of what we know as Fangtasia, but in 1986 it was a video store.  This role is given to them as punishment by the Magister played by Zeljko Ivanek, who was on the show in the early years.

10 years later the video store is up and running with Garbage playing in the background, God I miss Shirley Manson.  In this flashback we get to see how the screaming queen Ginger met Pam and Eric, and started working for Pam and Eric.

As 2006 comes about Ginger brings the throne with which we first saw Eric, and Fangtasia is born.  In reality it’s Pam telling the story of how she took credit for the whole idea from Ginger.

The Storming of Normandy…or Fangtasia

Scooby, I mean Sookie and the shrinking gang are planning to go in and save Arlene, and company from Fangtasia.  The episode did an excellent job at showing the birth of Fangtasia, and its status today as a den for Hep V vampires ready to be stormed.  In true Jason style he makes a terrible comparison, stating this is their D-Day.  Bill reminds him countless died, and Jason who probably never cracked a history book sits down.

Eric and Pam come and join the gang for the fight.  Pam’s one-liners were back and better than ever, and I can’t believe there is someone who hates Sookie more than I do.  I do like that Eric scolded Sookie for dating a vampire, their chemistry was always the best, and he was the only rightful man who ever made sense with Sookie.

The battle began and the pointless human who have recently been used the last couple weeks almost ruined everything.  Team Scooby won, Arlene and co. were recued, although Arlene almost died, and we saw a vision of Terry, but things ended up pretty happy.  What drama is left? Killing Sarah Newlin, and…?

I am curious to see what happens next, but this was the best episode of the season, the cast works best when trimmed down, that was always the problem too much baggage.