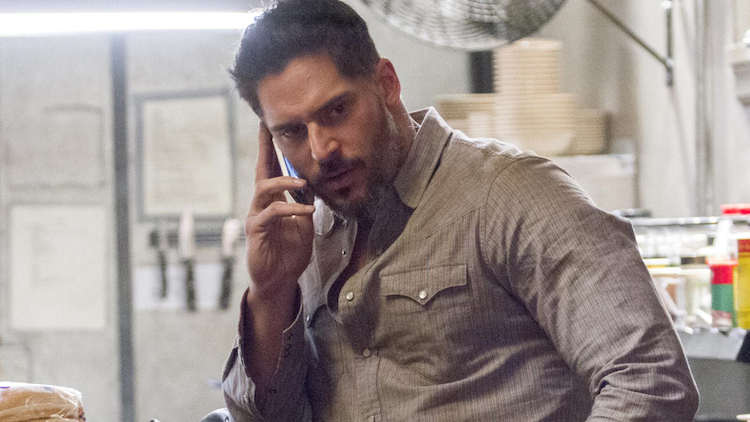 True Blood: Another One Bites the Dust

I was pretty shocked that Alcide died.  I guess in the final stages it makes sense, there was no way he was going to end up with Sookie, so I guess the only option was to kill him,

Joe Mangeniello who plays Alcide stated in an interview with tvline.com that he saw the writing on the wall when he was paired with Sookie at the end of the last season.

I guess this is where my frustration with this show comes into place.  They never seem to know what to do with their characters.  If you think about it both Tara and Alcide are dead, and I would say the writers have struggled to provide quality stories for either character,

Eric in France and Having Sex

To give the show credit it started out with the two people fans seem to care about most, Pam and Eric.

This was the best part of the episode; we got to see how Eric and Pam ended up where they were at the beginning of the show’s run, through a flashback of them in France.  Eric is “in love” with a Vineyard owners daughter, but he soon comes face to face with The Authority, who he and Pam have been alluding.  They are approached but none other than sassy Nan, and she told them that would have to work for The Authority; she also talked about their partnership with the Yakanoma Corp, and the beginning of True Blood.  Eric refuses, Nan sends Yakanoma after him the threaten to kill Pam or the “love” Eric must pick, he obviously picks because she is still alive..

I guess to be fair the show started on Sarah Newlin in yoga class, and beyond the flashback the only thing that brought Eric to life was hearing that she was alive and that they could finally kill her.

Back in Bon Temps…

The towns folk are holding everyone hostage with the guns the stole.  Apparently another black person who only says one line at a time can sway the town’s one smart cop, Kenya, the show just can’t make sense.  The best part of this stand off involved Jason taking charge to prove himself to Violet, who I confuse with Willow all the time because they look a like and are both incredibly generic characters, but I digress.  As Jason and Andy hold the town off, Jessica is shot, and the Violet goes after Mrs. Fortenberry, and rips her heart out.

Sookie has a plan to get her friends back, and she has gone to Bill to help.  Sookie and Bill talk about their awkward history of where he tried to kill etc., you know the normal thing for most relationships (insert eye-roll).

Back to the Alcide thing he goes mad with anger looking for Sookie, meanwhile Sookie shares with Bill that she does not love Alcide as much as he loves her.  I get that Sookie is the central focus to the show, but girl needs a therapist and to find a healthy relationship, come on!

Oh yea Sarah Newlin is Back

The show started with her, and then towards the end focused on her fucking her yoga instructor, who is then killed by the Yakanoma, looks like she’s next.  Seriously someone give Anna Camp her own show.

This episode brought things back together a little bit, but this show fell off the quality wagon a long time ago.