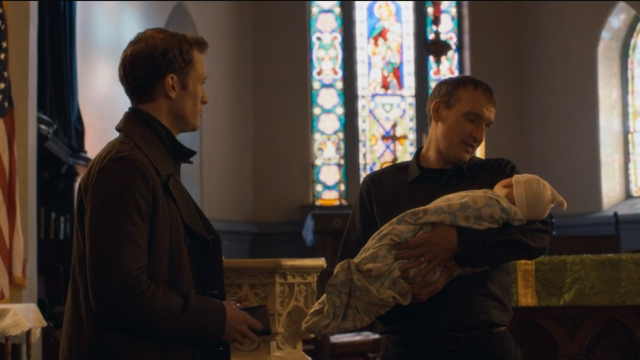 The Leftovers: Two Boats and a Helicopter

This week’s episode of The Leftovers, titled “Two Boats and a Helicopter” was definitely different from the first two. Rather than going from story to story as usual, we got to know Christopher Eccleston’s Matt Jamison a whole lot better than before. He is determined for people to know “the truth” about what happened. It certainly wasn’t the rapture in his mind. He has been publishing a paper that shows the bad things that people who were taken did. Naturally, people are not happy about what he’s doing. He even told his sister, Nora Durst, whose husband and children all disappeared, that her husband cheated on her.

Jamison’s had a terrible time though. His story’s pretty pathetic. His wife, Donna from The West Wing, is completely incapacitated due to an accident they were in because a driver disappeared on the 14th. They weren’t able to get any help because everyone was panicking since people had just disappeared.

This episode showed just how dire his life is, but it specifically revolved around his attempts to get enough money to save his church and pay his wife’s caretaker. The bank tells him that there’s a buyer for the church, but if he can get the money to him by the end of the next day, then he can keep his church. So, he goes on a pretty wild adventure to get the money. He takes money from behind the Garvey’s house, which Kevin’s dad apparently left for him. While he’s there, he sees that Laurie has actually been spending time there and seems pretty conflicted, but she tells him not to tell anybody she was there. He gets the money and goes to a casino and wins big. He almost gets the money stolen and may have killed somebody to get it back. Things are finally going to work out! Just as he’s heading to the bank, he sees one of the members of the Guilty Remnant, who also happen to have members following him around, gets attacked. He rushes out to help and he himself gets attacked.

Jamison wakes up in the hospital after a pretty crazy dream about everything that’s happened to him, including his parents dying in a fire, and rushes to the bank in time only to learn that it’s actually been three days and it’s too late. He goes to his church to see that the Guilty Remnant is actually the buyer.

This episode also showed the changes in people and how people. I really loved the scene where the husband snuck out to get his baby baptized without his wife knowing. I thought it was a really powerful scene.

I really liked this episode of The Leftovers. I enjoyed looking at one character in depth and sticking with him for the full episode. I liked getting to know a single character better and getting to see more of Jamison’s story and what makes him him. I have a feeling that the Guilty Remnant and he will clash a lot more this season, but I’ll be interested to see if he actually ends up joining the Guilty Remnant.