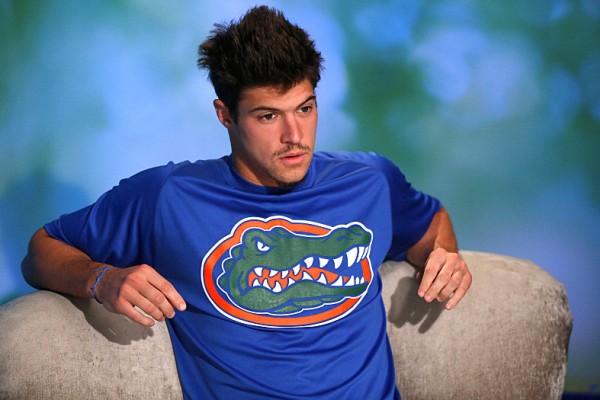 Big Brother is Back… finally

Confession: Big Brother has bored me this season. I watch it, live it, and breathe it all summer but it just hasn’t piqued my interest quite yet. Sure, this year’s casting directors did a pretty awesome job, but by week 2 I was a bit underwhelmed. That all changed tonight.

This has probably been the most exciting second week of Big Brother ever…and we have Devin’s crazy antics to thank for that. I’ve already expressed my disdain for Devin, but right now I am so happy that he is SO crazy. After convincing Paola to throw the Battle of the Block AND promising to save her should he win veto, Devin manages to win the veto competition and save Brittany, his main target, instead of Paola. CRAZY.

I also need to thank Devin for helping me to realize his alliance members are somehow simultaneously awesome and terrible people. He isn’t remotely awesome, but most of his comrades are. I say most, because while I like Caleb as a person, the guy messed up awfully this week. He and Devin fought over the fact that the alliance wanted Pow-pow gone, which Devin ignored by blaming Caleb’s actions on his love for Amber. The bros made up the next day, and Caleb stupidly told Devin that basically the whole alliance wanted him gone. Then the rest of the alliance proves how terrible they are by getting extremely quiet and not at t admitting to wanting Paola gone. Zack, bless his innocent soul, is the only one to confess his dissent and he gets nominated because of it.

Let’s take a pause to discuss Brittany. This girl was target number one by Devin. His entire alliance wanted her safe, yet someone they still would not admit that. Once Devin promised to save Pow-Pow, and the fear of Zach being nominated was presented, it was apparent that Brittney’s days were numbered. Yet somehow she managed to appeal to Devin’s fatherly side. I’m not sure if this interaction can be attributed to Brittany’s brilliant social game, Devin’s extreme craziness, or a bit of both; however, I’d like to give Brittney the benefit of the doubt her.

What follows all the drama of Wednesday’s episode is one of the greatest cliffhangers in Big Brother history (who knew they could even have cliffhangers?). Brittany, who was told that Pow-pow threw the Battle of the Block and promised Devin not to speak of it, refuses to let the Veto Ceremony end before interjecting: “Can I say something really fast?” Then we see interactions, without audio, of Brittany and Pow-pow yelling at each other and Zach yelling at (presumably) Devin or everyone.

One thing is for certain: I cannot wait until tomorrow night. Devin is insane. His alliance could be redeemed if they stick with Zach and give Pow-Pow the boot. I say the Bomb Squad trades Devin for Brittany and calls it a day.