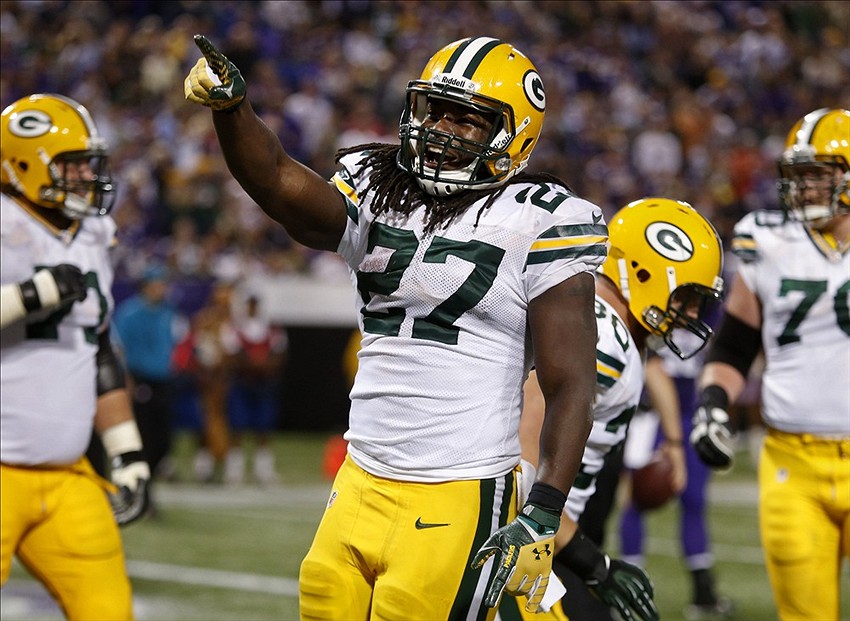 You’ve got to love the mystique behind the infamous sophomore slump. The beauty of it is that it can happen to anyone. Surely all of us can name, without even giving it much thought, an NFL player who had a monster rookie campaign only to go through a frustrating and underwhelming second season in the league. No matter the sport, the sophomore slump is no myth. Just ask Franco Harris or Robert Griffin III.

But while some players wilt in the face of the high expectations they’ve built up for themselves, others find a way to thrive. Despite the rest of the league now having a book on them, these players find a way to become the breakout stars of the future.

This coming season will be no different. There will be rookie studs from last year that will less than impress, while other second-year pros will have stellar seasons. But for now, I’m not concerned with who the busts will be, as I would much rather observe those in contention to have breakout seasons. Therefore, I’ve made a list (as I so often do). Here are my 10 players who could emerge as the cream of the sophomore crop in 2014.

Keenan Allen (WR) San Diego Chargers
Allen had a terrific 2013 rookie season, and is an easy pick as someone who will be a stud in 2014 and beyond. With over 1,000 receiving yards and 8 TDs last year, he became San Diego’s main source of production by the end of the season, and a reliable source for those “wow-factor” plays that teams so often look for in their receiving corp.

But can he do it again? I think it’s a safe bet to say that he can. While opposing defenses will now be looking to gameplan around Allen’s tremendous route-running ability and strong hands, I believe he will still succeed in keeping his production up. He was a major factor in the revitalization of Philip Rivers’ career last year, and that tandem could very well take the Chargers to new heights in the coming season.

Giovani Bernard (HB) Cincinnati Bengals
As the first running back taken in the 2013 NFL Draft, the North Carolina product has been a perfect fit with a Bengals team who are looking to develop an offense with ball-possession in mind. To do that, Bernard will have to carry a big load in 2014. But if last year was any indication, he should cope with the added responsibility just fine.

A carbon-copy of Baltimore’s Ray Rice, Bernard’s talents can be summed up by one particular play which took place during Week 9 last year vs. Miami. It was a 35 yard scamper into the end-zone (to tie the game in the 4th quarter no less) which saw him make four Dolphins defenders miss in the backfield, while promptly changing directions from one sideline to the other and weaving downfield for the score. Being one of the NFL’s most electrifying runners, look for Bernard to be a main fixture in Cincinnati’s offense during the 2014 campaign.

Jordan Reed (TE) Washington Redskins
It’s no longer a surprise that NFL offenses are looking to the tight end position as a major source of production. Thanks to the Rob Gronkowski’s and the Jimmy Graham’s of the world, tight ends like Jordan Reed have been given opportunities to prove their worth. To that degree, Reed made the most of his 2013 audition in Washington.

While ending the season on injured reserve thanks to a concussion, Reed shined in the games he was healthy for. As he possesses both the speed and footwork of a wide receiver, Reed has the potential to be the next great tight end who gives defenses fits week in and week out. With reliable hands as well (only three dropped passes on 59 targets in 2013), Redskins fans have lots of reasons to be excited about this kid moving forward.

Jamie Collins (LB) New England Patriots
If the Patriots are to have any success on the defensive side of the ball this year, sophomore linebacker Jamie Collins will be a major part of it. Emerging very late last season, he was on the field for 98% of New England’s defensive plays in the playoffs. Anyone who can gain that level of trust from Bill Belichick is worth keeping an eye on.

An extremely versatile defender, Collins can play linebacker while also lining up as a defensive end on either side of the line. He showed not just his abilities of getting to the quarterback and stopping the run, but also his knack for reading plays and being capable of dropping into pass coverage quite well. His teammate and fellow linebacker Dont’a Hightower has had nothing but praise for Collins, saying “He has a quick first step, quick hands. He’s strong. He’s explosive. He’s just a great all-around athlete.” The only question now is can he sustain that level of play over an entire season? I’m optimistic that he can, but only time will tell.

Eddie Lacy (HB) Green Bay Packers
As last season’s Offensive Rookie of the Year, Lacy will have great expectations to meet in 2014. However, this is a youngster who overcame injury problems early in the year only to bounce back and score 11 TDs and pile up 1,178 yards. But has he set himself up for a slumping 2014 campaign?

Well, the Packers do have a lot of depth at running back, which means Lacy doesn’t have to shoulder the entire load. With James Starks, Johnathan Franklin and DuJuan Harris, the Packers don’t have to burn Lacy out, as all three of those running backs were catalysts to Green Bay’s running attack last season. With that backfield still intact, Lacy is set up for a huge 2014 season.

Zac Stacy (HB) St. Louis Rams
Yet another running back appears on my list. What can I say? The young crop of running backs in the NFL these days is looking promising. Zac Stacy, who seemingly came out of nowhere last year to provide a spark for the Rams offense, might just be the guy on this list which I am the least concerned about having a slump in 2014.

He was consistently reliable throughout the season for St. Louis in 2013, but after drafting former Auburn running back Tre Mason this spring, some might be uncertain about Stacy’s potential production in 2014. However, it is known that Rams head coach Jeff Fisher thinks quite highly of Stacy, and it’s important to note that Stacy did what he did last year behind an oft-injured offensive line. That’s why I believe Stacy is primed for a big 2014 campaign.

Dee Milliner (CB) New York Jets
As a Patriots fans, when the Jets drafted Milliner last year I immediately thought to myself “Oh great… is this guy going to be another Darrelle Revis?” Honestly, he likely won’t be. But considering many expect him to be, that makes Milliner’s 2013 season all the more impressive.

In filling the shoes of arguably the best cornerback in the NFL over the past few seasons, Milliner stepped in seamlessly and showed his ability to blow up passing plays, using his long wingspan to his advantage. He missed some time in the first half of the season last year, but he is a future Pro Bowler in my eyes and could be a worthy replacement for Revis in the Jets secondary for years to come.

Kenny Stills (WR) New Orleans Saints
As if Drew Brees needed anymore help as one of the league’s top quarterbacks, along came Kenny Stills. He burst onto the scene last year – as a fifth round pick no less – and averaged 20.03 yards per catch. That is an astronomical amount for a rookie wide receiver, let alone any other veteran receiver in the league.

Stills, who has maturity beyond his years, is aware of what’s at stake in 2014, and he is ready to avoid the dreaded sophomore slump. Discussing the prospect of a slump occurring in 2014, Stills explained “That’s kind of the mentality I took to this offseason – making sure, like in college, you don’t have a sophomore slump…I gained a few pounds. My head’s been in this playbook. I’m so focused just on football.” Stills is undoubtedly prepared to have an even bigger season than he had last year, and that’s not good news for the rest of the NFC South.

Justin Hunter (WR) Tennessee Titans
A vastly talented and sizeable receiver, I believe Justin Hunter has a real future in Tennessee. His stats last year may not have been as glamorous as fellow sophomore receiver Kenny Stills, but Hunter showed flashes of brilliance in 2013. His specialty, as many of Tennessee’s opponents will discover in the coming years, is his ability to be a red-zone threat.

At 6-foot-4, Hunter will win most of the jump balls that come his way, with some comparing his size and ability to Bears wideout Alshon Jeffrey. If Hunter can amount to Jeffrey’s level of talent and production, I think Titans fans would be quite pleased with that. From what I see, Justin Hunter has the physical tools to be a great receiver in this league one day. So now it’s just a matter of whether new Titans head coach Ken Whisenhunt gives him enough chances to shine in 2014.

Desmond Trufant (CB) Atlanta Falcons
The 22nd overall pick of last year’s NFL Draft, Trufant brings some much needed youth to a Falcons secondary which had recently been patrolled by the likes of over-the-hill cornerbacks Asante Samuel and Dunta Robinson for the past few seasons. The younger brother of former Seattle Seahawk Marcus Trufant, Desmond had two interceptions last year to go with 17 pass knockdowns. He was – in what was a dreadful season for the Falcons – one of the few bright spots for Atlanta in 2013.

He proved last year that he is not just a speed cornerback, but that he can set the tone physically as well. We saw flashes of this when he roughed it up with 49ers receiver Anquan Boldin in a Week 16 matchup last season. In addition, considering how little help Trufant had around him on what was a feeble Falcons defense in 2013, Trufant’s performance last year was all the more notable. And with him being paired with another promising sophomore cornerback – Robert Alford – the Falcons may have quite the imposing secondary in the coming years.