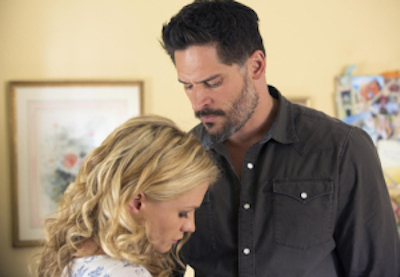 True Blood: “I Found You” and Boy Was it Hot

All right, I may be biased, but True Blood opened on Eric, the talented Alexsander Skarsgard who was last seen burning, and his fate was unknown.  Well Jason found him!  Eric and Jason start to banter, and then one of the hottest man on man sex scenes takes place.  I needed to pause for a cold shower.  As Jason and Eric are caressing, making out, licking, and as the scene build to a high point, and then Jason wakes up.  Jason drank enough of Eric’s blood to have one those naughty dreams, and I am pretty grateful.

Vince this supposed mayoral candidate who ran against Sam is attempting to mobilize the town against all the supernatural people on the show.  The human vs. supernatural aspect has always been a strong part of this show, but they always seem to pull or develop characters out of the clear blue.  How is this Vince showing up now?  Why this guy? Wouldn’t it have made more sense to have a character that was around throughout the run of the show, and connected to the characters?

True Blood always tries to create stories that are a sign of the times, and this times it’s the gun nut mentality going on in our modern world.  The humans in town overtake the police station; Kenya turns on her post and succumbs to the mob mentality.  Andy’s daughters Adilyn, along with Holly’s son try to fight the town, but they are locked up in the police station

Arlene, Holly, and Sam’s pregnant girlfriend are still in Fangtasia.  The Hep-V vampires, are one by one picking victims from the basement, slowly draining all of the human victims from Bon Temps.  Arlene recognizes the woman doing the reaping as her children’s 4TH grade teacher.  Holly and Arlene try to appeal to her “human” side and get her to help them escape.  As the Hep-V teacher tries to save them she says that she needed to feed on Arlene to get her strength.  As she feeds on Arlene she turns into a vampire pile of goop.  No such luck yet ladies.

The body that Sookie found at the end of last weeks episode was from St. Alice a nearby town.  Andy, Sookie, Jason, Sam, and Alcide take a field trip there because they can’t get a hold of the mayor.  When the new Scooby gang gets to St, Alice they find the town abandoned, well not abandoned but torn a part.  The town was ripped apart, and there was a pile of bodies in the middle of the town square.

Scooby, I mean Sookie and the gang start to explore the town, and end up at the house of the body of the women found in Bon Temps.  Sookie reads the diary and it seems to mirror her interactions with Bill, which is an interesting way to bring the show full circle.

Will Bon Temps end up like this town?  While this is an interesting concept, the show feels like its treading or trying to blend vampires and zombies too much.

Lettie Mae and the search for Tara

I am not sure if goood ole drug addict Lettie Mae, wants vampire blood to see Tara, or to get high, or a combination of both.  My guess is option number three.  Lettie Mae tries to get Lafayette to help her, but he will not, instead she decides to burn her hand and wake up Willow.  Willow gives Lettie Mae her blood, and she has a vision of Tara.  I must say Adina Porter who plays Lettie Mae always gives one of the strongest performances; she plays a great addict.

At the end of the day based on foreshadowing it looks like Sookie is going to go back to Bill her first love.  Guess she forget as God he basically almost killed her.  Why bother pairing Sookie and Alcide?

While I found the intro hot, was there a point?  Pam did find Eric in the end, and is infected with the Hep-V virus.  Looks like Eric and maybe Sam may not be around much longer based on the preview.

I like to the concepts the show provides but they never seem to tie them together neatly enough.  I feel as though they are biting off more than they can chew.  I had to get one vampire pun in there.  Thoughts?