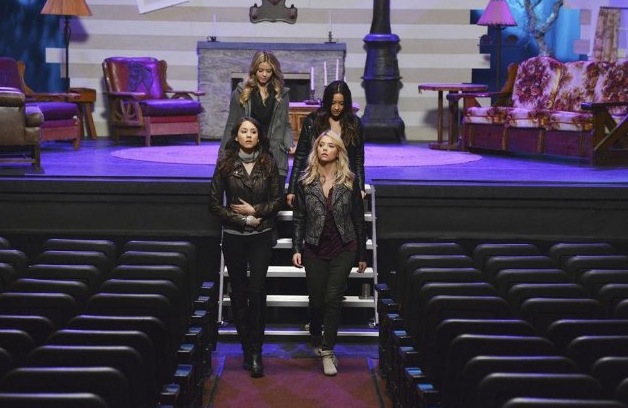 After four seasons of mystery and deception, the season five premier of Pretty Little Liars breathed new life into the show, while simultaneously taking the life of another. After being renewed for a sixth and seventh season, the show proved that it could answer the questions that have been dragging on while still asking even more. In the premier alone, there were revivals, resurrections, reveals and…a death. There really isn’t a good synonym for death that starts with an “r” or that would have been some excellent alliteration on my part.

Revivals: On the list of characters I’m glad get close to death but never die, is definitely Ezra Fitzgerald aka Mr. Fitz. He is too charming and handsome to be a high school teacher, let alone be dead, so I for one am glad he made it through surgery just fine. After he awoke from surgery, with Aria by his side, he gave away quite the spoiler when he saw Shana. Clearly he was saying, “Hey Aria, the girl behind you, the one who has way too much interest in whether or not I live or die, is clearly my shooter!” Unfortunately, the short brunette with great eyebrows didn’t pick up on his hyperventilating hints quick enough. Shana escaped giving Aria no time to warn the girls of the revelation.

Resurrections: Technically, the resurrection of Ali was revealed last season, but now all of Rosewood knows the presumed dead blonde is very much alive, which does not bode well for anyone. As Ali gets a page at the hospital, the liars decide it’s time for her to leave. She departs the hospital, only to be trailed by a hooded A. When A catches up to her, we finally hear him/her speak, just before he/she gets pepper sprayed by the other three girls. They of course, would never let Ali leave without back up. But A is one step ahead of them, and has back up of their own, in the form of ten other black-hooded A’s.

Reveals: With Ali back, a few more questions were answered, and a few more asked. On the side of the reveals is what happened the night that Emily was put in a box on a conveyer belt headed straight for a spinning saw. Turns out, Ali was around and asked CeCe Drake to dress up in her red coat to distract A while Ali turned off the saw. We also found out who exactly set the fire to the lodge. The answer: Shana, who revealed all right before her…

Death: When Shana caught up to the girls at the theatre, they were all on stage, terrified at the gun Shana had pointed their way. After a few terrified screams and pleas, Aria found her way to the stage where she picked up a rifle, not to shoot Shana, but to smack her on the back of the head. She fell of the stage, meeting her demise. Emily confirmed that she was really dead, and the girls consoled Aria, telling her what she did was necessary and not to feel bad about it. That’s how you know they’re good friends, they stick together through murder and manslaughter.

The girls believe that with the death of Shana means the death of A, but we know better. Shana was just one of many rivals the girls will have to face, and one of many questions that have to answer now that Ali is back. Now that Mona is building up her army and Melissa has a secret not even her father wants to know about, it looks like the liars are building up to a twisted season.