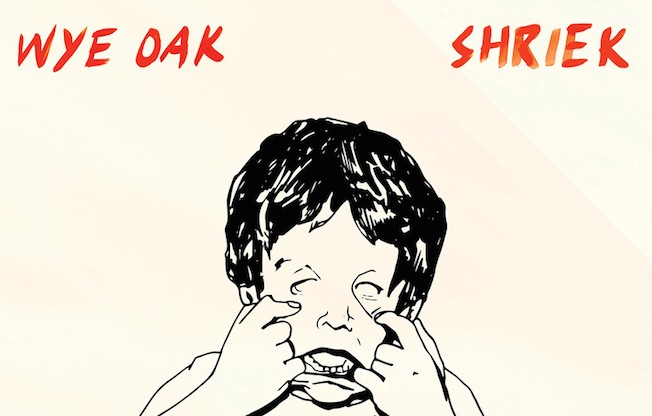 It’s been three years since we heard from Jenn Wasner & Andy Stack. 2011’s Civilian wasn’t necessarily a major commercial but it found success after The Walking Dead featured its titular track. However, in those three years, those two found something special in their sessions together leading up to Shriek and oh how grateful we should be. The project shows incredible maturity and ability for a band that has been flying in its own celebrate indie airspace for some time now.

To say this is a summer album would be an understatement. Its entire existence thrives on the changing seasons and coming into a new light both for the band and the audience. Usually, when you play a Wye Oak album, you’re met with something sonic; Jenn’s guitar is a force that can wail like sirens of the ocean while her voice sucks you in with a gentle caress of the cheek. You’re hooked into sprawling solos. 2009’s The Knot stamped the band’s signature sound with authority and set the stage for Civilian’s unquestioned praise. So, after all that incredibleness, what does Wye Oak do? They put the guitars down and pick up synthesizers and produce a lush soundscape.

Their new thesis is made pretty quickly with the one-two opening tracks of “Before” and “Shriek”, respectively. The depths of the tracks are impressive, setting the tone with extremely rich layering and building us up for what is just a pretty album. Vocals going between airy and direct while birds chirp in the background all over an ever-growing drum melody kick off the ten track exploration with a delight.

Following these are the two singles: “The Tower” and “Glory”. Alone, we couldn’t grasp just how’d they play into Shriek as a whole but now, within this new world Wye Oak has created, we find just how important they are. “Glory”, by far a standout already for single of the year, has Jenn reuniting with a sinister former, er, glory. “Oh no, is this another albatross? / He knows he holds dominion over me” could very well be a statement about the departure from the usually prominent guitar in their work. Even if there was any doubt with their sound, Stack’s percussions lends it hand to fill in the normally cacophonous gaps as highlighted on “Sick Talk”. His driving and pounding compliments the dream pop aspect wholly.

There’s a drone portion to the album that creeps up as we get further down the list. In “School of Eyes” we find an organ echoing throughout, bedding the track as it unravels into noise in the bridge. The distortion continues with “Despicable Animal” leading up to “Paradise”, easily my standout track. Andy runs a showcase on how to build melodies while Jenn brings back her guitar for an array of feedback on a track that’s peppered with hard, filtered vocals that break into echoing sighs. It’s the culmination of old and new, packing quite a punch this late in the album. Following this sentiment, we find “I Know the Law” relishing in the noise with nearly forty-five seconds of nothing but ending the track.

Shriek is a wonderful statement to Wye Oak’s career so far. To be able to walk the line of radio-friendly and artistic merit is a feat in and of itself but also growing while doing that high-wire walk speaks to their style. Jenn & Andy have been able to weave themselves throughout multiple spectrums and this recent effort is a testament to that. This new soundscape we find ourselves in with them can only make me hope we see more progression in this direction because it’s deserving of development, if not at least a companion piece. Ha, here I am already wanting more.