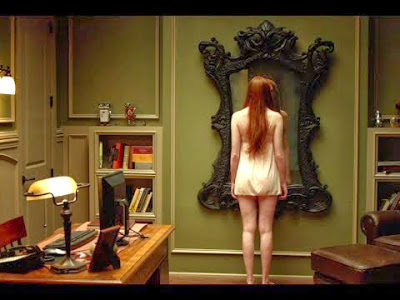 Through the Looking Glass: Oculus

I’m pretty sure that most people going into a film about a “haunted” mirror would assume that it would be relatively silly and full of reflection-based scares. If we were talking about Mirrors or its sequel, you would be entirely correct. In the case of Oculus however, this couldn’t be farther from the truth.

Following his shoestring budget project Absentia, which gained some fairly decent buzz, Mike Flanagan adapts his former short into a full-length, big-studio horror flick. However, the one thing that actually makes this picture stand out from the herd is its non-traditional narrative.

Oculus opens with the release of Tim Russell (Brenton Thwaites) from an asylum, where he has been locked away since childhood due to a traumatic experience with his deceased parents. He quickly reconnects with his sister Kaylie (Karen Gillan), who immediately sets out to reverse all the “progress” he’s made in making sense of the mysterious event. The reconnected siblings then have a conflict of opposing memories. Tim, thanks to his psychiatric recovery, has come to terms with the demise of his parents gone mad (which are brought to screen by the impressive performances of Katee Sackhoff and Rory Cochrane) and has decided he was responsible for the death of his abusive father. Kaylie has remained obsessed with blaming an evil mirror that the family acquired at that time.

Tim agrees to Kaylie’s supposedly foolproof plan to prove the mirror’s evil power. The siblings spend the majority of the first act debating whether or not the mirror is evil, setting up the rules to the experiment and revealing the mirror’s horrid history. Through this discussion, the audience learns that the mirror is less of a haunted gateway and more of an evil totem that mentally breaks down its victims and warps reality.

The debate between the rational and the paranormal enacted by Tim and Kaylie would be interesting enough fodder to fill a whole movie on its own, but the siblings get a new taste of the mirror’s power, and that is when the film gets really interesting. From that point on, the linear structure of the film entirely breaks down. The distinction between madness and reality is blurred, and this is used to break down the characters’ emotions and logic, as their confused paths mirror their childhood memories.

It is this structure that really impressed me, as it is rather seldom that a movie, especially one with as much mainstream advertising as Oculus, is willing to be so ambiguous about the true nature of what transpires. It is this subtle approach to madness-inducing paranormal horror that reminds me less of Mirrors and more of the evil hotel horror, 1408. What differentiates the two is that while the film 1408 decided to rely on visual tricks and thrill ride scares to convey its source material, Oculus hems much closer to the Stephen King short story and employs a faltering sense of reality and intense mood to create unease. The result is that not only do we witness our characters’ loss of perception, but our own confusion helps us relate with their plight.

Additionally, the film relies on its own atmosphere to chill the audience and rarely resorts to jump scares. There has been a recent trend of dialing down the jump scares (eg. The Conjuring) that most horror has been over-reliant upon and I hope it continues, because it brings horror back to its roots and makes it feel less cheap and more memorable.

I feel that the film is only marred by a few things. One of my nit-pick items is the inclusion of relatively unimpressive-looking ghosts. On top of that, this horror movie follows in many of its predecessors’ footsteps and has an ending that becomes fairly obvious. This seems to be the shortcoming of a lot of horror flicks, and is one that I think most fans of the genre have gotten over by now.

Oculus will probably not go down in the books as a classic and will likely be forgotten by many in the following years, but it definitely pumps some creativity into a genre that, until these last few years, had almost no mainstream pictures that were even worth watching.  Its inspired take on traditional storytelling manages to really get to the heart of what true horror would result in. That is, falling into a pit of madness and despair in the face of overwhelming fear. It also reveals how impotent the logic people rely upon can be when reality breaks down and true madness prevails. I will definitely be following the future career of this director with rapt attention.