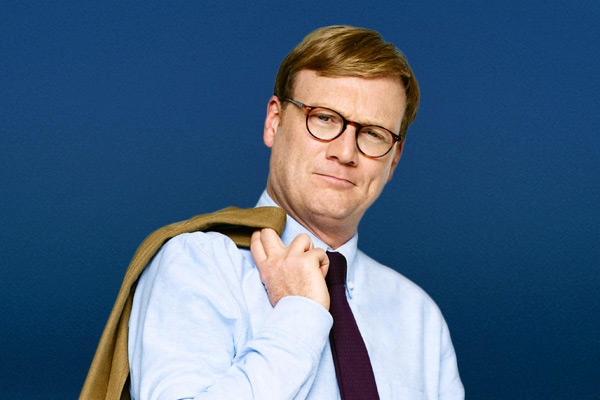 The first time I was able to put the name to Andy Daly’s pasty visage, which had been appearing in guest bits as the earnest comedic foil for over a decade, was when he appeared on Marc Maron’s comedy podcast a few years ago. At that time, Daly was in the midst of his brilliant run on “Eastbound and Down”, playing the emasculated third leg of Kenny Powers’s love triangle with his high school sweetheart. Maron noted rightly during the interview that Daly had cornered the market on that button-upped guy the audience is lusting to see lose his shit.

Daly giggled with delight and admitted, “There’s nothing in life I love more than that [Losing my shit]”. If you’ve seen him steal scenes on “Eastbound and Down”, you’re well acquainted with how masterful he can be when the buttons fly off and Principal Cutler reveals the mess underneath that tight collar. Simply refer to his sex scene – a literal decollaring – in the cold open of episode 104 to understand how talented this actor can be when his straight-man act dissolves before our eyes. There might not be anyone around better at this particular metamorphosis than him.

So, it’s gratifying to see Andy Daly finally inhabiting the starring straight man role that has eluded him since he first appeared on “MAD TV” nearly fifteen years ago. On “Review”, one of several awesome Comedy Central developments as of late, and an American remake of an Australian hit, Andy Daly plays an archetypal critic named Forrest MAcNeilm, a stodgy, introverted man with an extensive vocabulary. The twist, of course, as Forrest explains during the titles, is that he reviews life experiences rather than particular works, which are picked indiscriminately by his producer from audience suggestions.

Keep in mind this is all within the framing of the show within a show, which can sometimes feel absurdly detached from the reality in which it inhabits. We as the audience must expel disbelief that Forrest’s family and friends aren’t actually watching or paying attention to his review show, since it would change how they interpret his highly volatile behavior. Who actually watches Forrest’s show in this world? Perhaps no one, perhaps it’s in syndication on some alien planet or alternate universe. I don’t know, and I don’t care for them to try and explain. It would just defeat the delightful absurdity of Forrest’s many misadventures.

Each episode consists of one to three “audience” suggestions for Forrest to review. Each of these involves Forrest and A.J. Gibbs, his resident Vanna White played hilariously glib by Megan Stevenson, set in front of cheesy green screen discussing the next review before Forrest just walks off the set, past the crew and out the door to commence his review. Then, upon completing each life experience to uproarious effect, he returns to set to deliver his review on a simple five star scale.

The most entertaining aspect of this show, however, is the degree to which Forrest’s personal life is upended by these reviews that he is contractually obligated to complete, none more so than the series altering episode “Pancakes, Divorce, Pancakes”, in which someone asks him to review “Divorce”. Of course, Forrest remains madly in love with his wife when he has to confront her with a “need” for divorce. At first, she is devastated, but ultimately, she rather callously comes around to the idea of separation. This places Forrest in a rather uncomfortable position, as he had hoped it would only be temporary.

There’s a cumulative effect that occurs with Forrest’s undertakings, as each episode’s reviews continue to pile upon the ruins of the poor sap’s existence. We’re left to wonder if Forrest can ever ditch his newfound cocaine addiction or get his wife back, or even engage in a friendly conversation with her at this point. The degree to which he’s already ruined his life might not bode well for the show’s legs, since rock bottom generally runs the risk of becoming monotonous.

And yet, despite the inherent risks in something so high-concept, at this point near the end of the first season, it’s hard not to be consistently drawn back to Forrest’s consistently hilarious endeavors. There’s just something timeless about watching Andy Daly’s buttons pop from his collar.