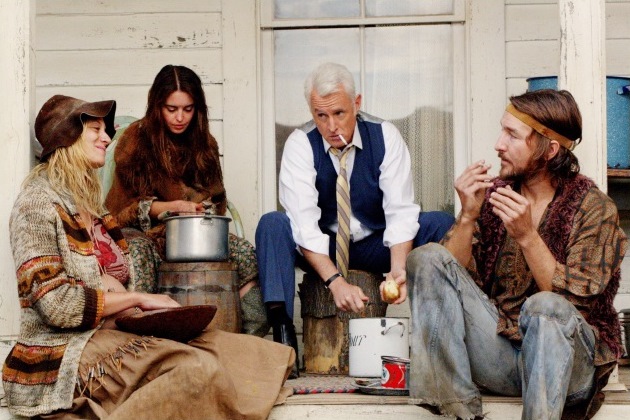 After a less than warm welcome Don Draper has fully returned to the offices of SC&P, but things are not back to normal just yet. At first glance, the episode feels like a throwback to the good ol’ days of Sterling Cooper. Bert is shuffling around, Roger and Joan are flirting, Peggy is bossy everyone, and Don fixes himself a drink. It looks like they got the whole band back together. Like everything on Mad Men, however, things are much darker below the surface. Pete has proven himself to be actually useful out in Los Angeles and has brought a new fast food chain to the company. The partners decide to make Peggy in charge of the pitch, hoping to appeal to stay-at-home-moms, while Roger insists that Don be part of the pitch team as well. Putting the bitter student in charge of the very bitter master.

Don is already having a bit of a day, arriving at the office to find some major construction under way, The other partners, without consulting Don, have bought a computer in an attempt to bring the company in the future. The sleek machine, all 2000 pounds of it, is to be installed in the creative lounge, putting everyone on their toes. If creative types are prone to one thing, it’s over thinking, and now the new guys are just as paranoid about their future as Don. Determined to charge ahead, Peggy tries to wrangle her team, only to be immediately blown off by Don. Things are getting backstabbing and manipulative, because it’s not Mad Men if everyone isn’t silently furious at each other.

Meanwhile, Roger gets an unexpected visit from his ex-wife Mona. She arrives at the office to inform him that their daughter has run off with a bunch of hippies, leaving her child behind. Despite having been far from the perfect parents, Roger and Mona pile into the car and head out to retrieve their daughter from the grips of the dirty hippies. They find her at a commune upstate, having rechristened herself Marigold and now spouting new age proverbs that would make Deepak Chopra blush. Mona decides to try the approach of talking to her 30 year old daughter like she’s 12, which fails quite spectacularly. Roger, ever the charmer, decides to to mingle with the unwashed masses, as surly his three piece suit and smooth cheeks will be enough to convince them that capitalism is way to go. Roger and his daughter do bond over their mutual unhappiness, but he is unable to convince her to return to her life, continuing the Sterling tradition of terrible parents. The hippie commune is just about the most broad that Mad Men has ever done, but given the production teams much publicized attention to detail it must be based on a real location, which make the whole thing even stranger.

Back with Team Peggy, Don is doing everything he can to subvert the assignment, to the point of flat out refusing to show up to a meeting or do any actual work. instead Don grabs a bottle of vodka from Roger’s office deices to drink the afternoon away. Desperate for someone to share his misery, he calls up Freddy Rumsen, whom Don has been ghostwriting for, and bagers him into going to see the Mets play. Freddy arrives, awakens Don from his stupor, and tries to get him out of the office before he can embarrass himself. Don manages to get one out one metaphorical rant towards the computer technicians, before Freddy gets him back to the safety of his apartment. Don passes out, and in the morning wakes up to find Freddy waiting with a cup of coffee and a pep talk. And when Freddy, a character who spent years as the office joke/punching bag, has to tell Don to get his shit together, it means things are really getting bad. Don drinks his coffee, slicks his hair, and heads into the office. Once there, he sits down at the typewriter, and starts pounding away at the taglines that Peggy wanted. it’s going to be a long climb for Don to get back to the top at SC&P, and he is going to have to take so much crap along the way.